By now, most of our readers will know that we anticipated last week's stock market "correction" and that we communicated it weeks ago. Our updated alternate futures chart below confirms how closely the real world followed our forecast: 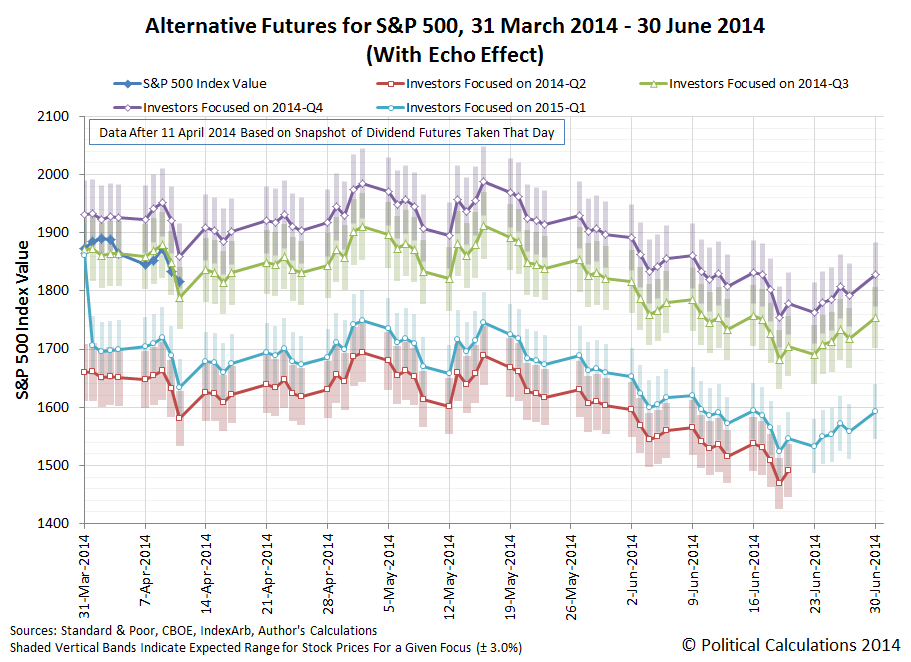 That's why we were fascinated to read Barry Ritholtz's take on the event, which he later reposted on his blog:

Whenever we see any sort of disruption in markets an explanation usually follows. The headlines will explain that “Markets are going up/down because of this good/bad thing.” News anchors will solemnly intone why the volatility is significant and what it means for one thing or another.

None of these casual explanations can withstand close examination. They are often things that have existed for months or years, and so can’t account for what happened yesterday.

Stocks are fully valued, and have been for a while, so why is it that valuations suddenly matter after not mattering at all? The market for initial public offerings is too hot? Wait, the Federal Reserve is going to end quantitative easing, something it has been warning us about for two years? Now it suddenly matters?

Of course, all of these narratives serve a singular purpose: They give the appearance of meaning and rationality to actions that are meaningless and irrational. The daily action in the markets is a form of noisy, random, Brownian motion. If you are looking for a clear reason as to why stocks did what they did, then you are in the wrong line of business.

Normally, we would be in full agreement with Barry's assessment. But because we're in such a unique position of having seen what happened in the market all last week coming well in advance of its arrival, we probably can provide more insight into the nature of the event than the ordinary market observer.

We would describe it as being much like an aftershock to an earthquake. Except in this case, the aftershock was more pronounced than the original shocks, thanks to a confluence of factors from both a year ago and from a month ago.

To understand why takes getting into the math behind how stock prices work, which we'll let you do on your own.

In this case, we're fortunate in that the volume of noise in the stock market is relatively low while investors went into the event strongly focused on the future quarter of 2014-Q3 in setting today's stock prices, which ends just under five months from now.

The basic explanation for the event can be found in the financial news reports that coincide with the various factors that would be entered into our math, for which we're confident that you can successfully use a search engine like Google to identify. If it helps, because the calendar is involved, so is the bond market. You will specifically be looking for events where capital flows would have moved money between the stock and bond markets, where you'll find synchronized changes in stock prices and bond yields, where both suddenly rose or fell together in response to the specific real world events that drove the markets at those times.

We say the event is an aftershock because the investment decisions that were made at these times tied up the money associated with them, where maturity and option expiration dates had to be reached before new actions could be taken based on newer information.

And that is pretty much the how, when and why of what happened in the markets last week, which to us, are the more interesting aspects of the event.

The good news, if you can call it that, is that the market fell by less than our model forecast on Friday, 11 April 2014. While still well within our expected range (indicated by the green-shaded vertical error bars for investors focused on 2014-Q3 in our chart above), the positive noise here will contribute to dampening future aftershocks. From our perspective, it would appear that the event is largely over.

That's not to say that stock prices couldn't still move downward in the near term, as could happen with the arrival of a new and negative noise event or if investors were to shift their focus away from 2014-Q3 to either the nearer term 2014-Q2 or the more distant future of 2015-Q1. And speaking of 2015-Q1, now that we have the finalized value for dividends paid in 2014-Q1, we've made our quarterly adjustment to the expected change in the growth rate of dividends per share for that future quarter. 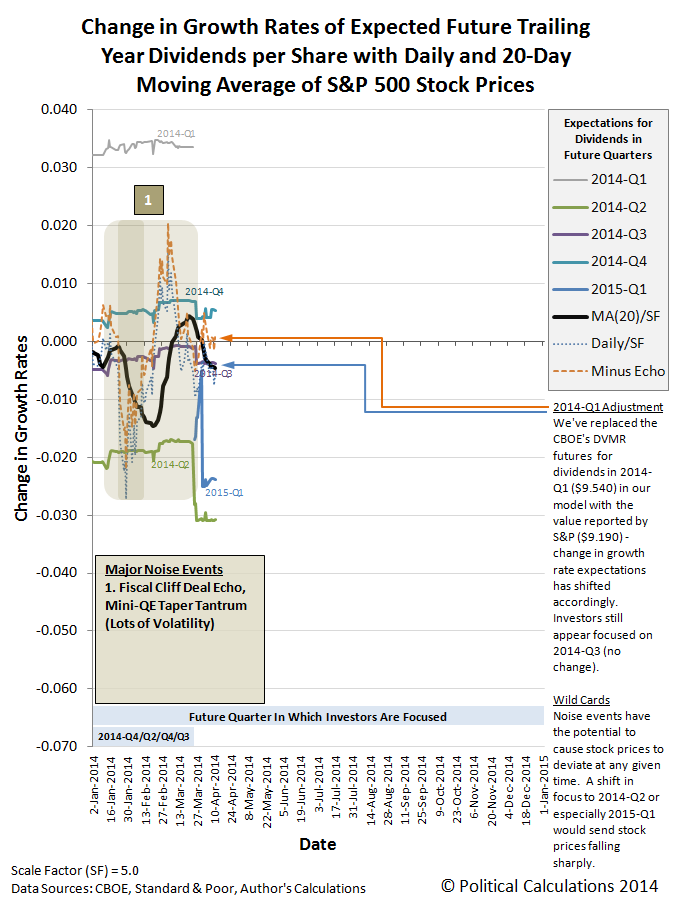 As a final note, we'll observe that this most certainly isn't the first that time we've successfully charted the future course of the stock market or correctly called turns in it, which even Barry Ritholtz would have to admit is quite the parlor trick for something so seemingly impossible.

But our really long time readers know that the truth of how we do what we do is far more unsettling....