Political Calculations
Unexpectedly Intriguing!
15 May 2014
Quantifying "Affordability" According to the National Association of Realtors

The WSJ's Real Time Economics blog recently caught our attention with the following headline: Why the Nation's Hot Housing Market Is Cooling Slightly.

After wiping down our monitor after our initial spit-take, we found it to be a fairly decent article, summarizing much of what we've observed and reported upon in the nation's housing industry months ago. But then, we had to wipe down our monitor again as we read the following section:

“One of the reasons that demand appears to be slowing is that the pace of previous home-price increases has negatively affected affordability,” Mr. Lawler said. “And some of the previous year-over-year gains were from depressed levels when there was a lot of distressed inventory on the market.”

Economists have differing opinions on the extent to which price increases have made homes less affordable for buyers. Interest rates are higher, with the rate for a 30-year fixed-rate mortgage now at 4.21%, up from 3.42% a year earlier, according to Freddie Mac. Mortgage-insurance fees also have increased.

However, the Realtors association argued Monday that homes remain affordable, noting that a buyer purchasing a home at the first-quarter median price with a 5% down payment would need an income of $44,200 to land a mortgage. With a 20% down payment, the necessary income is $37,200, the group said.

To understand why we needed to wipe down our monitor again, let's turn to Barry Ritholtz' classic unloading upon the lack of utility offered by the National Association of Realtor's Housing Affordability Index:

In the past, we have discussed how worthless the NAR’s Housing Affordability Index is. This weekend saw an odd column in Barron’s that was suckered in by the silliness of that index.

This suggests to me it is time to take another pass showing exactly why this index has so little value to anyone tracking housing values and affordability. let’s begin by going back to our 2008 analysis:

“The index as presently constructed is utterly worthless. It provides little or no insight into how affordable US Housing actually is. Further, what is omitted from the index is especially relevant to the problems occurring in the housing market today. The Index fails to account for — or even recognize — any of the out of the ordinary circumstances that are currently bedeviling the Housing market.”

That’s not the worst of it — during the huge run up from 2001-2007, there was but one month — ONLY ONE MONTH! — where the NAR said homes were not affordable!

Only One Month When NAR Said Homes Were Not Affordable 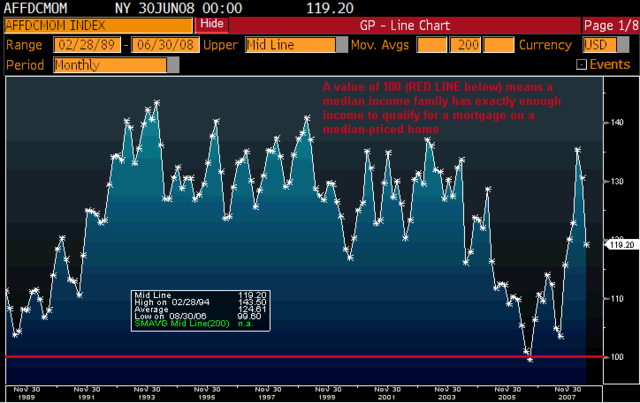 Going by the chart, the only time the National Association of Realtor's Housing Affordability Index ever suggested that housing prices were not "affordable" by their standards was in late 2005.

Let's review how the median sale prices of homes evolved with respect to median household incomes since 2000: 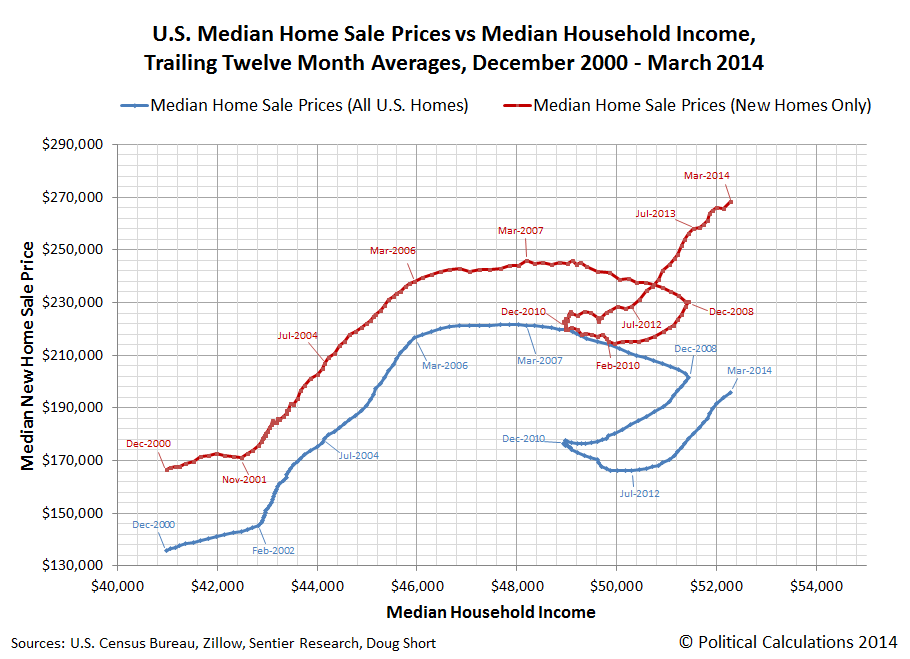 Using the values provided by the NAR for an individual purchasing a $191,600 home with a 30-year mortgage at 4.21% with either a 5% down payment at an annual pay of $44,200 or with 20% down with an annual income of $37,200, it would appear that the main qualification the National Association of Realtors places upon determining whether a home is within the reach of affordability for a potential buyer is whether the homebuyer is willing to contribute as much as 24% of their annual income toward just their mortgage's principal and interest payments for thirty years.

By contrast, we've already demonstrated that the typical share that U.S. homeowners actually dedicate of their annual income toward home ownership is 10%, which is what most Americans would say defines the real line of affordability for the cost of owning a home.

The difference between these two figures is why the NAR's housing affordability index is such a poor indicator of housing affordability. But then, these are the same people who insist that there has only ever been one month in all of U.S. history in which there was a better time to buy a house.