Political Calculations
Unexpectedly Intriguing!
16 June 2014
Noise Past and Present for the S&P 500

The stock market, as measured by the S&P 500, behaved fairly predictably in the week ending 13 June 2014. From all appearances, it would seem that investors are presently focused on the expectations associated with the fourth quarter of 2014 in setting today's stock prices. Which is both good and bad: 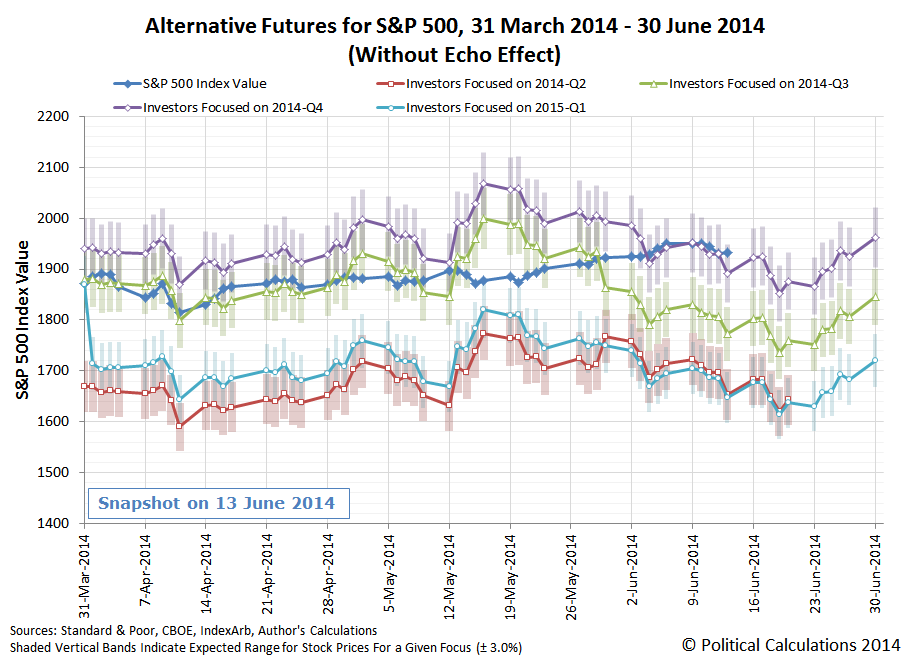 It's good in the sense that focus on this quarter would correspond to the best case scenario for investors. It's bad in that anything that might cause investors to shift their forward-looking focus to another point of time in the future would coincide with falling stock prices.

Behind the scenes, we're starting to get a read on what the expectations are for 2015-Q2, but we won't have a more complete picture until after the dividend futures contracts for the second quarter of 2014 expire on 20 June 2014. For all practical purposes, the expectations associated with 2014-Q2 are no longer affecting stock prices.

Looking at our alternative futures chart above, which presents the most likely trajectories that the S&P 500's index value will track when investors are collectively focused on a particular future quarter, we see that stock prices in the most recently ended week pretty closely tracked the trajectory defined by a focus on 2014-Q4 on Monday through Thursday, but not on Friday.

That kind of deviation we see on Friday, 13 June 2014 is often the result of a combination of current day noise and the artifacts of the historical data we use in the math to develop each one of these trajectories (we've quantified that combination of noise and artifacts to some extent, which we show as the range about each basic trajectory that really represents where we expect stock prices to track).

For 13 Friday 2014, the apparent deviation between forecast trajectory and actual path for the S&P 500 is mainly the result of historical artifacts in the data for the forecast. As such, in this situation, we should expect that the S&P 500 would follow the short term trend indicated by all the other forecast data points around it rather than follow the exact trajectory of the forecast.

At least, until an outburst of current day noise or other event that might cause investors to suddenly shift their focus to a different point of time in the future would force stock prices to follow a different path. And if you think about it, it is the random occurrence of those kinds of factors that are really the thing that drives the stock market's large scale randomness over time.