We've had quite an exciting time observing the S&P 500 during the past week, because it would appear that investors suddenly shifted their forward-looking focus in setting stock prices from the expectations associated with the third quarter of 2014 to those associated with the fourth quarter.

But don't take our word for it. Our chart below reveals the shift that occurred on Friday, 29 May 2014 at approximately at the same time that the expectations for the amount of cash dividends that would be paid in both 2014-Q2 and 2014-Q3, as measured by the Chicago Board of Exchange's DVJN (currently representing 2014-Q2) and DVST (2014-Q3) dividend futures options, changed pretty significantly at that time. 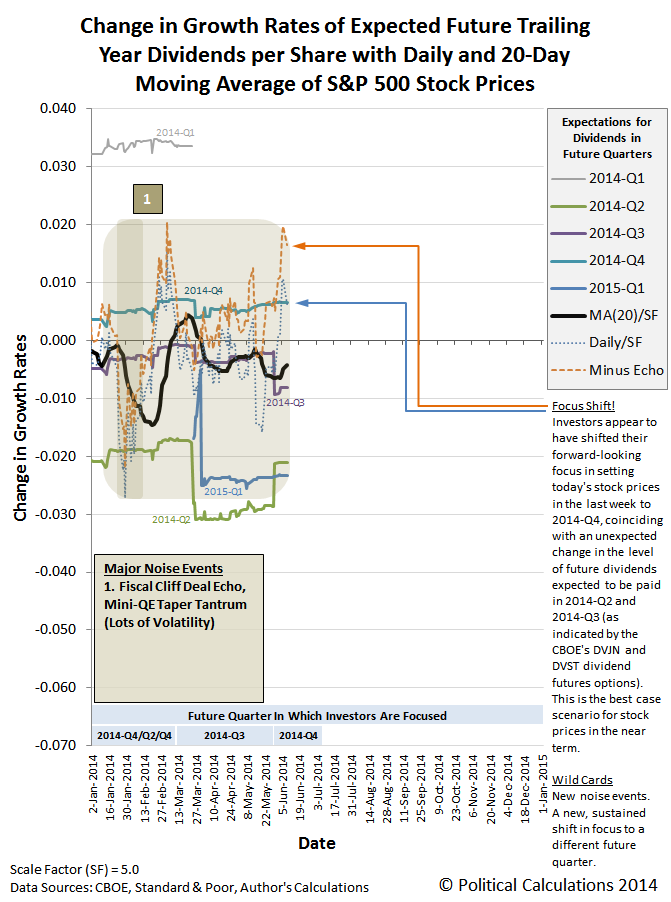 We first observed the unusual shift for the expectations for 2014-Q2 and 2014-Q3 last Friday, 29 May 2014, but at the time, we thought it might be a pricing anomaly. That's something that we've seen before with the CBOE's dividend futures options, which would appear to coincide with periods of extremely low volumes in trading activity. When they've happened, a sudden and otherwise unexplained large shift in value for these options is recorded, but evaporates within several trading days after options traders finally recognize the money-making opportunity created by the pricing anomaly (as sometimes, the market is nowhere near as efficient as Eugene Fama thinks it is). That the shift in expectations for 2014-Q2 and 2014-Q3 persists so many days later suggest that's not the case for this event.

One thing to note about these changes in future expectations is that they didn't impact stock prices at all, since investors would appear to have shifted their focus in setting stock prices to 2014-Q4 during the past week.

The best way to see that is to visualize the data and put it into motion. Our animated chart below shows how the alternative futures for the S&P 500's stock prices shifted with the changes in investor expectations during the past week:

Here, the first frame of the animation is the alternative futures chart we presented last week, without the echo effect (since that scenario so far appears to better describe how stock prices have evolved since the end of 2014-Q1), and the second frame follows the changes in the underlying dividend futures data over the week ending Friday, 6 June 2014. What we observe is that stock prices are now tracking along with the expectations associated with a focus on 2014-Q4, while the alternative futures for what stock prices would be if investors were focused on 2014-Q2 or 2014-Q3 instead have altered their trajectories rather dramatically with no apparent effect upon stock prices.

Overall, the apparent shift in focus that occurred in the last week represents the best case scenario for stock prices in the near term, as they would seem to have delayed the arrival of June 2014's summer doldrums.