As a general rule of thumb, when you're working with relatively good quality data, it takes a minimum of six to ten data points before you can reasonably identify if a statistically significant trend exists within the data you might be following.

Looking at the most recent data for the developing trend of median new home sale prices with respect to median household incomes in the U.S., we're about one month shy of the minimum threshold we need to tell if a new linear trend has become established in the U.S. real estate market following the end of 2013. 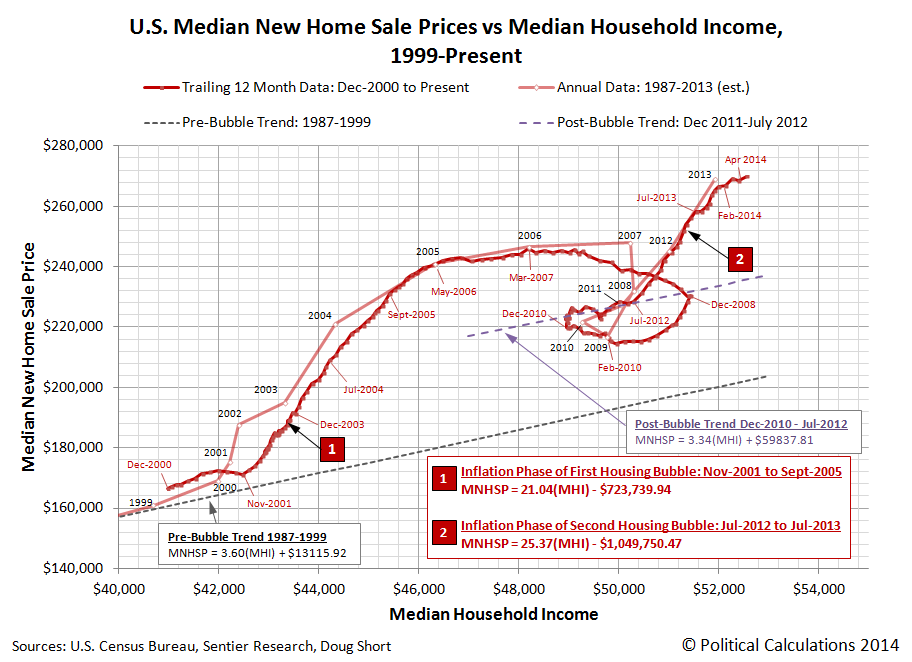 Although technically, we could probably make that determination with the data we have today, where it initially appears that the data from January 2014 through May 2014 is close to parallel with the stable trend that existed from December 2010 through July 2012, prior to the inflation of the second U.S. housing bubble. If a new stable trend develops, it would be a very positive development for the U.S. housing market, as another major collapse in home prices would be unlikely.

Provided of course that Americans can earn the kind of income it takes to pay the monthly mortgage payment for the median new home being constructed in the U.S. these days. Like the housing bubble in London, it takes much much more than the average income earned by individual Americans to be able to really afford the typical new home being built in America today.

Sentier Research. Household Income Trends: May 2014. [PDF Document]. Accessed 2 July 2014. [Note: We have converted all the older inflation-adjusted values presented in this source to be in terms of their original, nominal values (a.k.a. "current U.S. dollars") for use in our charts, which means that we have a true apples-to-apples basis for pairing this data with the median new home sale price data reported by the U.S. Census Bureau.]