What does it mean when the trends for non-farm payroll jobs and total employment in the U.S. are on two separate and diverging tracks?

We're asking that question today because of something we've observed in the data for the state of Illinois while working on a different project. The chart below shows what we found when we looked at that state's total employment numbers and nonfarm payroll jobs since December 2012. 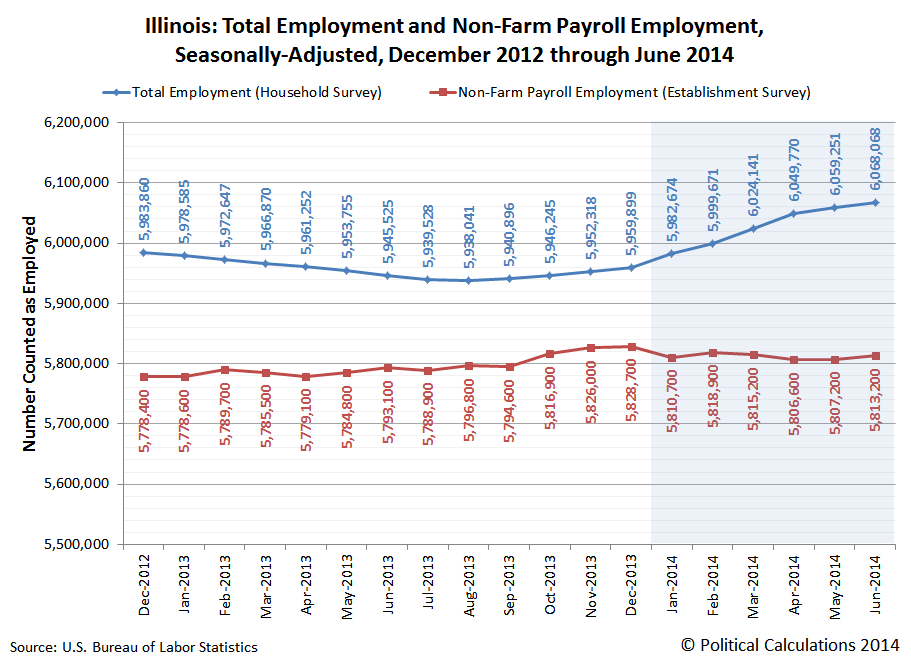 Here, we observe that the trends for the state's total employment and for the state's non-farm payroll jobs would appear to be on diverging trajectories over time. As we've previously discussed in considering the differences between the Household and Establishment surveys that document employment trends in the U.S., that pattern is largely due to cyclical factors related to turning points in the economy:

One other factor that can contribute to differences between the two surveys' reported data is driven by cyclical factors, which are often present during economic turning points, such as the beginning of recessions or periods of economic expansion. Here, during recessions, the Establishment survey will show job losses as recessionary conditions take hold and workers are laid off, while the Household survey will show gains as those displaced workers move into the kind of marginal employment that is captured by that survey.

That script gets flipped when an economic recovery takes hold, as establishments boost their hiring, pulling workers out of marginal employment, with the results showing up in the data as job gains in the Establishment survey but as a falling level of employment in the Household survey.

But those improving conditions for Illinois' labor market would appear to have reversed since the end of 2013. Here, the number of people employed in non-farm payroll jobs have declined while the total employment figure for the state has increased rather dramatically, which suggests a massive increase in the number of people who are marginally employed in Illinois beginning in January 2014. The chart below takes a closer look at the recent trend in Illinois' employment situation. 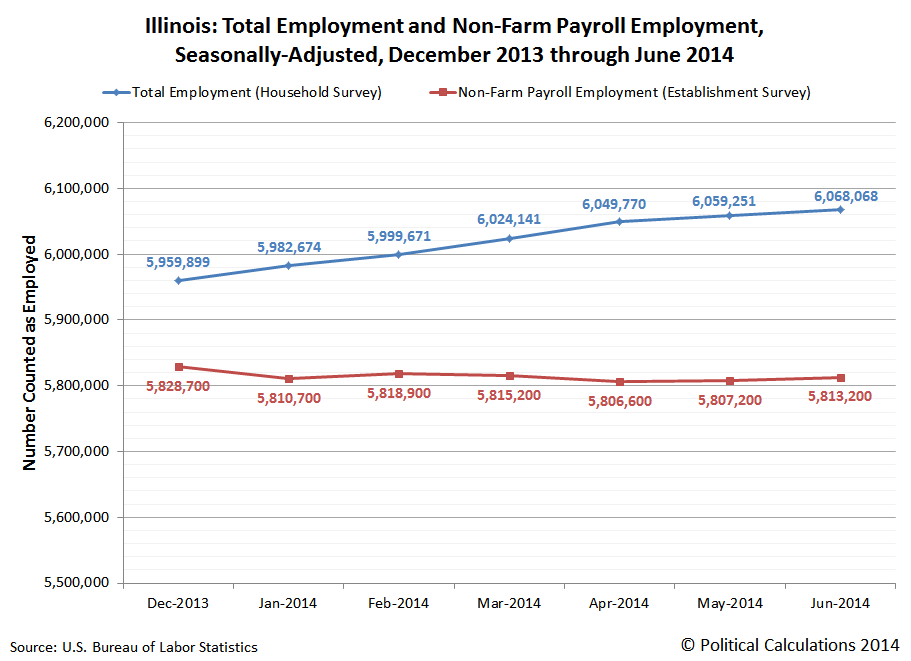 Although the data for non-farm payroll jobs and total employment are based on different surveys and cover different portions of the civilian U.S. labor force, we're going to treat them as if they do fit neatly together like jigsaw puzzle pieces in the following analysis to get a sense of how the number of newly created jobs in Illinois would have had to change in order to produce these figures. The chart below shows the change in the number of people counted as being employed for each data series since December 2013. 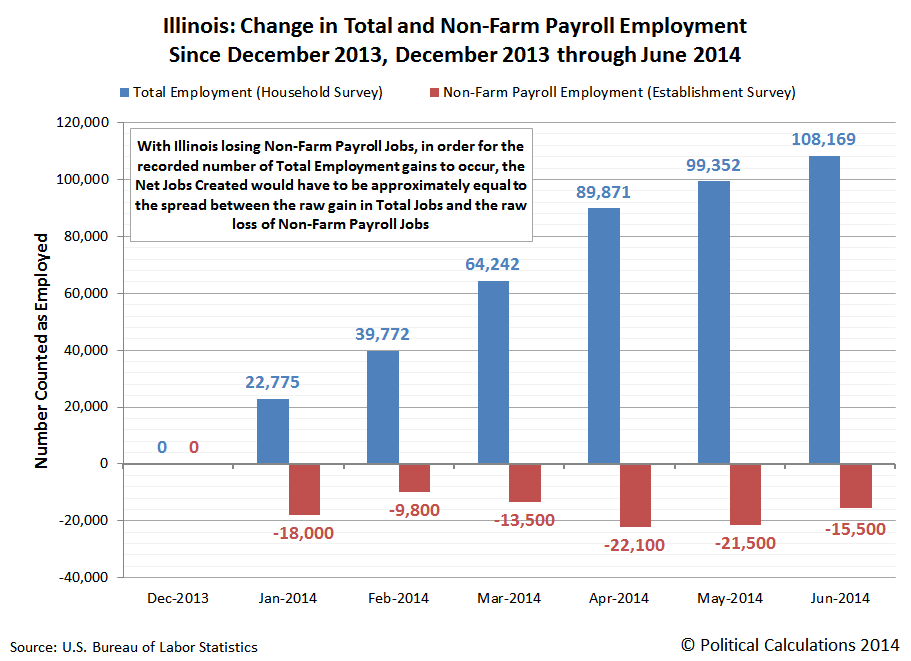 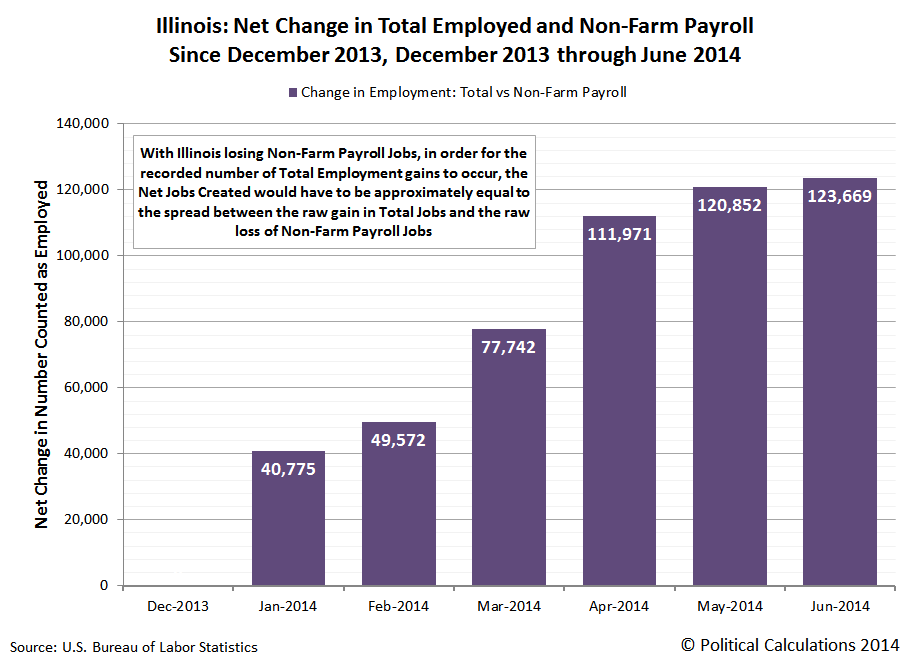 The curious thing here is that the magnitude of the net increase in the number of marginal jobs in Illinois through June 2014 is over eight times greater than the actual loss of non-farm jobs at Illinois' establishments during the same period of time. That difference suggests that what we're seeing isn't the migration of workers from establishment to marginal employment after being laid off, but rather a large scale increase in the number of people in Illinois from outside of the state's employed population into marginal jobs that have been created since the beginning of the year.

Where that extra population of job-finding Illinoisans came from will be our next stop in this series.