In previously analyzing what broke the job market in the United States, we pointed to the passage of the Patient Protection and Affordable Care Act (more popularly known as "Obamacare") and offered a hypothesis for why the number of part time jobs in the U.S. has not increased with the economic recovery from recession as many had predicted.

But it is evident that the feared outcome of more part time jobs being created at the expense of full time jobs has, at least since the Fed began stimulating the U.S. economy through its various quantitative easing programs, has not come to pass. What we observe instead is that it is part time employment that has not increased in any meaningful way since Obamacare became law.

So we'll offer a hypothesis for why that might be: the Affordable Care Act's lowered definition of the number of hours that need to be worked in a week to qualify as full time employment is leading employers to create considerably fewer jobs where the number of hours worked falls in the range between 30 and 35 hours per week.

That range is significant because the Bureau of Labor Statistics and the U.S. Census Bureau, who collect the data on the number of Americans working in full time and part time jobs, did not change their definition of the number of hours of work each week that qualifies as full time employment: a minimum of 35 hours per week.

It is then that part of the job market that Obamacare has broken, and there is some evidence that the U.S. job market is not adding a meaningful number of jobs within that margin. And we suspect that the absence of jobs being created within that margin plays a big role in the assessment of Americans that there is and has been no meaningful economic recovery since the official end of the last recession.

Today, we're going to make the transition from noting that there is "some evidence" to instead note that we now have "definitive evidence". Here's the proof of our hypothesis, in which we've visualized the data for the number of Americans counted as being employed in part time jobs by the number of hours they work each week for the years from December 2008 through the present. 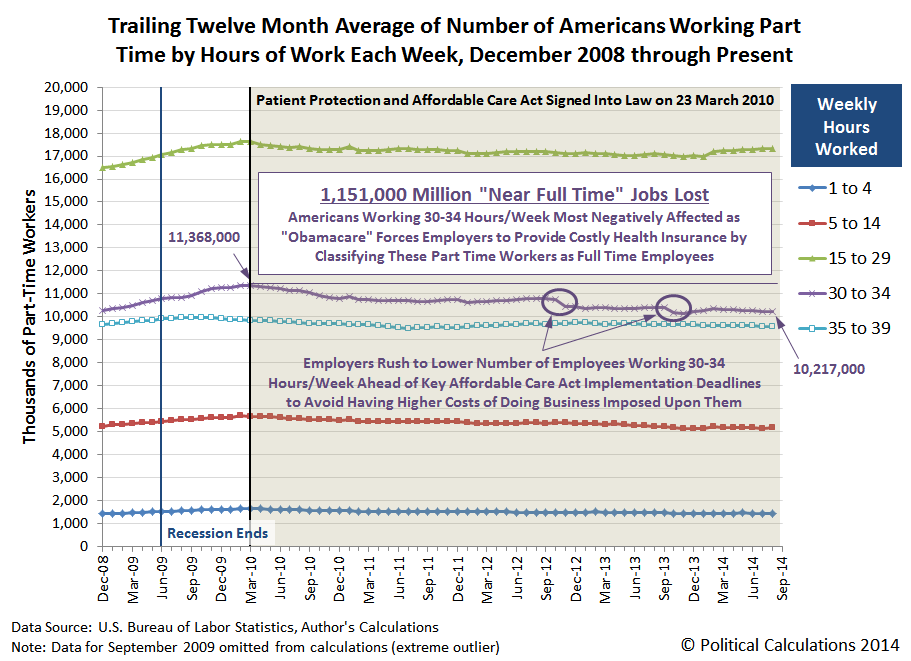 In this chart, we've taken the non-seasonally adjusted data reported by the U.S. Bureau of Labor Statistics in their Employment and Earnings reports for each month from January 2008 through August 2014 and calculated the twelve month trailing average of the number of Americans counted as being employed part time by the number of hours they work each week, which allows us to account for the effect of seasonality in the data. In doing that, we omitted the data for September 2009 from our calculations because it was such a clear outlier for the surveyed data results.

Having done that exercise, we can use the graphed results to verify that the passage of the Affordable Care Act (ACA) is principally responsible for the deterioration of the part-time job market since it was signed into law on 23 March 2010.

What we observe is that the number of Americans employed part time peaks in March 2010, just as the law was passed. After that time, employers began reducing the number of people on their part time payrolls pretty much across the board, but most significantly for those working "near full time" - between 30 and 34 hours per week.

That level is particularly significant because the ACA redefined the number of hours that an employee could work before being classified as a full time employee for the purpose of enforcing the law's employer mandate, which requires employers with more than 30 full time equivalent employees to either pay a large tax of $2,000 for each uninsured employee above that number or to provide costly health insurance coverage for all their employees at a cost of 3 to 7 times the amount of the tax per uninsured employee.

Consequently, in seeking to avoid having such dramatically higher expenses or taxes imposed upon them, U.S. employers began significantly reducing the number of these near full time workers from their payrolls almost immediately after the passage of the law.

But the way that the Affordable Care Act's employer mandate would be implemented carried another catch for employers, which ensured that additional job losses would occur for Americans working in near full time jobs in the months ahead of key dates specified in the law. Business owner and blogger Warren Meyer explains:

The more important date, though, is January 1, 2013. This is a date that every business owner was paying attention to at the time but which seems entirely lost on the media. All the media was focused on the start-date of the employer mandate on January 1, 2014. Why was the earlier date important? Let's go back in time.

At that time, the employer mandate had yet to be delayed. The PPACA and IRS rules in place at the time called for a look-back period in 2013 where actual hours worked for each employee would be tracked to determine whether the employee would classified as full or part-time on the Jan 1, 2014 start date. So, if a company wanted to classify an employee as part-time at the start of the employer mandate (and thus avoid penalties for that employee), that employee needed to be converted to part-time as early as possible, preferably before 2013 even started and at worst by mid-year 2013 [sorry, I typo-ed these dates originally].

Unlike the government, which apparently waits until after the start-up date to begin building large pieces of major computer systems, businesses often tackle problems head on and well in advance. Faced with the need to have employees be working 29 hours or less a week in the 2013 look-back period, many likely started making changes back in 2012. Our company, for example, shifted everyone we could to part time in the fourth quarter of 2012. I know from talking to the owners of several restaurant chains that they were making their changes even earlier in 2012. One employee of mine went to Hawaii in October of 2012 and said that all the talk among the resort employees was how they were getting cut to part-time over Obamacare.

Yes, the employer mandate was eventually delayed, but by the time the delay was announced, every reasonably forward-looking company that was going to make changes had already done so. Having made the changes, there is no way they were going to switch back, and then back yet again when the Administration finally stumbles onto an actual implementation date.

If this chart gets any traction over the next few days, expect to see a lot of ignorance as PPACA defenders claim that the fall in low-wage work hours can't possibly have anything to do with the PPACA because the employer mandate has not even started. Now you know why this argument is wrong. The PPACA, and associated IRS implementation rules, drove companies to convert full-time to part-time jobs as early as 2012.

And that's why we see the number of Americans employed on a near full time basis drop in steps in the months ahead of the key Obamacare employer mandate implementation dates of January 1, 2013 and January 1, 2014.

Altogether, we observe that as many as 1,151,000 near full time jobs have been lost from the U.S. economy as a direct result of the passage of the Patient Protection and Affordable Care Act since the time of its passage through August 2014. Moreover, because this reduction in employment is the result of legislation that applies across the entire nation, we must consider this change to be a contributor to structural unemployment for the U.S. economy.

No wonder Obamacare's employer mandate is so increasingly unpopular!