For the second month in a row, our alternative measure of the relative health of China's economy indicates that nation is potentially in recession.

Our alternative measure is based trade data collected by the U.S. Census Bureau, which is considerably more reliable than the GDP growth rate or other trade statistics reported by China's government. Here, we simply calculate the year-over-year growth rate of the value of goods that China imports from the United States in terms of China's currency, the yuan (or renminbi).

Doing that exercise for the trade data for October 2014, which was just reported on 5 December 2014, we find that the year over year growth rate for the value of the goods that China imported from the U.S. was negative for the second month in a row. That negative indication in consistent with near-zero growth in China's economy (at best) or mild economic contraction. 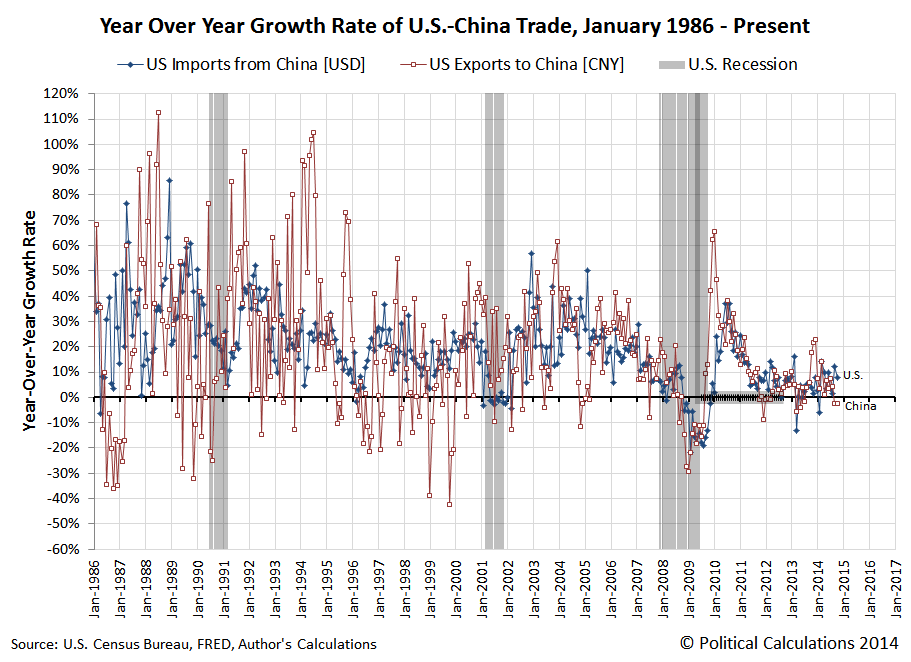 By contrast, the value of goods exported from China to the U.S. suggests that the U.S. economy continued to expand in October 2014.

Our next chart puts the year over year growth rate of the value of China's imports from the U.S. into better context. 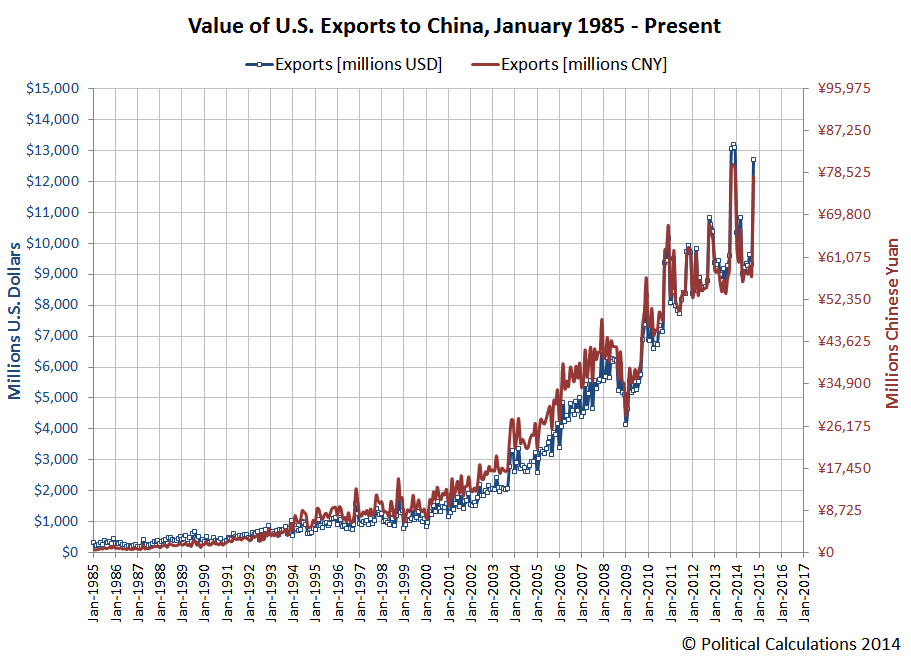 In October 2013, the value of U.S. exports to China reached record levels thanks to a massive increase in the amount of oil seeds and oleagenous fruits purchased by Chinese entities following record U.S. harvests, which predominantly consists of soybeans. Of the $4.112 billion dollars worth of these products that were shipped from the U.S. to other nations, Chinese entities purchased about 72% of the total. At an estimated price of at least $13 per bushel in October 2013, China acquired the equivalent of as many as 227 million bushels of soybeans.

A year later, we find that of the total value of $4.102 billion of U.S. soybeans exported around the world, Chinese entities acquired some 75% of the total. At an estimated price of $10 per bushel for the month, the equivalent of 308 million bushels of soybeans has been imported by China from the U.S. in October 2014. Soybeans account for approximately one-quarter of the value of all the goods exported from the U.S. to China during the month.

While the falling prices for soybeans is to be positive factor, allowing the China's soybean consumers to purchase higher quantities than ever before, it does add to the risk of further unleashing deflationary forces in China's economy, which is where the growing recession risk for the nation lies.

That's one reason why tracking the year-over-year growth rate of the value of goods imported by a nation is such an effective indicator of a nation's relative economic health - it is capable of exposing this kind of economic dynamic.