As expected, China's economy rebounded a bit in December 2014. However, the size the rebound indicates that the nation's economic distress is continuing.

Our chart below, showing our alternate economic health indicator of the year-over-year change in the rate of growth of the exchange rate-adjusted value of goods exported between the U.S. and China, reveals that while the U.S. economy likely experienced positive growth in December 2014, China's economy remained in negative growth territory. 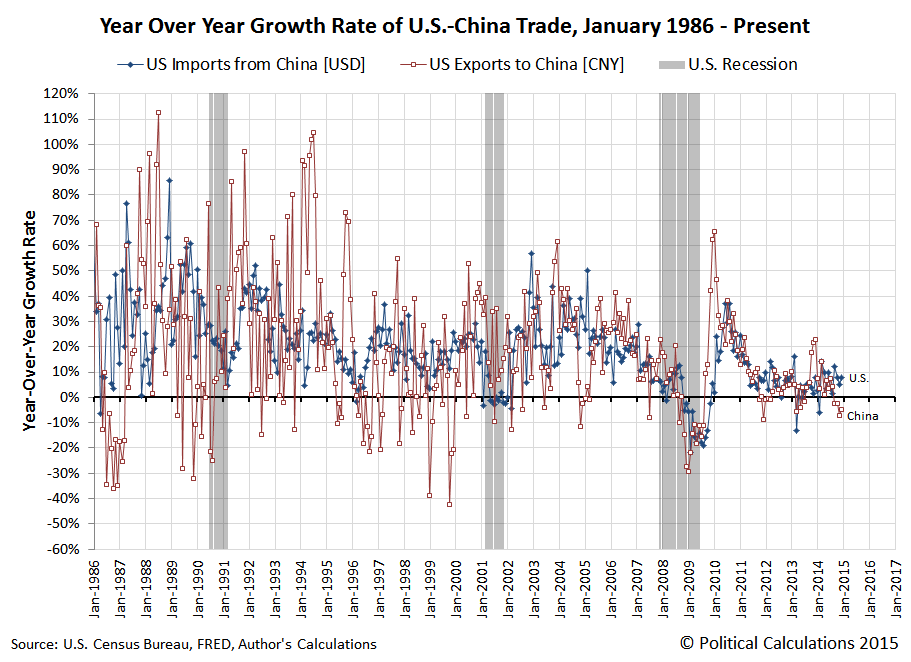 Official trade data reported by China, which given its historical unreliability, which even the nation's leaders believe should only be used to get a sense of the overall direction of the China's economy, suggests that January 2015 saw China's economic situation deteriorate:

Largely as a result of the sharply lower imports - particularly of coal, oil and commodities - China posted a record monthly trade surplus of $60 billion.

However, the quality of China's official data is once again in question. Reuters' article highlighted one of the problems with relying upon it for an accurate assessment of the state of China's economy:

During 2014, China's total trade value increased by 3.4 percent from a year earlier, short of the official target of 7.5 percent, and some analysts have raised questions about whether export data was inflated by fake invoicing as firms speculated in the currency and commodities markets.

We developed our alternative economic health indicator using trade data collected by the U.S. Census Bureau related to the value and volume of goods exported from China to the U.S. or imported into China from the U.S., which gets around the limitations of China's official trade data. We'll have numbers to assess January 2015 in March when they're released by the U.S. Census Bureau.

Update 7:06 AM EST: Tim Worstall has really bad news on what the Chinese government's official economic statistics are saying.