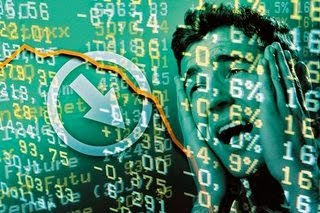 We've been working behind the scenes here at Political Calculations on how to visually describe the near-real time health of the private sector of the U.S. economy using what is perhaps its simplest and most powerful indicator: the number of U.S. companies acting to cut their dividends.

Here, we've previously identified that the U.S. economy may be considered to be comparatively healthy when no more than 10 companies take the step of cutting their cash dividend payments to their shareholding investors in a single month. If more than 10 companies take that action during a single month, those collective actions are sufficient to indicate that a significant portion of the private sector of the U.S. economy is experiencing recessionary conditions, where the nation's GDP growth rate may be described as sluggish.

More recently, we've determined whenever the number of companies acting to cut their dividends in a single month rises above the 20-25 per month mark, it is likely that a significant portion of the U.S. economy is in outright contraction, where it is possible that the U.S. economy as a whole may be also be experiencing negative growth. We list the threshold for economic contraction as a range because we don't have enough data as yet to refine where the threshold really falls.

Previously, we've had to wait until the end of a calendar month to get the data for the number of companies that cut their dividends during the month. But we now have data sources that report that kind of information on a daily basis:

We've found that these two sources capture a large percentage of all the dividend declarations each month, with a relatively low level of "false positive" errors in their reporting. In particular, these kinds of errors are something we've seen with the WSJ's Dividend Declarations report, which because it's an automated reporting system, will occasionally trip up when dealing with unusual situations, such as special one-time dividend payments following a merger (see the atypically good comments at Seeking Alpha here for more discussion of a recent example).

Meanwhile, because we're still working out where the threshold between economic expansion and contraction exists where the number of companies acting to cut their dividends is concerned, we want to be able to match that daily dividend reporting up against an entire quarter, which should give us a sense of how the GDP growth rate for a quarter will be reported.

So what we've done is to develop a chart that tracks the cumulative number of dividend cuts announced each day throughout an entire quarter, identifying the various thresholds that correspond to a relatively healthy expansion (green), distressed conditions (yellow) or a relatively unhealthy economic contraction (orange-to-red). Our results comparing the number of dividend cuts in the first quarter of 2015 (2015-Q1) and the second quarter to date (2015-Q2) are presented below: 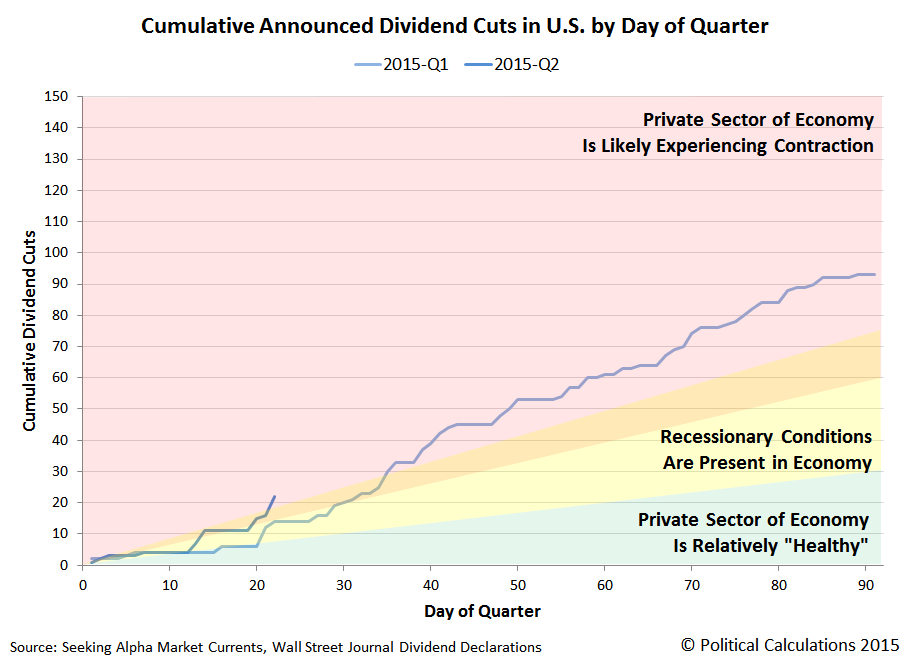 At this point of the second quarter of 2015, it is clear that the U.S. economy is experiencing a higher level of distress than at the same point of time during the first quarter. We see that the number of dividend cuts announced through 21 April 2015 is already sufficient to classify the U.S. economy as experiencing contractionary conditions in this first month of 2015-Q2.

We also see that overall, the first three months of 2015 fell well into the contractionary zone, suggesting that the U.S. economy shrank in 2015-Q1. We'll find out if that was indeed the case by the end of June 2015, after the U.S. Bureau of Economic Analysis releases its third estimate of GDP for 2015-Q1. The BEA will release its first estimate of GDP for 2015-Q1 on Wednesday, 29 April 2015 and will revise it in each of the two following months (their release schedule is available here). And perhaps one more time when they perform their annual larger scale revisions spanning multiple quarters over multiple years in July.

We'll periodically update this chart while the number of dividend payments being cut remains at elevated levels.