Political Calculations
Unexpectedly Intriguing!
25 June 2015
How Many Calories Are You Burning While Running or Walking? 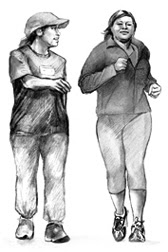 That rule of thumb is something you'll often see if you monitor your estimated calories burned on a modern treadmill, which for every mile you walk or run on it, will often indicate that you've burned about 100 calories.

It turns out though that the amount of calories burned by running or walking over a given distance are different, as Amby Burfoot of Runner's World explains after investigating a contrary claim by David Swain, an exercise physiologist at Old Dominion University:

In "Energy Expenditure of Walking and Running," published last December in Medicine & Science in Sports & Exercise, a group of Syracuse University researchers measured the actual calorie burn of 12 men and 12 women while running and walking 1,600 meters (roughly a mile) on a treadmill. Result: The men burned an average of 124 calories while running, and just 88 while walking; the women burned 105 and 74. (The men burned more than the women because they weighed more.)

Swain was right! The investigators at Syracuse didn't explain why their results differed from a simplistic interpretation of Newton's Laws of Motion, but I figured it out with help from Swain and Ray Moss, Ph.D., of Furman University. Running and walking aren't as comparable as I had imagined. When you walk, you keep your legs mostly straight, and your center of gravity rides along fairly smoothly on top of your legs. In running, we actually jump from one foot to the other. Each jump raises our center of gravity when we take off, and lowers it when we land, since we bend the knee to absorb the shock. This continual rise and fall of our weight requires a tremendous amount of Newtonian force (fighting gravity) on both takeoff and landing.

Burfoot went on to provide the math formulas that would provide a better estimate of actual calories burned per mile by either running or walking, which we've adapted into the following tool. All you need to do is to enter your weight, whether you're running or walking and also the distance you're covering, and we'll do the rest!

In terms of calories burned, the net calories burned figures are the important results in the tool, since those results account for your basal metabolism, or rather, how many calories you would have burned anyway over the elapsed time of the activity if you hadn't been either running or walking.