Political Calculations
Unexpectedly Intriguing!
08 June 2015
Other Than That, Nothing Much of Note with the S&P 500

Other than investors completing their shift in focus to 2015-Q4 in setting today's stock prices, nothing much of note happened in the U.S. stock market last week. 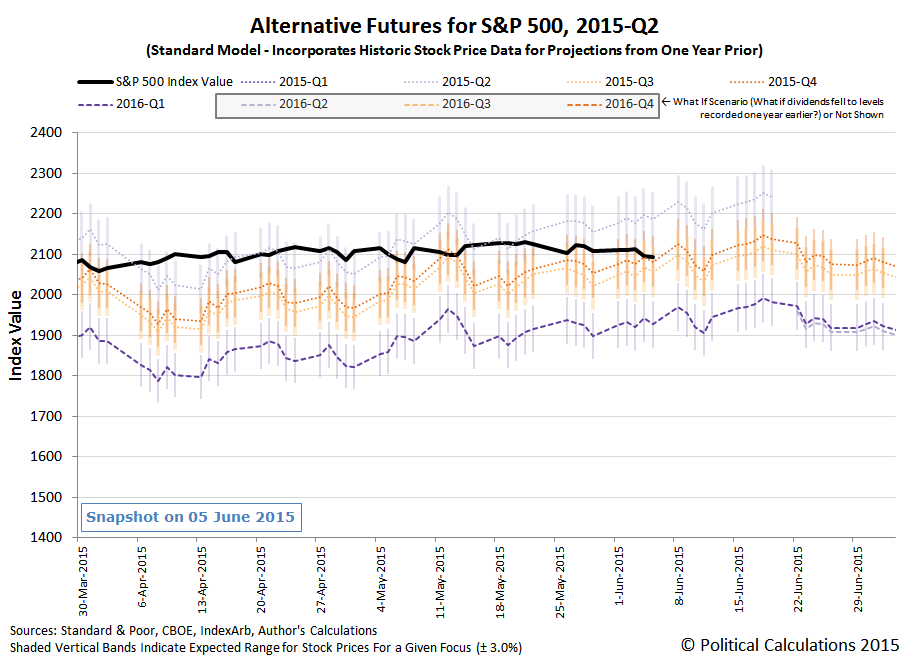 That shift in focus, which began after Wednesday, 20 May 2015, was basically completed on Thursday, 4 June 2015, coinciding with strong jobs data in the U.S., as the number of seasonally-adjusted new jobless claims remained low and ADP's payroll estimate for May 2015 came in higher than expected, indicating strong job growth at small firms in the U.S.

That increase coincides with the stabilization of crude oil prices in the U.S. in May 2015 after having bottomed on 16 March 2015 before rebounding to a range of $58 to $62 per barrel in April 2015. Since Americans between the ages of 20 and 24 are often disproportionately marginal employees in industries whose revenues are highly sensitive to fuel prices and their impact upon the disposable income of Americans, such as accommodation and food services, the stabilization of fuel prices in May 2015 helps explain why the Age 20-24 group saw such gains compared to other age groups in the household employment survey for the month.

The jobs data is also particularly significant in that it is affects the U.S. stock market in two ways. First, it directly affects the exchange rate between the U.S. dollar and foreign currencies, with the U.S.' relatively stronger jobs performance than elsewhere in the world leading the U.S. dollar to become relatively stronger with respect to other currencies. That situation actually weighs against U.S. stocks, since it often negatively impacts the foreign earnings of large U.S. multinationals and also firms that export goods to foreign markets.

But the biggest elephant in the room, so to speak, is the indication that a strongly performing domestic jobs market has upon the expectations for the Federal Reserve's monetary policy. Here, a U.S. economy that appears to be performing strongly increases the expectation that the Federal Reserve will hike short term interest rates sooner rather than later. The jobs data from the first week of June 2015 would appear to be prompting investors to expect that the Fed will act to begin hiking short term interest rates in the fourth quarter of 2015.

Having been focused on that future quarter, investors are now setting stock prices in accordance with the expectations they have for the change in the year-over-year growth rate of dividends in the fourth quarter of 2015, the math for which we derived back in 2009. As transitions in the forward-looking focus of investors go, it is as perhaps as ideal as could have been hoped for. As for what it means for stock prices through the rest of the month, absent a noise event or other shift in the forward-looking focus of investors to a different point of time in the future, see the chart above.