First, here is Rojstaczer and Healy's data from 2012 showing how the percentage of letter grades awarded at over 200 U.S. colleges and universities has evolved from 1960 through 2008: 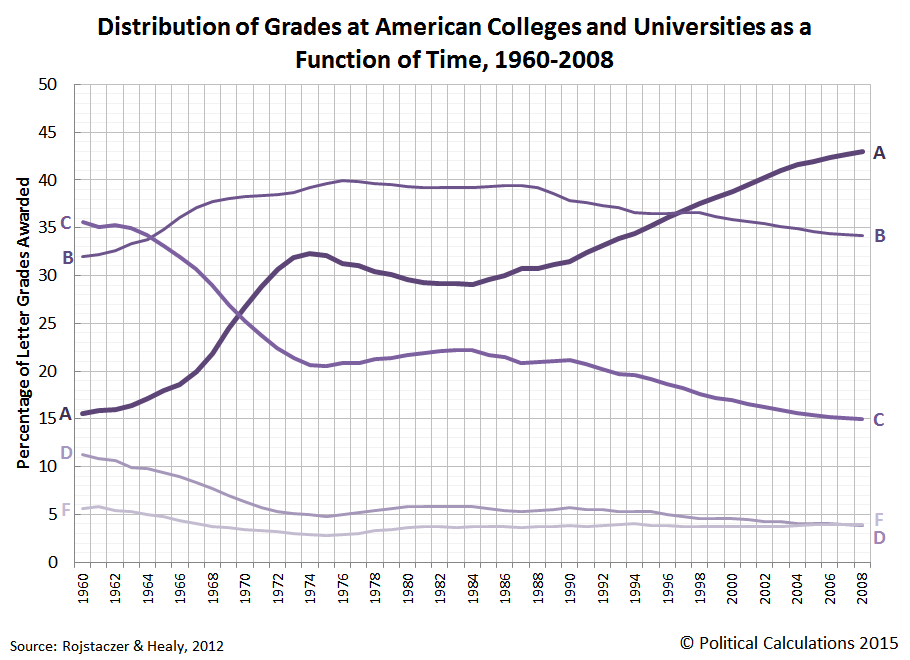 Next, just for fun, we've taken the first three paragraphs of Chapter 3 in CNBC's "Boom, Bust & Blame: The Inside Story of America's Economic Crisis" and have rewritten them to apply to the U.S.' higher education bubble. Enjoy!

As home values the value of a college education rose and home ownership the number of Americans with college degrees increased, some Americans were left out. But not for long. Before the boom, they didn't make enough money have enough education or their credit score college entrance exam score wasn't high enough to get a mortgage into college. They didn't qualify. Lenders College administrators wouldn't loan grant these potential borrowers money students admission because their risk of defaulting failing was too high, by most standards. When those standards started to change, an industry near extinction was reborn.

For years, borrowers students needed the Three C's R's in order to get a mortgage college degree: Credit, Collateral, and Character Reading, Writing, and Arithmetic. It was accepted practice in the mortgage higher education industry. Customers Students would have to document their income, their debts, and their credit history aptitude, their admission test scores and their academic history. Mortgage underwriters College admissions officers conducted exhaustive research on potential borrowers' finances students' abilities.

In a quest to cash-in on the housing higher education boom, many banks and non-bank lenders colleges and universities relaxed their long-standing rules. They lowered the standards borrowers students needed to meet. They targeted potential customers students who previously were unable to get mortgages gain admittance.

That we can simply change a handful of words in CNBC's story to make it apply to an entirely different sector in the U.S. economy is an indication of how closely the parallels run between the higher education bubble in the U.S. and what happened within the U.S. mortgage lending industry during the housing bubble, where they are still in the process of paying legal settlements as their executives seek to avoid criminal prosecution related to the unethical business practices that were widely adopted within the industry during the latter portion of housing bubble.

If this were a detective story, we would be looking to establish that the alleged perpetrators had the means, motive and opportunity to commit a crime. Our editing exercise above is really a short summary of what would be the primary motive that U.S. higher institutions have had for committing the crime of fraud, in that they are misrepresenting the grades being awarded today as being comparable in requiring the same level of academic performance on the part of the students as what was required to earn such high letter grades in the past. FindLaw generically describes fraud as follows:

Fraud is a broad term that refers to a variety of offenses involving dishonesty or "fraudulent acts". In essence, fraud is the intentional deception of a person or entity by another made for monetary or personal gain.

Fraud offenses always include some sort of false statement, misrepresentation, or deceitful conduct. The main purpose of fraud is to gain something of value (usually money or property) by misleading or deceiving someone into thinking something which the fraud perpetrator knows to be false. While not every instance of dishonesty is fraud, knowing the warning signs may help stop someone from gaining any unfair advantage over your personal, financial, or business affairs.

We'll be exploring this concept quite a bit as it would apply to higher education in the United States later this year, but for now, consider the evolution of how the letter grade of A has replaced the letter grade of C as the most commonly awarded grade in the U.S. in the years since 1960 as indirect evidence of a growing level of academic fraud over time.