When did the earliest advertisement for Campbell's brand new line of condensed soups appear in a local U.S. newspaper?

Previously, we identified what we believe to be is the first newspaper advertisement ever for Campbell's Condensed Soup, but there's some uncertaintly with that ad because the maker of the "new concentrated soup" wasn't identified in the retailer's 12 January 1898 notice that it would be demonstrating the product.

And because of that uncertainty, we wondered when the first ad that ever specifically identified Campbell's condensed soups appeared in an American newspaper. After doing some digging, we have a pretty good candidate for an advertisement that local grocer J.H. Banman in Alton, Illinois placed in the Alton Evening Telegraph on 28 June 1898.

Speaking of firsts, we think we've identified the earliest local grocer ad featuring a discounted sale price for Campbell's Condensed Soups as the following one, which appeared for Jones Dry Goods in the Sunday, 14 August 1898 edition of the Kansas City Journal (see the third column, in the section for the sixth floor): 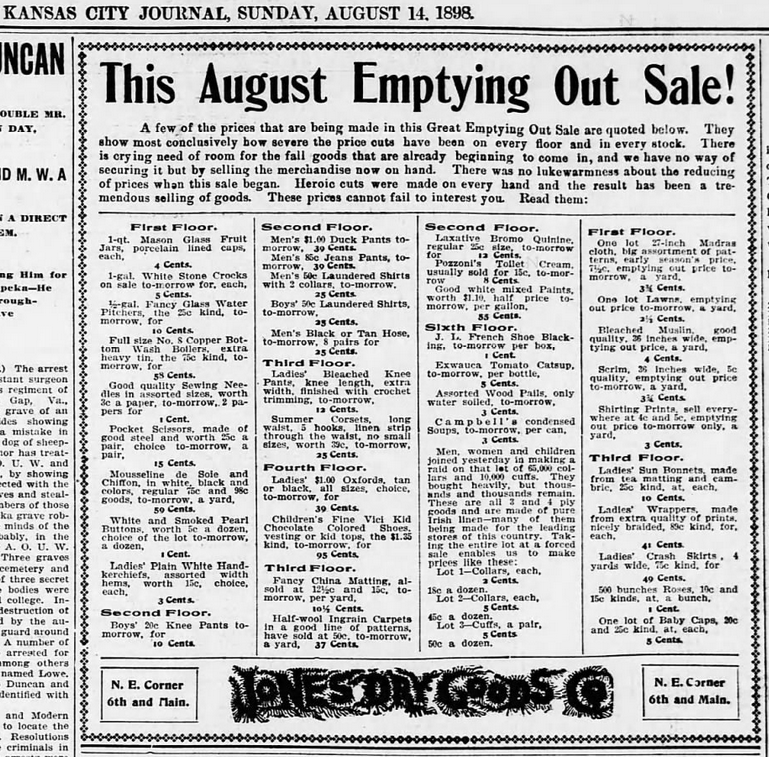 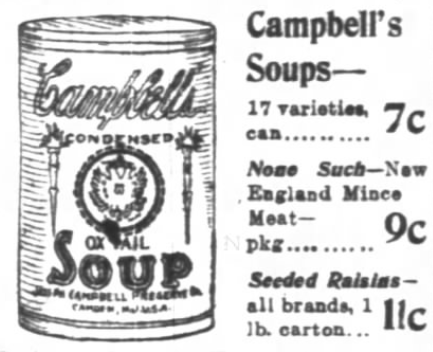 It's interesting to note that in the two years from 1898 to 1900, the number of varieties of Campbell's Condensed Soups expanded from 5 to 17 varieties. As a side note, Campbell's had expanded their production from when they started sometime in 1897 of about 10 cases per week, which would work out to be an annual rate of production of 12,480 cans, up to 400 cases per week in 1900, which works out to be an annual production figure of 500,000 cans.

Since Campbell's Condensed Tomato Soup was already established at this point as its leading product, we were surprised that the first artistic rendering of one of its iconic soup cans would feature its Ox Tail variety, but remember that it's Chicago. They've always been somewhat weird about the food they eat there.

Another interesting bit of trivia is that Campbell's was extremely thrifty with their advertising budget, where it focused its limited advertising dollars putting ads on streetcars, which it began doing in 1899. The company wouldn't pursue direct print advertising venues until 1905, and until that time, it left all of its print advertising in the hands of local grocers throughout the country. Most significantly, through the newspaper ads of the Great Atlantic and Pacific Tea Company, a.k.a "A&P", as the following advertisement announcing that the regional grocer would now be handling Campbell's 10 varieties of its condensed soup products in the 3 September 1899 edition of the Atlanta Constitution: 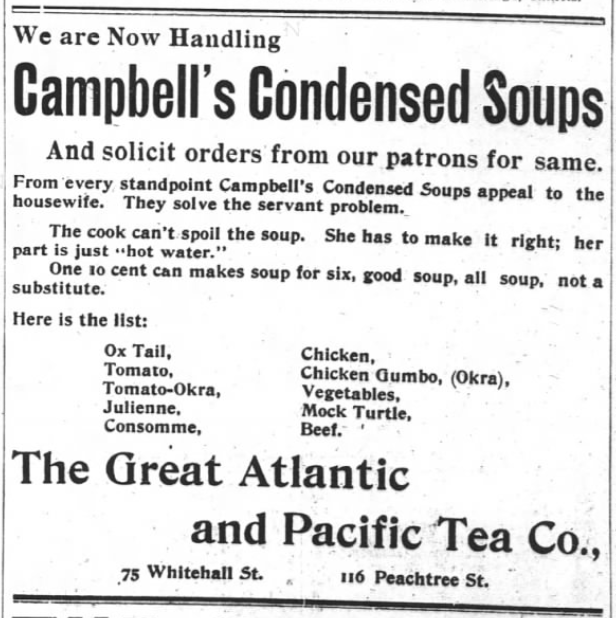 Over a century ago, A&P was something like the Trader Joe's of its day. Last week, the remnants of the grocer filed for bankruptcy for the second time in the last five years, which will likely mark the end of the story of that company in the annals of U.S. commerce.