Since 4 August 2011, the U.S. stock market, as measured by the value of the S&P 500 index versus its trailing year dividends per share, has been in a stable, upward trend. On 8 July 2015 though, that trend came within 12 points coming to a sudden end after enduring for nearly four years. 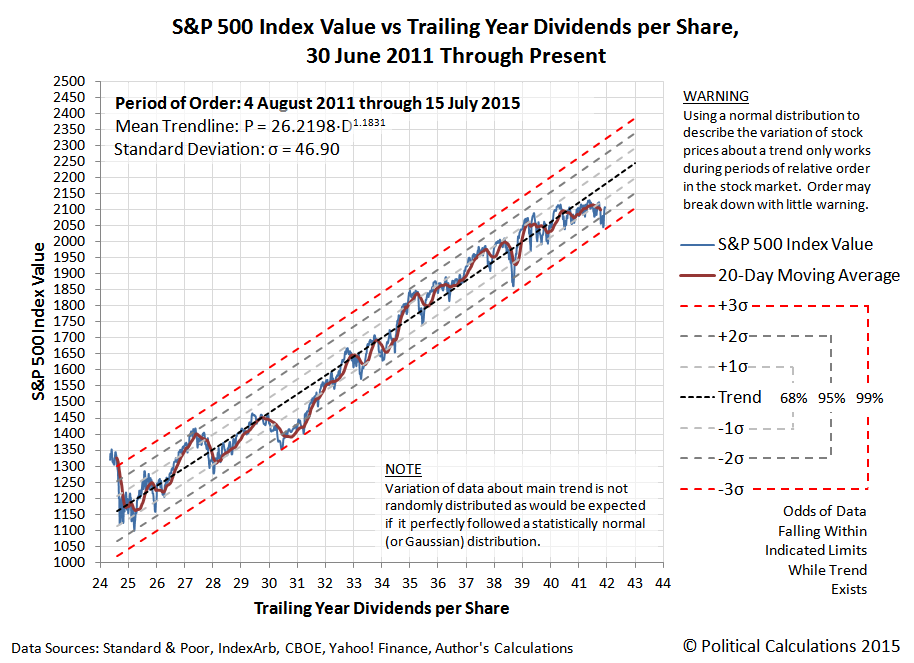 Some quick notes. First, this isn't technical analysis, and although it sort of looks like it, it shouldn't be confused with that nearly useless form of tasseography. It's really statistics, and more specifically, what we've presented in the chart above is really a visualization of a statistical hypothesis test.

Second, we're making a pretty important assumption that the trajectory of stock prices with respect to their underlying dividends per share follows a power law relationship during relative periods of order in the stock market, where order can be said to exist when the variation in stock prices with respect to its central trend trajectory can be described by a normal (or Gaussian) distribution.

Or more accurately, when the hypothesis that such a normal distribution might apply under a particular set of circumstances or a limited period of time cannot be rejected.

In reality, stock prices do not closely follow a true normal distribution, as they're not really random. And of course, order in the stock market can break down suddenly, as the leftmost portion of the data shown on our chart partially illustrates for the period between 30 June 2011 and 4 August 2011, as stock prices broke their previous trend and went into a Lévy flight as they dropped a couple hundred points as dividends continued to rise before stabilizing onto their current long-term trend.

At their current level, it wouldn't take much for the current period of order in the U.S. stock market to break down. All stock prices would need to do is to either dip below the lower dashed red curve shown in our chart above, or alternatively, simply continue to drift sideways to slightly higher as they have since the beginning of 2015.