Can you imagine a world where nobody knew what condensed soup was or how to prepare a meal with it?

That's the problem that Campbell's John T. Dorrance faced after developing the commercial process that would extract water from soup while preserving much of its flavor in 1897. How Dorrance overcame that particular problem was discussed in a 2006 PhD dissertation:

In addition to introducing this new product to consumers, especially housewives, Dorrance needed to persuade them to actually try the product. He was aware that condensed soup packaged in small tin cans might draw interest from the shopping crowds, but to create a real market for the product, they must be convinced of its efficacy. Collins quotes a familiar industry saying: "People aren't interested in the tin can, they're interested in what's inside."102

While housewives might marvel at the technology that could turn a small tin can of soup into a meal for an entire family, Dorrance knew they would only buy if it was good tasting.103 He needed to convince them that the canned varieties should not be perceived as a replacement for traditional homemade soups, but instead they should be added to housewives' repertoire of food preparation. And equally important, condensed soups may taste different than homemade soups, but they were still high quality nutrition. Once effectively convinced, then Dorrance knew that housewives would find a way to persuade their husbands that condensed soup was good soup.

To help convince the public that his culinary creations were not only inexpensive but also good quality, Dorrance himself arrived at grocery stores in Boston, setting up displays in grocers' windows and offering samples of his original five varieties of soup.104 The public reaction was initially one of curiosity, but the demonstrations became an almost instant success. As a result, Dorrance hired other food demonstrators to offer on-the-spot taste tests in various grocery stores and to show that his products were easy-to-prepare, time-saving alternatives to labor-intensive, expensive homemade soups. Above all, he wanted people to see for themselves that his condensed soups tasted good. The five original varieties--Tomato, Consommé, Vegetable, Chicken, and Oxtail--were chosen carefully and were specifically devised to meet the needs of busy homemakers. According to Collins, the five original soup flavors represented a "nice blend of sophistication and solid value" that Fannie Merritt Farmer (1857-1915), the famous turn-of-the-century cookbook author and culinary expert described as "combining 'English thoroughness and French art.' They were not exotic or unusual, but neither were they something the average housewife could or would whip up just before dinner."105

In our project researching the entire sale price history of Campbell's Condensed Tomato Soup, we came across a unique advertisement that we believe is directly related to John Dorrance's early marketing of his condensed soups, where either he or one of the people he specifically hired to demonstrate how to add water and heat to prepare his new condensed soup products for consumption was introduced to Washington D.C. and, more importantly because of its proximity, the key market of Alexandria, Virginia. Here's the ad that appears for Woodward and Lothrop on 12 January 1898 in the Alexadria Gazette, which doesn't identify the manufacturer, but almost certainly is one of the earliest public demonstrations for Campbell's Condensed Soups. 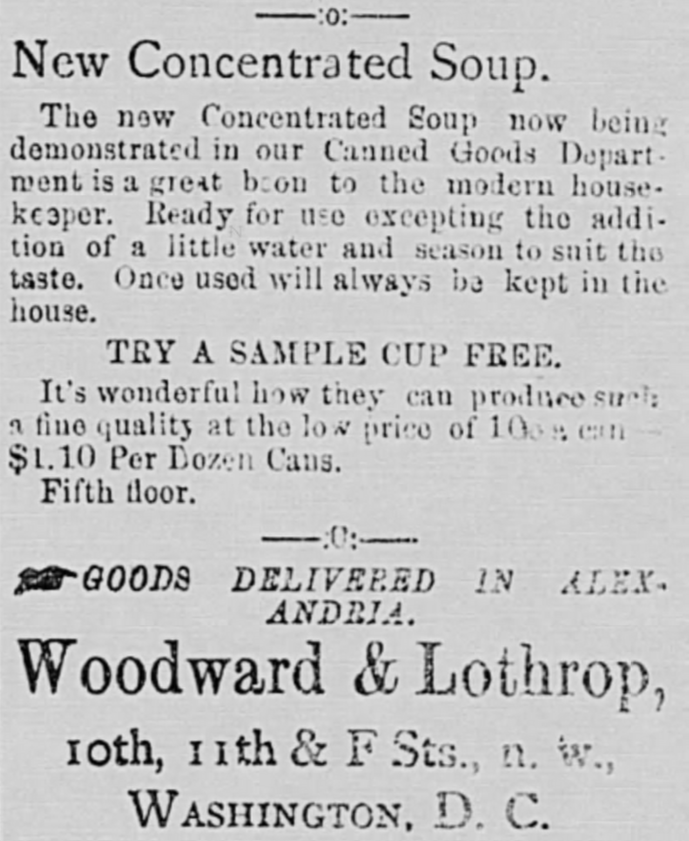 We strongly suspect that Campbell's was the producer of the "concentrated soup" being demonstrated because of the prices indicated in the ad and also because just six months later, Campbell's condensed soups were being advertised by name in the Alexandria Gazette by local grocer J.C. Milburn.

As for why Alexandria, Virginia was such a key market that was so critical for the early commercial success of Campbell's new condensed soups, that's something we'll explore at a later date.