We learned long ago that trade data published by the Chinese government is almost completely unreliable for anything other than indicating its economy's basic direction.

So we don't rely upon it, as we discovered that the trade data published by the U.S. government about the goods that the U.S. imports from and exports to China is considerably more reliable. Given the volume of trade between the two nations, that data makes for a more accurate indicator of the relative health of China's economy than using China's own trade statistics.

For example, let's consider what China reported about both its exports and imports for the month of June 2015:

On Monday, the General Administration of Customs said Chinese exports grew 2.8 percent last month from a year ago, beating forecasts for a 0.2 percent decline.

Imports fell for an eighth consecutive month, on a yearly basis, but the 6.1 percent drop was the smallest this year, and much better than the 15.0 decline expected by economists.

Some analysts warned that the pick-up in China's trade in June may not last.

"Even though inventories at domestic companies stayed at a relatively low level in May and June, the economic fundamental is weak," said Nie Wen, an analyst at Hwabao Trust. "I doubt imports would continue to improve in the next few months."

The following chart shows what we measured as the year over year growth rate of the value of goods and services traded between the U.S. and China, after accounting for the exchange rate between the U.S. dollar and China's yuan. 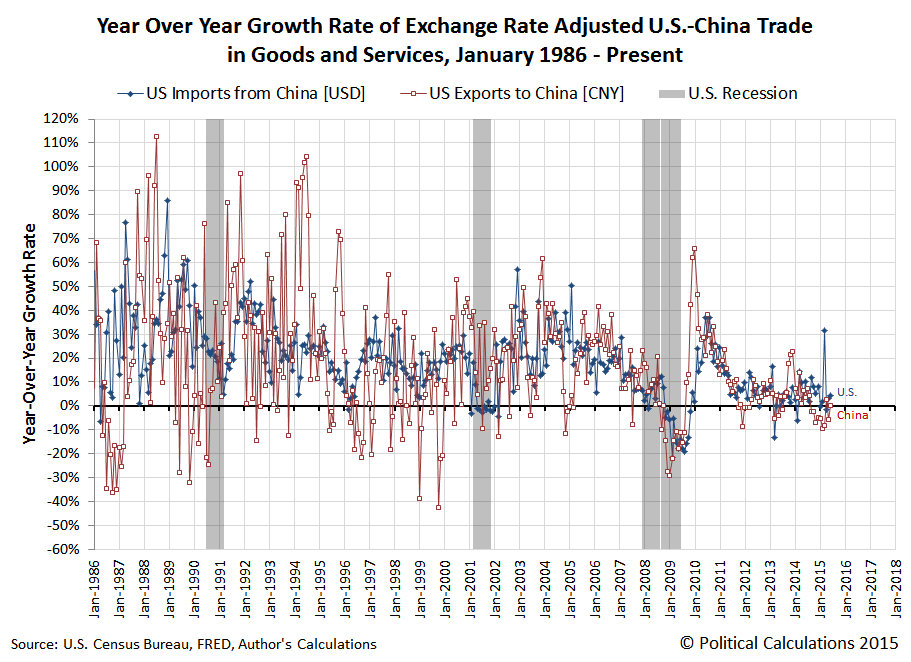 What we see is that the year over year change in the value of what China exported to the U.S. grew by 4.4%, while the value of it imported from the U.S. rose to a growth rate of 0% from a year earlier. Digging into the detailed trade data for June 2015, we find that most of the unexpected increase in China's imports is attributed to the delivery of more commercial aircraft exported from the U.S. to Chinese airlines than in previous months.

Still, at 0% year over year growth in the value of goods it imports from the U.S, it's clear that China's export-dominated economy is continuing to sputter - especially if its own trade data were correct, because that would mean that the amount of trade between it and other regions of the world had to otherwise plummet during the month for those figures to be valid. Our pie chart below shows how China's export markets is dividend among the world's major economic regions: 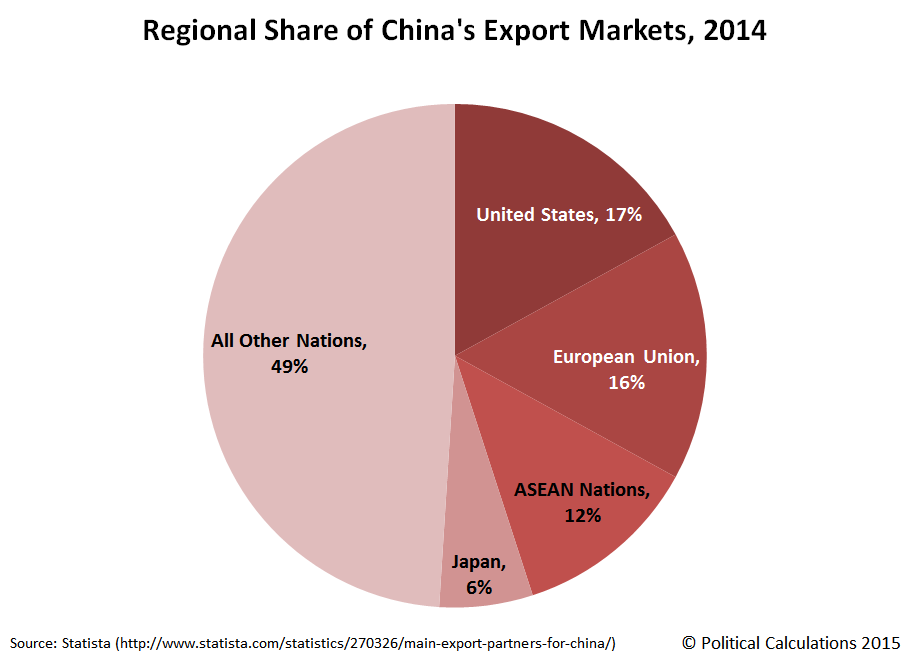 Speaking of sputtering, since China reports its trade data one month ahead of when the U.S. does, let's get a glimpse of what direction the U.S. data will likely turn when the U.S. Census Bureau provides its report for July 2015:

China’s economy started the second half of the year on a weak note, posting disappointing trade and factory-price data in July amid pressure from slack demand at home and abroad.

Exports in July slid 8.3% from a year earlier, reversing a gain of 2.8% in June, customs data released Saturday showed. Imports fell for the ninth month in a row, dropping 8.1%, after a decline of 6.1% in June. And on Sunday, the government announced factory prices in July extended more than three years of declines, with the producer-price index taking its biggest year-over-year tumble in nearly six years.

While there were bright spots in the trade picture, as imports of some key commodities made gains in volume terms, the figures were generally worse than expected and pointed to problems ahead on the already struggling export side.

“We could see relatively strong downward pressure on exports in the third quarter,” Customs said in a statement accompanying the trade data.

With numbers like those coming after what had to be abysmal trade numbers in June 2015 in its other export markets, we can better understand why China adopted such an extreme intervention in the nation's stock markets in July 2015, as not doing so would almost certainly have led to a cascading failure in the nation's economy, which is an inherent danger of all centrally-planned and coordinated endeavors.

Update 9:00 AM EDT: In a "surprise" move, China has unexpectedly devalued its currency.