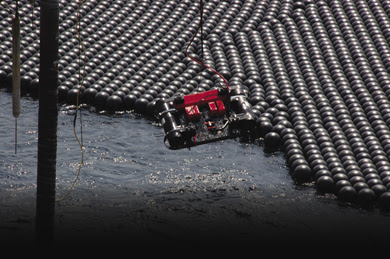 The last time we took on the subject of balls, it was to consider the physics of New England Patriots' quarterback Tom Brady's deflated balls. Today, we're going back to the ball pit because Los Angeles' city government is spending $34.5 million to dump up to 96 million plastic balls into a water reservoir, where the apple-sized floating black spheres are intended to reduce water loss due to evaporation and to reduce the need to treat the water with chemicals to keep algae and bacteria growth at bay.

While it's an open question as to whether the black balls will be successful at their second mission, as other scientists have hypothesized that they might actually promote bacterial growth instead of hindering it, the balls should be somewhat successful in minimizing the loss of water due to evaporation by preventing direct sunlight from reaching and heating the reservoir's water surface. The question is how much might the balls succeed in reducing that evaporation.

Environmental Economics' Tim Haab worked up the basic math, which we're both immortalizing and extending today in a tool designed to answer not just that question, but also how many balls it would take if the city leaders of Los Angeles chose to substitute balls of other sizes for the apple-sized ones they are using.

In doing so, we're going to make two key assumptions. First, that the surface of the 175 acre Los Angeles Reservoir will be able to accommodate the densest packing of 2D circles in a plane, which means that a maximum of 90.7% of the water's surface will be covered by the spheres, which in turn, will represent the maximum amount by which evaporation losses will be reduced. Second, we'll also assume that the blackened spheres will not rotate to expose any wetted surface to the open air or sunlight, which would increase the evaporation rate.

Got all that? Good! Let's get to the tool.... (If you're accessing this article through a site that republishes our RSS news feed, please click through to our site to access a working version of the tool!)

That said, all the default values that appear in the tool above are those that apply to the Los Angeles Reservoir shade ball project. If you want to redo the math to consider the average annual evaporation rate in your state or to consider a project where the area being covered in balls in measured in square feet rather than acres (like a swimming pool), just enter your square footage figure and type "/43560" (without the quotation marks around it) immediately after it in the "Reservoir Area" data entry field. Doing so will convert your square footage to be in the units of acres that our tool references.

But the real fun is to consider what it would mean to substitute 1.575-inch diameter standard ping pong balls or 32-inch diameter giant rainbow beach balls, since it is California after all. Or more interestingly, the 96-inch diameter balls shown in the video below:

What could possibly go wrong?!