Up until a week ago, if a publicly traded U.S. company was announcing it was cutting its dividends, we would have almost automatically assumed, based on what we've observed since the first quarter of the year, that it was an oil industry-related firm.

But now, we can't automatically make that assumption because for the first time since late 2013 and early 2014, we've seen a significant increase in the number of Real Estate Investment Trusts (REITs) announcing that they will be cutting their dividends.

In fact, of the eight firms we counted as taking such action in the last week (via Seeking Alpha's Market Currents, filtered for dividends, and the WSJ's dividend declarations database, five were REITS.

The reason that's significant is because a number of REITs are especially sensitive to interest rate hikes, with the announced dividend cuts lagging several months behind when interest rates have risen.

In fact, from late 2013 all the way up to November 2014, after which the U.S. oil industry claimed the title of being the most distressed sector of the U.S. economy, and a brief increase at the end of first quarter of 2015, we really haven't seen very many REITs listed among the U.S. firms announcing dividend cuts until the past week.

Here's the short list: Hatteras Financial (NYSE: HTS), Invesco Mortgage Capital (NYSE: IVR), Ellington Residential Mortgage REIT (NYSE: EARN), American Capital Mortgage (NASDAQ: MTGE), and New York Mortgage Trust (NASDAQ: NYMT). Going back to the beginning of the month, we would need to add Capstead Mortgage (NYSE: CMO). The last REIT to declare a dividend cut before that was Western Asset Mortgage Capital (NYSE: WMC) back on 19 June 2015. Going back to the beginning of the first quarter, we find that 18 REITs have announced dividend cuts during the 2015, with both Capstead Mortgage and American Capital Mortgage having done so twice.

We'll conclude this post by updating our real-time chart reporting the relative health of the U.S. economy in 2015 as measured by the cumulative number of U.S. firms announcing that they are cutting their dividends by the day of the quarter. 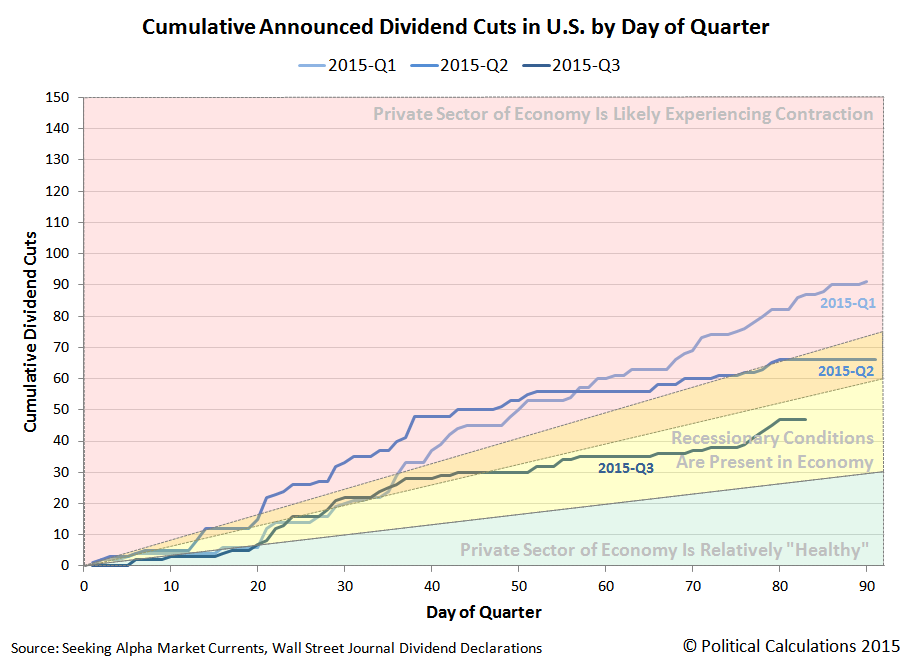 It would appear that after six weeks of relative quiet, recessionary conditions are making their presence within the U.S. economy felt once more.