Believe it or not, there is good news coming out from China regarding the state of its economy. According to trade data collected and reported by the U.S. Census Bureau on the value of goods and services transacted between the two nations, the year-over-year growth rate of China's imports from the United States has increased into positive territory. 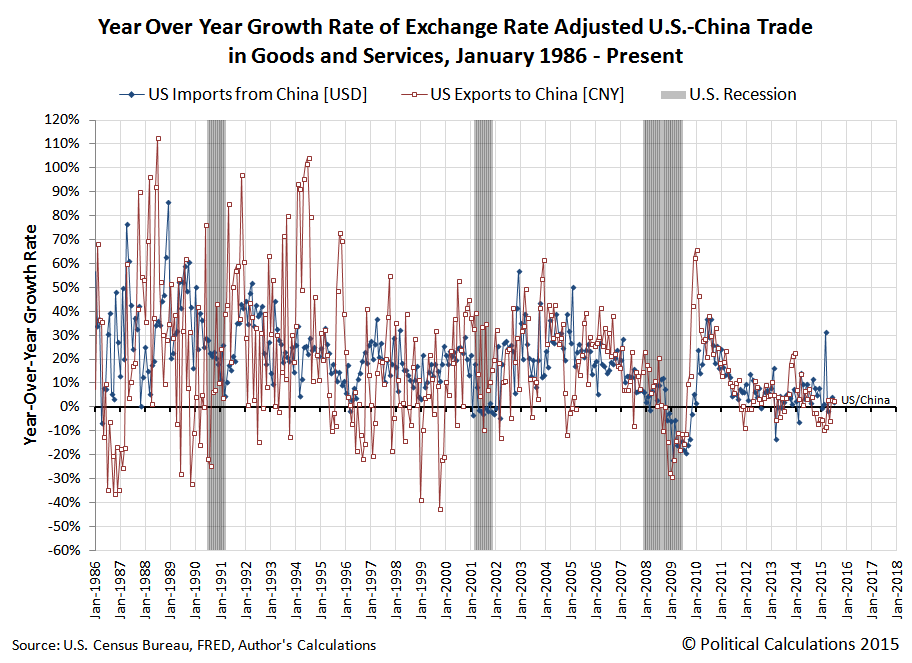 In the chart above, we see that in both June and July 2015, the growth rate of U.S. exports to China has moved up out of the range that is consistent with contractionary forces being at work within China's economy. We should note that June's figure shown in our chart above is a little more positive than we had previously indicated, as we've corrected a data entry error in our records for that month.

Also, when we look at global atmospheric carbon dioxide levels, of which China is the leading producer in the world, we find that the decline in CO2 that began in conjunction with China's Third Plenum leadership meeting, in which the nation's leaders acted to put the brakes on its robust economic growth of previous years in favor of steering the nation's economy to grow more slowly, has largely stalled out. 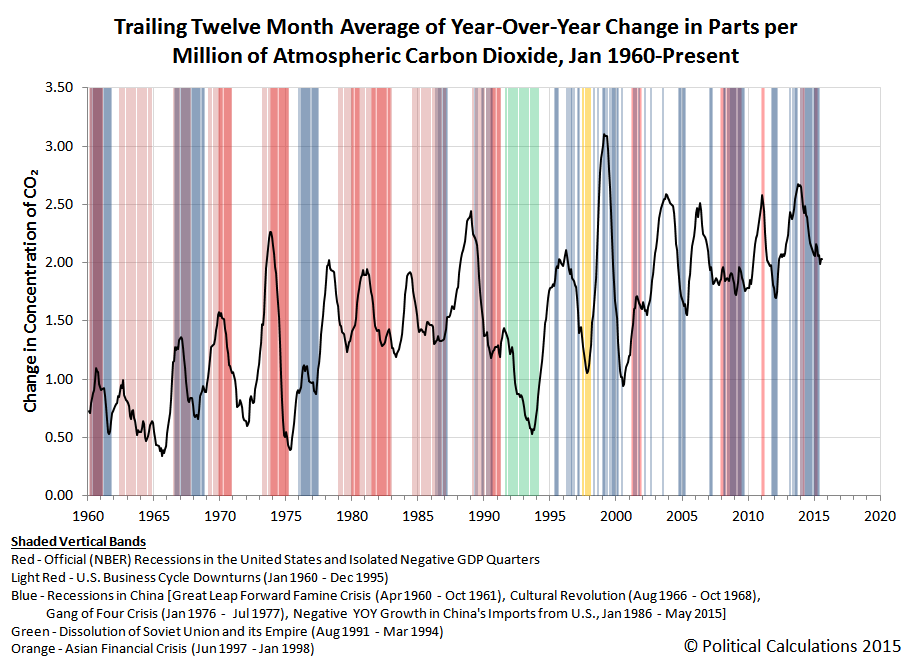 That reversal would confirm that what we see in the trade data is real, as it suggests that China's economic slide may also begun to reverse in the period from June 2015 onward.

Those two consecutive months of positive year-over-year changes came just before the government-run People's Bank of China devalued the nation's currency with respect to the U.S. dollar in early August 2015.

In practice, what that means is that in the near term, it will be relatively more expensive for China to import goods from both the U.S. and also from other regions of the world where the value of its currency declined as a result of the devaluation. At the same time, goods produced in China will be less costly for those in these other regions to acquire, which would give Chinese exporters a relative competitive advantage.

And by relative, we mean about a 2% difference if we look simply at the change in the official exchange rate between the U.S. dollar and the Chinese yuan from July to August 2015.

It will be interesting to see how the trade data evolves in response to the change. Coming at the time it did in August 2015, when nearly every good that will be recorded as having either been exported from either the U.S. to China or from China to the U.S. during the month was already in transit between the two nations, given the typical three-week long trip for cargo ships to cross the Pacific Ocean, we suspect that when the Census Bureau posts its trade data for U.S. exports to China, it will likely be "inflated" by the full 2% of the devaluation - initially making it appear that China's economy grew more robustly in August 2015 than it will really have done.

The early word on China's imports in August 2015 from its official trade statistics, which should really only be considered seriously for providing an indication of the direction of China's economy, is not good:

China’s imports fell more sharply, by 14.3 percent in yuan terms, compared to 8.1 percent in July, with falling commodity prices seen as one factor.

The fall in imports left the country’s overall foreign trade for the month down 9.7 percent from a year earlier, but also meant that China’s trade surplus for the month was markedly up, by 20.1 percent year-on-year, to 368 billion yuan, or about $58 billion, compared to the average of about $43 billion for the first seven months of the year.

Given how GDP is calculated, that surge in China's trade surplus with the rest of the world in August 2015 will likely give China quite a boost for the month and quarter. Funny how China's own reported levels of imports and exports both fell at the same time, suggesting an economy that's undergone contraction.