We're seeing more signs of a reversal in China's recent economic fortunes. First, taking advantage of what may be the most unique alternative economic indicator we've developed to date, we observe that the trailing twelve month average of the year-over-year change in Earth's atmospheric carbon dioxide levels have rebounded off their June 2015 trough. 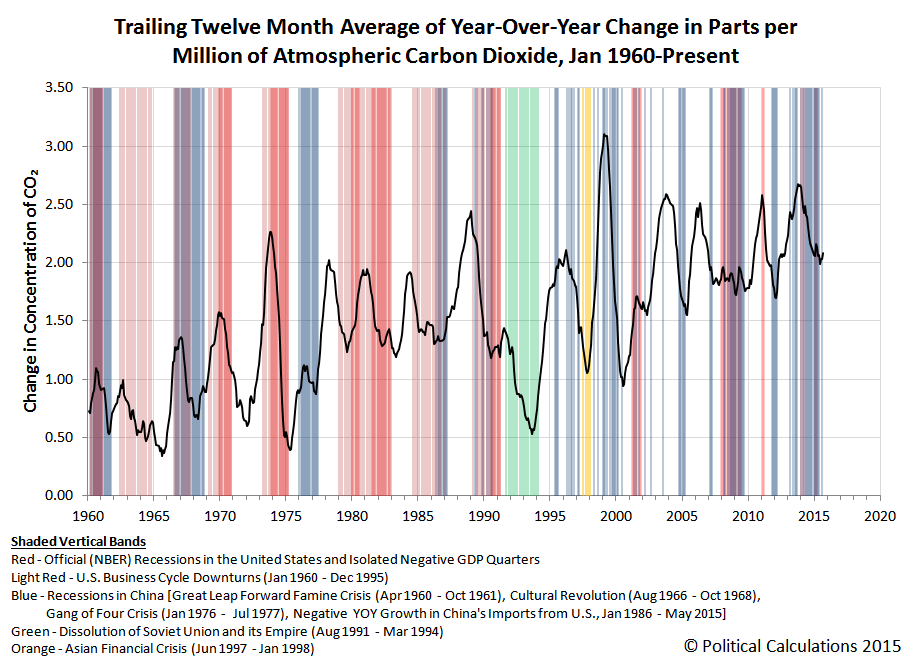 That change is significant because the nation of China is, by a considerable margin, the world largest producer of atmospheric carbon dioxide. The recent cyclical decline in the rate at which global CO2 levels are increasing had coincided with a change in the communist nation's economic strategy, where the nation's leaders had sought to put the nation onto a much slower growth trajectory.

China's leaders were too successful however, as the nation's economic growth stalled out far more rapidly than they had desired, prompting them to initiate new stimulus efforts in an attempt to reignite growth during the second quarter of 2015.

The global CO2 data suggests that those efforts to stimulate the Chinese economy have had some positive effect, as its economy is burning more fuel - an indication of increased activity. [We suppose that some might claim the increase might be purely due to recent explosions and other incidents that have taken place in China recently, however the increase in atmospheric CO2 levels precedes those events, indicating that other factors are responsible for the reversal in direction.]

Meanwhile, our alternative economic indicator of the exchange rate-adjusted, year-over-year growth rate of the value of goods and services traded between the U.S. and China also suggests that China's economy has rebounded off the lows that were recorded in the first quarter of 2015. 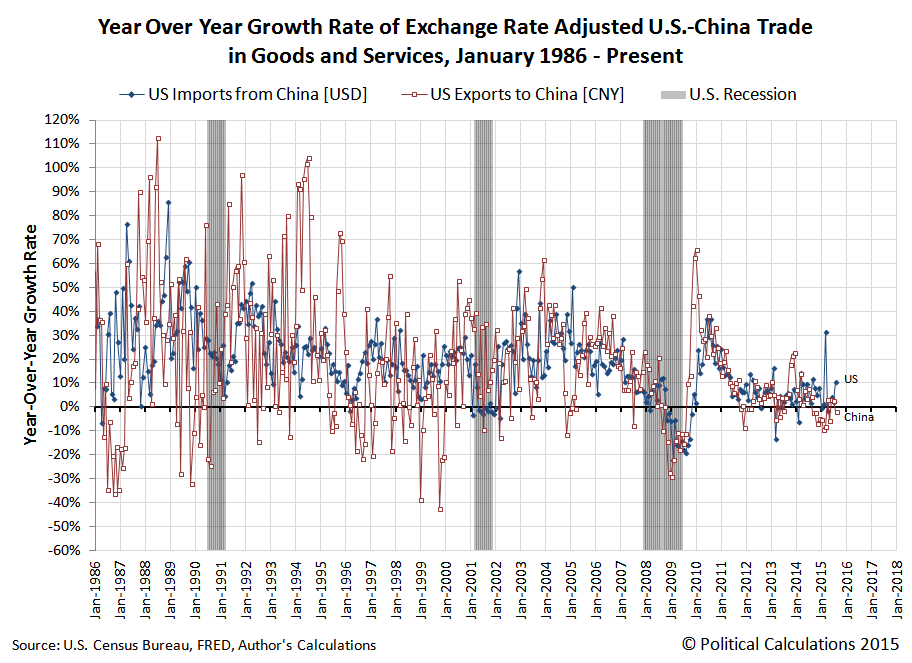 Here we observe that China's exports to the U.S. surged in August 2015, while at the same time, the year-over-year growth rate of China's imports from the U.S. was elevated above its 2015-Q1 lows, which suggests an improving economic situation in China.

The August 2015 data is the first following China's surprise devaluation of its currency on 11 August 2015. Given its timing, the data for August is affected by the change, but the goods and services recorded during the month would already have been in transit between the two nations.

What that means is that while our calculation of the exchange rate adjusted year over year growth rates for August would have been affected, the volume of goods and services would really not have been much impacted. Consequently, the impact of China's currency devaluation won't be fully realized in the U.S. Census Bureau's trade data until the upcoming reports for September and October 2015.

Perhaps the more interesting thing however is that the apparent improvement in the trade numbers between the U.S. and China rather directly contradict the numbers that would have to exist between China and all other nations, if the direction indicated by the official trade data that China has reported for September 2015 is any indication. One possible interpretation of that outcome is that China is loading up on U.S. agricultural products, but is otherwise forgoing importing resources from other nations.

By no means is China's economy out of the woods as yet.