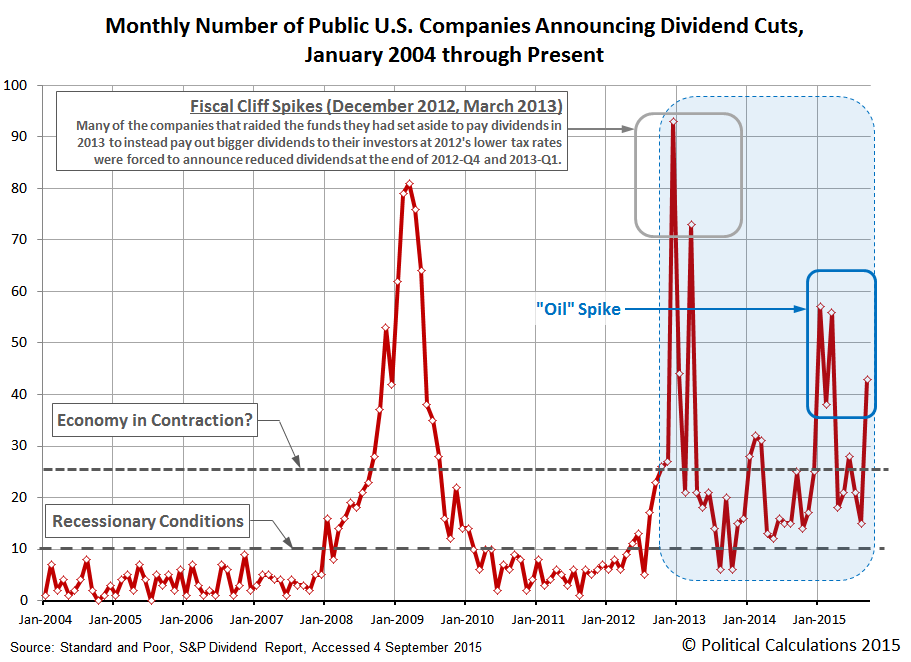 At 43, September 2015's total reported by Standard and Poor is over double what was recorded by our two primary sources for real time dividend cut announcements, Seeking Alpha's Market Currents (filtered for dividends) and the WSJ's Dividend Declarations, which we use to generate our near-real time cumulative dividend cuts by day of quarter chart, which confirms that the U.S. economy took a turn for the worse in September 2015, but for the third quarter of 2015 overall, only indicates that the U.S. economy experienced recessionary, rather than contractionary, conditions. 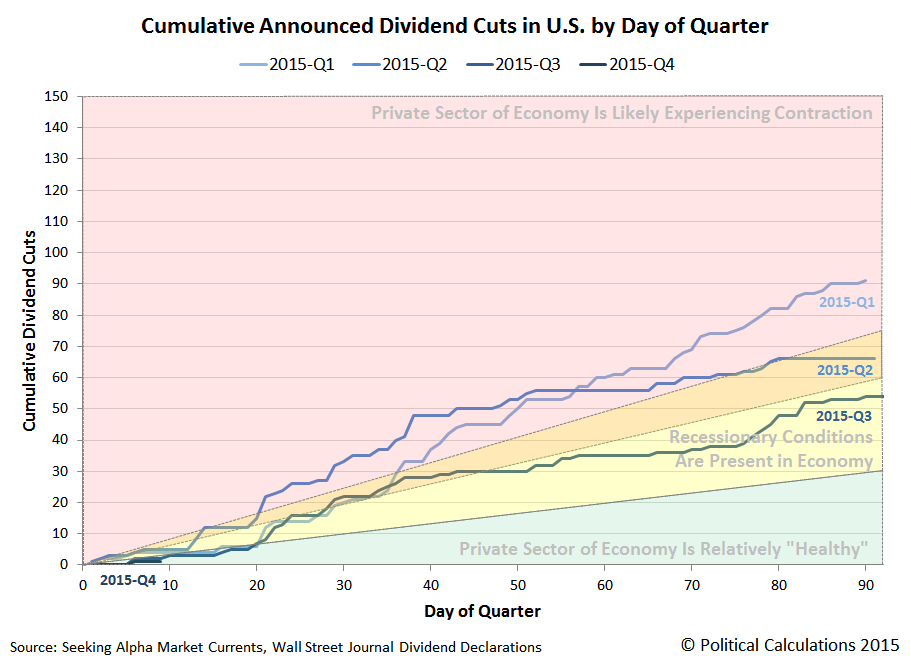 Although our near real time sources for announced dividend cuts would appear to have missed half of the firms cutting dividends in September 2015, it does provide a large enough sample to give an indication of the kinds of firms that came under the most distress during September.

The first two stock market sectors are pretty self-explanatory. First, with oil prices falling significantly during the quarter, a number of U.S. oil producers are seeing declining revenues, which are negatively impacting their bottom lines.


Second, interest rate sensitive firms had come under similar negative pressure in the first two and half months of 2015-Q3, as investors expected that the U.S. Federal Reserve would make good on their threat to finally begin increasing short term interest rates in the U.S., which had the effect of contributing to modestly boost longer term interest rates over much of the quarter. Although that boost ended when the Fed failed to follow though on the expectations it had set after its September 2015 meeting, the increase that did occur was enough to cut into the profit margins of a number of REITs, who were compelled to reduce cash dividend payments to their owners.

What's new however is the appearance of education-industry related firms among those announcing dividend cuts. While there was only one such firm that took that action, Universal Technical Institute (NYSE: UTI), which slashed its dividend by 80% from $0.10 per share to $0.02 per share, the cut comes as the entire education industry sector is coming under increased strain.

Speaking of which, since we've been following the story of the academic and financial degradation in the business situation of the Apollo Education Group (NASDAQ: APOL), we would be remiss if we didn't note two very recent developments.

First, on 3 October 2015, reports came out that indicated that enrollment in the Apollo Group's University of Phoenix division is now projected to continue falling for another year, to where it will fall some 70% below its 2010 peak of 476,500. That would put its enrollment at the end of its 2016 fiscal year at roughly 142,500, below the 150,000 level that CEO Greg Cappelli indicated that he expected it would bottom nearly three months earlier.

It will be interesting to see to what extent other firms in the education sector of the U.S. economy will come under similar levels of distress as the U.S. higher education bubble continues to burst.