What's the preliminary estimate of the amount of debt that the U.S. government owed to all its creditors as of the end of its 2015 fiscal year on 30 September 2015?

That's not such an easy question to answer, because at the time, the amount of the total public debt outstanding for the U.S. government was locked in at $18.15 trillion - almost exactly the same level it had been when the U.S. Treasury ran into the nation's statutory debt ceiling back on 24 February 2015.

But that doesn't mean that the U.S. Treasury stopped borrowing money. To get around that legal limit, U.S. Treasury Secretary Jack Lew played something of a shell game with accounts controlled by his department - primarily the retirement and disability trust funds for the federal government's civilian employees.

As a result, even though the total U.S. national debt appeared to be frozen at $18.15 trillion, the U.S. federal government was out racking up even more debt.

How much debt it racked up became clear after former U.S. House of Representatives Speaker John Boehner struck a deal with President Obama that allowed the U.S. Treasury Department to ignore the nation's laws regarding how much debt the U.S. government can take on until March 2017. When President Obama signed the deal into law on 2 November 2015, the U.S. government's total public debt outstanding immediately swelled by $339 billion, rising to $18.49 trillion by the end of the day, as the Treasury Secretary's shell game came to an end, along with any consideration that the previous figure of $18.15 trillion was ever anything more than an accounting fiction.

But what would it have been on 30 September 2015 if not for that shell game?

To estimate that figure, we assumed that in the time from 24 February 2015 and 2 November 2015, the amount of money that the U.S. government owes to all its creditors increased steadily. And that assumption put the estimated real amount of the U.S. total public debt outstanding as of the end of the U.S. government's fiscal year somewhere in the ballpark of $18.44 trillion.

And that's the figure we're displaying in the chart below, in which we've also identified how much of that debt is held by the U.S. government's major creditors as of that date. 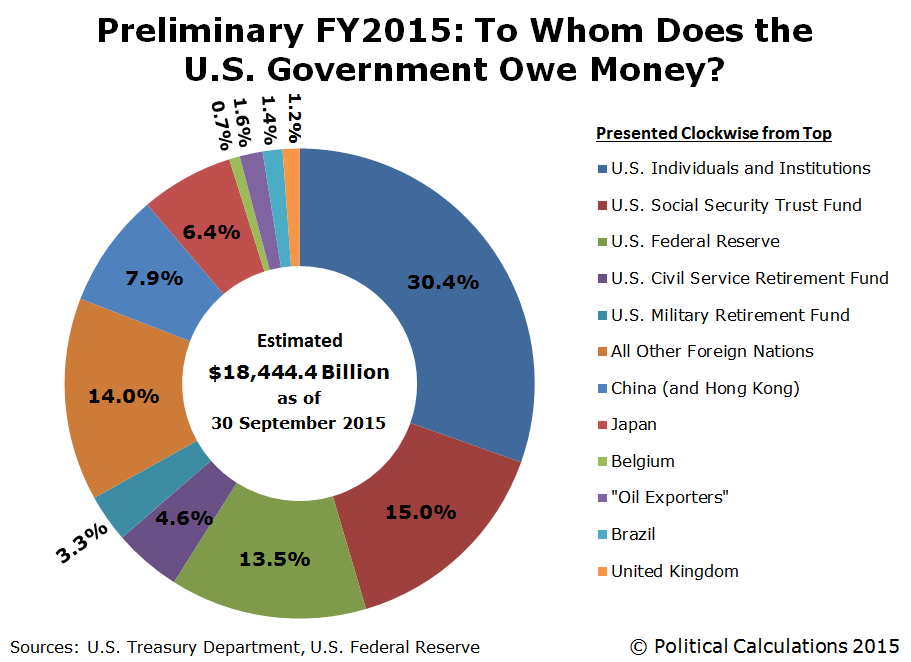 The rest of the figures shown in the chart above reflect the officially recorded amount of debt held by each entity as of 30 September 2015. Including the percentage share shown for the U.S. government's civilian retirement fund, which was artifically depressed as a result of the Treasury Department's funny money shell game. To keep the accounting simple, whatever that amount might have been is included with the share indicated for U.S. individuals and institutions (which is technically correct).