Political Calculations
Unexpectedly Intriguing!
November 26, 2015
How Turkeys Went from the Wild to the Farm 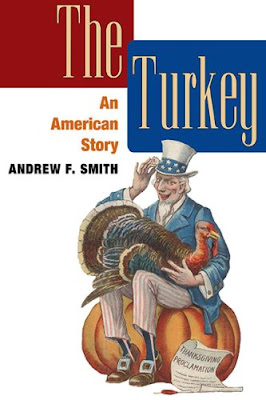 How did the turkey become the centerpiece for the United States' national dinner? Andrew F. Smith took on that question as Chapter 5 in his book The Turkey: An American Story. Here's a Thanksgiving Day excerpt, in which Smith describes the origins of turkey farming in colonial America:

Domesticated turkeys were reportedly raised in Jamestown by 1614, but they were evidently still rare in 1623 because a law was passed imposing the death penalty for the theft of turkeys if valued at more than 12 pence. Within a decade, however, tables were filled with turkeys at Jamestown. Likewise, domesticated turkeys were sent to Massachusetts Bay by 1628 if not earlier.

During the early years wild turkeys were numerous and easy to acquire. Domesticated turkeys were smaller than wild ones and known to destroy crops and cause other damage if not controlled; some farmers considered domesticated turkeys so mischievous that they were judged uneconomical to raise in large numbers. To further complicate turkey-keeping, cocks had to be separated from hens, especially when the hens laid eggs in the spring.

Because raising turkeys was a marginal activity for most farmers, little attention was directed toward breeding them. Free-range domesticated turkeys mated with wild turkeys, however, and produced new breeds, one of which was the Blue Virginia. Larger than the European turkey, it was therefore more valuable as a food source. Turkey flocks increased to such an extent that by 1744 they were being exported from southern colonies to the West Indies. This export business expanded, and by the following century American turkey growers were sending thousands of turkeys abroad. Two in Massachusetts, for instance, sent a total of 1,300 live birds to London during one month in 1833.

But the thing that really took turkeys from the wild to the farm was their role in supporting the early colonists' first major cash crop:

By far the most important reason for the growth of the domesticated turkey population in America, particularly in Virginia and Maryland, was tobacco. Colonists were lured to the southern colonies, where conditions for that crop were ideal. Tobacco was America's first agribusiness and the preeminent colonial export.

A major challenge in growing the crop was to control tobacco hornworms (Sphinx carolina), which infested fields in the South from June to August. In a time before pesticides and other deterrents, planters were helpless to fight hornworm infestation other than by sending numbers of slaves through fields to hand-pick the worms from tobacco leaves. Even then, half of a crop could be lost to the voracious creatures. To the rescue came the turkey, an omnivore that loves to feast on insects and bugs and finds the large and meaty tobacco worm irresistible. By the mid-eighteenth century planters were sending turkeys into their tobacco fields to eat the worms. In 1784 John F.D. Smyth, a British traveler, reported that turkeys were particularly dexterous at finding hornworms. A tobacco grower would keep a "flock of turkeys, which he has driven into the tobacco grounds every day by a little negroe than can do nothing else," reported Smyth. "These keep his tobacco more clear from horn worms, than all the hands he has got could do, were they employed solely for that end."

We find then that if not for the appetites of domesticated turkeys, it is likely that slavery would have been an even larger institution in early America than it became.