Political Calculations
Unexpectedly Intriguing!
November 23, 2015
No, The U.S. Has Not Hit "Peak Turkey"

Today, we're going to consider the counterargument to the data we presented yesterday, in which we showed that the population of farm-raised turkeys peaked at 302.7 million in 1996 and has fallen steadily since. Or rather, through 2014, as 2015 saw the population fall as a direct result of an outbreak of avian influenza among U.S. farm flocks of turkeys.

While the population of farm-raised turkeys in the U.S. would appear to indicate that's the case, in reality, the truth is somewhat different because today's turkeys are much larger than those of yesteryear. In the chart below, we've graphed the live weight of turkeys raised on U.S. farms for each year from 1970 through 2015 to show just how much the size and weight of U.S. turkeys has changed over time. 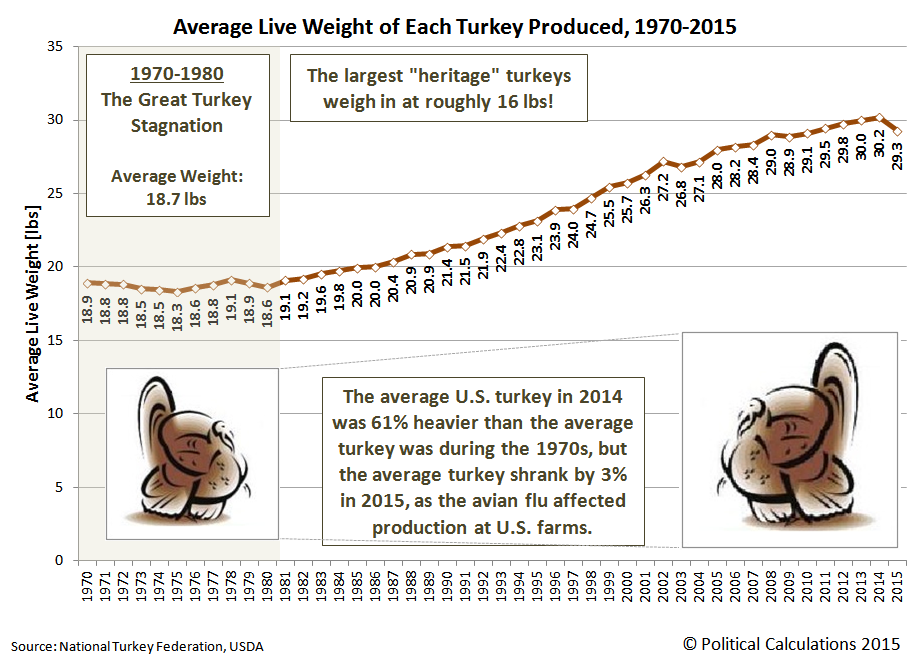 In 2015 however, we see that the average live weight of a turkey has dropped by 3% to 29.3 pounds, which is directly attributable to the outbreak of avian influenza at a number of turkey farms early in 2015. Here's how the U.S. Department of Agriculture described how the outbreak affected the average live weight of turkeys it recorded (emphasis ours):

U.S. turkey meat production in third-quarter 2015 was 1.35 billion pounds, down 9 percent from a year earlier. This continued the downward path for turkey production in 2015, with a strong increase in the first quarter, a small decrease in the second quarter, and most recently, a strong decrease in the third quarter. The third-quarter decline was due to both a lower number of turkeys slaughtered and a drop in their average live weight at slaughter. The slaughter number fell to 57.5 million, 6 percent lower than a year earlier, while the average live weight at slaughter declined to 29.3 pounds, a drop of 3 percent from the previous year. Since April the average live weight at slaughter has been lower than the previous year, for a period of 6 consecutive months—reflecting the impact of the HPAI outbreak, which caused processors to slaughter birds somewhat earlier than they normally would in order to maintain supply levels.

We find then that 2015 represents an outlier in the data for the average weight of U.S. farm-raised turkeys. 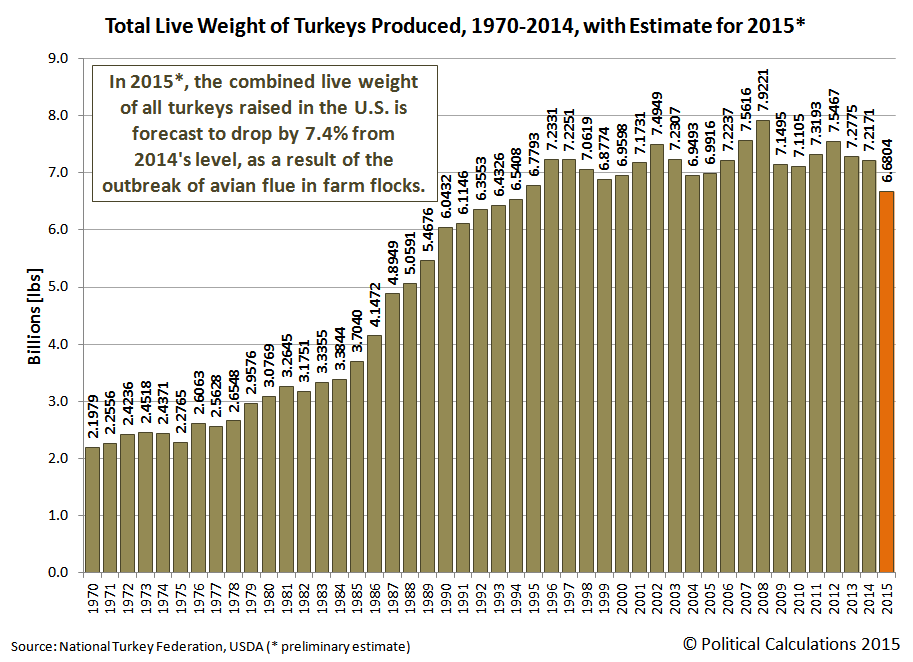 In this chart, we see that the total weight of all turkeys produced in the U.S. has fallen within a fairly narrow range in each year since 1996, ranging between 6.9 and 7.9 billion pounds in any given year from 1996 through 2014 and varying with the health of the U.S. economy, even though the number of farm-raised turkeys peaked in 1996. Meanwhile, our outlier year, 2015, fell back below the 6.9 million pound mark, but clearly would not have done so if U.S. turkey farms hadn't been forced to cull their flocks to prevent the further spread of the outbreak of avian influenza in early 2015.

With that being the case, what's important to consider in the consumption of turkeys in determining whether the U.S. has passed "peak turkey" is not their number, but their aggregate weight, as turkey meat is consumed by the pound.

A similar phenomenon can be seen elsewhere in the economy when considering the state of oil production in the U.S., where 2015 has seen a declining number of working rigs at U.S. oil fields as oil prices have fallen, but also a much smaller than might otherwise be expected reduction in actual crude oil extraction, as the remaining rigs have been made more productive.

U.S. turkey farms have likewise become much more productive over the years since the total population of farm-raised turkeys peaked in 1996, and really, since the stagnant 1970s.

Which is to say that not only has Peak Turkey not arrived, there is also no great turkey stagnation.