For an economy whose growth is hypothesized by some to be over, China is showing some surprising indications of economic expansion.

The leading evidence to support that conclusion is to be found in the air we breathe, where we find that the pace at which the trailing twelve month average of carbon dioxide is being emitted into the global atmosphere is continuing to rebound strongly from its June 2015 low. 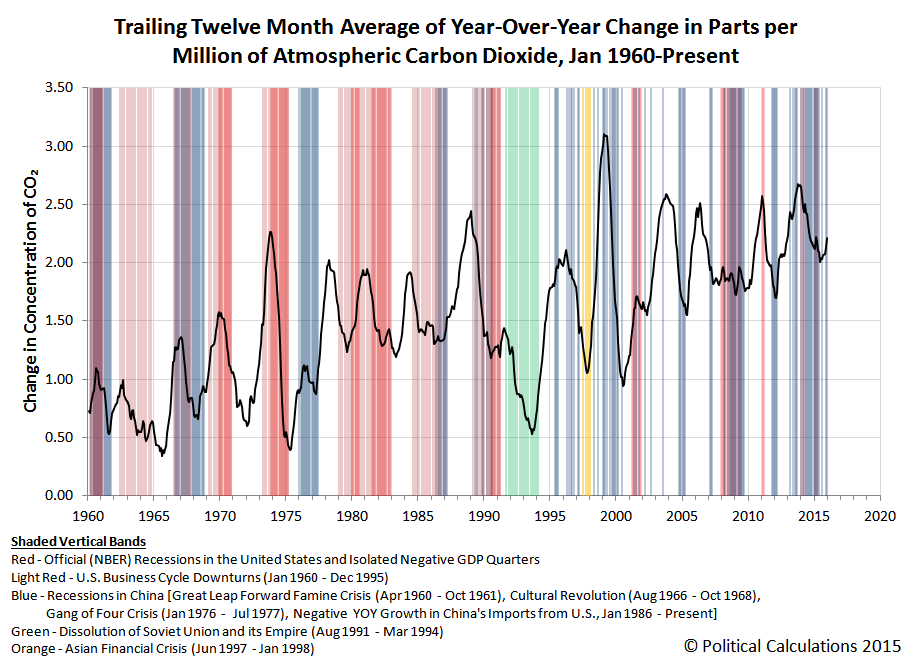 We know that China is responsible for the increase because the nation is, by a wide margin, the world's largest producer of atmospheric carbon dioxide. In fact, the decrease in the rate at which carbon dioxide was being added to the Earth's atmosphere that preceded the rebound is directly attributable to the outcome of China's political leadership's third plenum in September 2013, where they committed to reduce the growth rate at which China's economy was expanding to lower levels.

We see then the effects of their stimulus effort through a sharply increased rate of addition of carbon dioxide to the Earth's atmosphere.

On the other hand, data on the value of all the goods traded between the United States and China would initially suggest that China's economy is still experiencing recessionary conditions, with the year-over-year growth rate of the exchange-rate adjusted value of that trade falling well into negative territory. 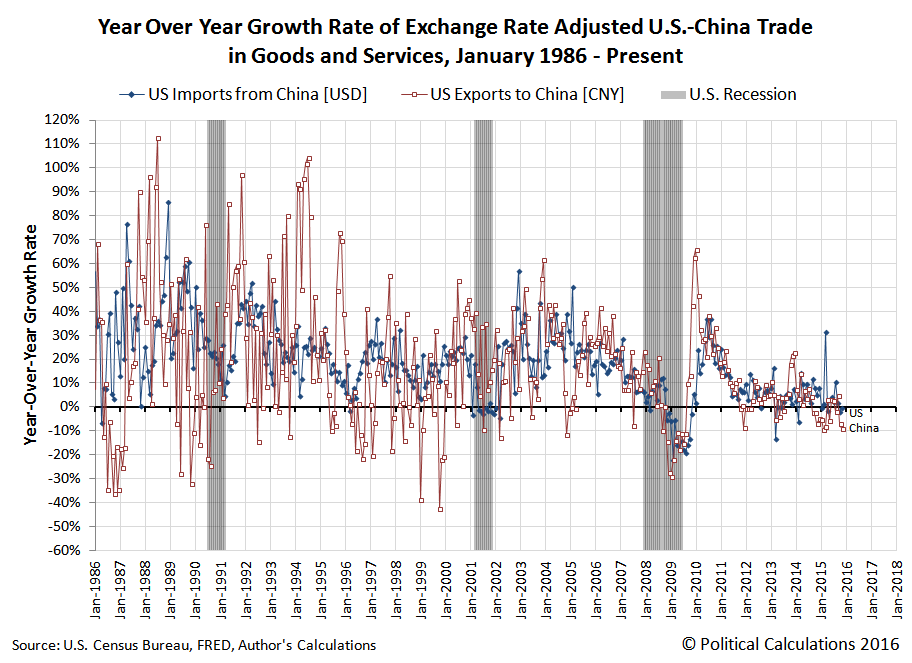 Doing some quick math, using the values of soybeans exported by the U.S. to China in October and November of both 2014 and 2015, then taking into account an average 25% decline in the price of soybeans from 2014 to 2015, we determined that the quantity of soybeans being exported from the U.S. to China actually increased by over 34.7 million bushels year over year.

Combined with the rebound in the rate at which carbon dioxide is being increased in the Earth's atmosphere, that increase in soybean consumption suggests that China's economy is experiencing some degree of expansion in real terms, which is why we find ourselves in the odd position of contradicting what is finally becoming the conventional wisdom on the state of China's economy in other quarters, long after we saw the conditions that led to that conventional wisdom first developing.

And certainly which is not to say that China's economy is out of the woods yet. These are simply positive factors that were present in China nearly through the end of 2015. Things can turn for the worse with very little notice, which may be the message that China's stock markets are currently trying to send.

In an upcoming post, we'll consider the possibility that these positive indications are really more akin to a dead cat bounce for China's economy.