It turns out that we have some sort of gift for understatement. Here is the conclusion to what we posted about what to expect for the S&P 500 for Week 3 of January 2016 well before the opening of trading on Tuesday, 19 January 2016.

The increase in stock price volatility now compared to earlier in January 2016 is directly attributable to the rather large difference in the acceleration of the growth rate of the S&P 500's dividends per share expected for 2016-Q1 and 2016-Q2. Whereas the differences between 2016-Q2, Q3 and Q4 are relatively small, meaning that shifting focus between these quarters would therefore occur within a comparatively narrow range of stock prices, that investors are now shifting their forward-looking attention back and forth between the wide difference between 2016-Q1 and 2016-Q2 means that the S&P 500 is in for a wild ride while that continues.

And so, we successfully explained all of the tremendous volatility that occurred in U.S. stock prices in the holiday-shortened third week of January 2016, before it actually happened. Our updated chart focusing on the alternative futures for 2016-Q1 shows how that volatility played out in terms of the closing values of the S&P 500 on each day of the week that was. 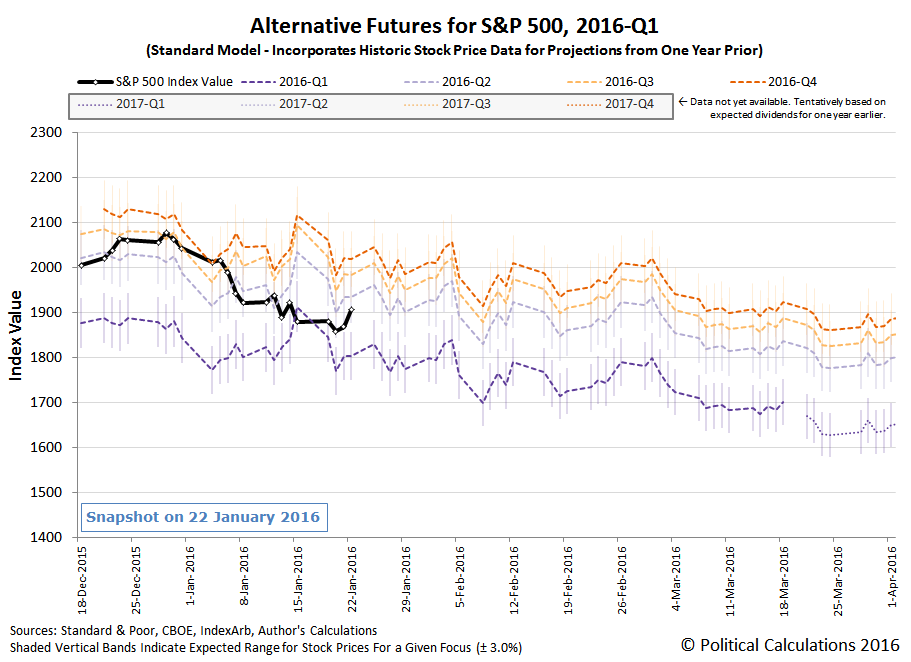 Let's zoom in on just the third week of January 2016, while also indicating the daily trading range of the S&P 500 on each trading day: 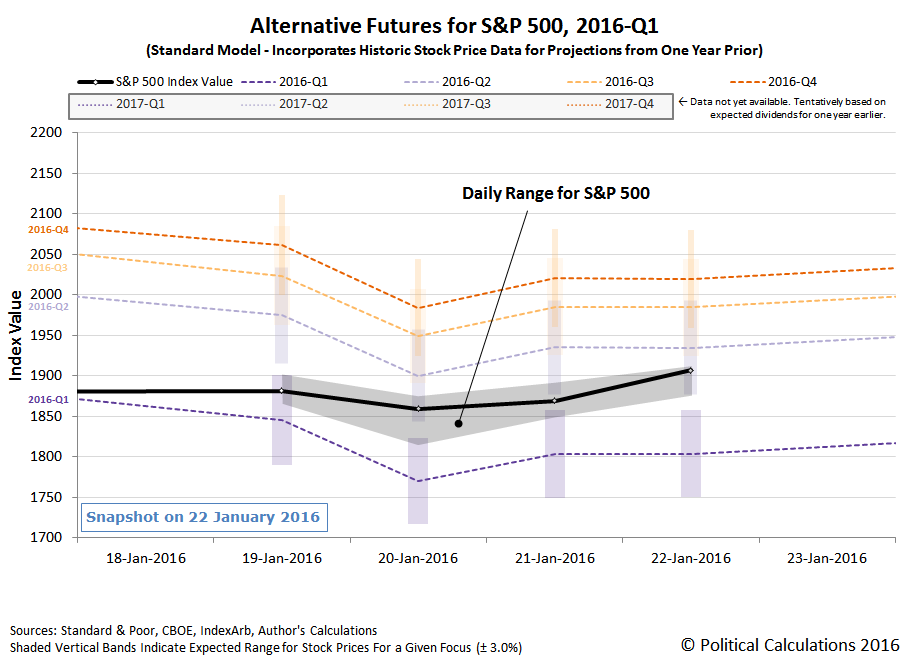 What you're seeing is exactly the result of investors swinging their forward-looking attention back and forth between 2016-Q1 and 2016-Q2, producing exactly the volatility that should be expected. Let's recap the week.

In this next week, the Federal Reserve's Open Market Committee will command an outsized portion of the attention of investors on Wednesday, 27 January 2016. In addition, earnings season continues as a number of very large companies, especially in the distressed oil industry, will be announcing their earnings and addressing investors regarding their business outlook during the week.

With investors currently focused on 2016-Q2, should the Fed hold tight to its plans to hike short term interest rates again before the end of 2016-Q1 at the same time that U.S. firms announce that their outlooks are less bright than currently expected, it is highly likely that investors will once again shift their attention back to 2016-Q1, sending stock prices considerably lower.

On the other hand, should the Fed indicate it will adopt a more dovish stance combine with news that troubled U.S. firms see the potential for real improvement in their outlook by the end of the year, then we could see a fairly strong rally as investors shift their focus to more distant future quarters.

And if the combination of market driving news mixes elements of these two scenarios, then it's likely that the market will stabilize somewhat and largely move sideways within a relatively narrower range than the previous week during the week to come.

How the next week plays out however depends on which of these alternative future scenarios becomes actual history. But then, if you could predict that, shouldn't you have won the Powerball lottery two weeks ago?