Last June, we took on an unusual project, where we extracted the advertised sale price of a single iconic can of Campbell's condensed tomato soup from dozens of newspapers and more modern day sources for each month from January 1898 through the present.

Today, we're updating our results through December 2015, in which we have been able to fill in many of the missing data points that we weren't able to previously document. Our first chart shows the sale price of a Number 1 can of Campbell's Condensed Tomato Soup spanning nearly each month from January 1898 through December 2015. 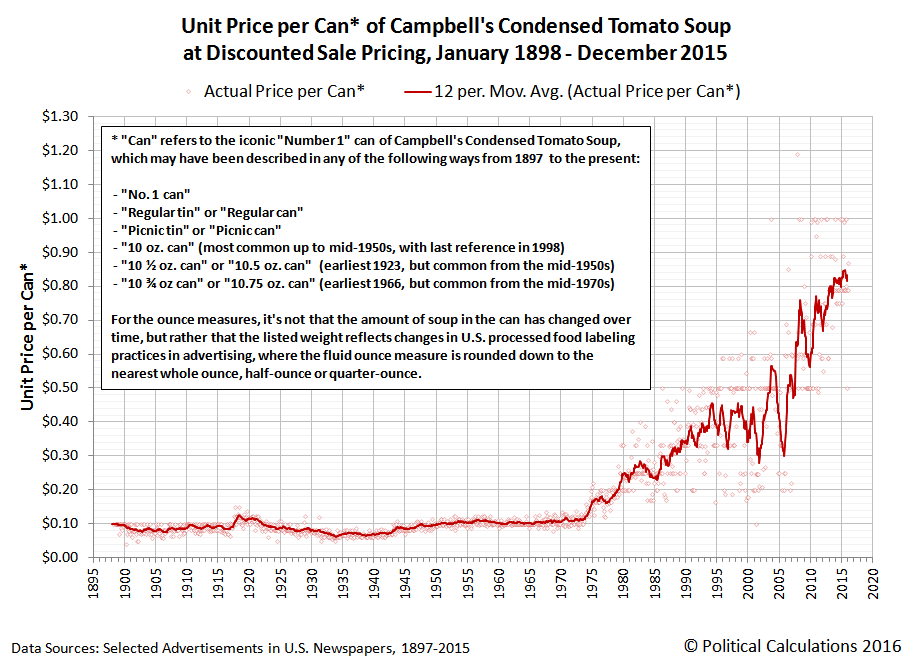 And for good measure, our next chart presents the same data on a logarithmic scale: 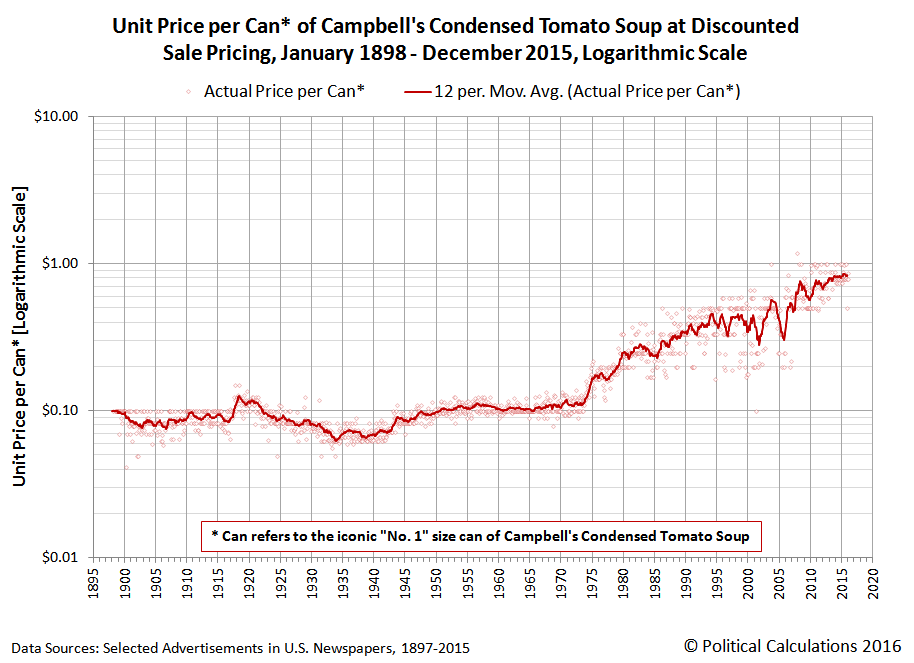 While econometricians who lack a solid understanding of economic theory might be puzzled as to why this kind of nominal price data is extremely useful and require hand-holding to understand why documenting the price of a single product that has been continuously available on American grocery store shelves for 118 years would be valuable, all we'll say is that we have been rewarded for our efforts through the insights our exercise has provided.

That said, we still do have some missing months in our coverage, which are now limited to the following months:

After the three months in 1898, which coincide with the period of time during which Campbell's then brand-new condensed soup products were being first introduced to Americans, it's perhaps surprising to find that all the months for which we're missing price data for Campbell's condensed tomato soup are all within a four year long period of time in recent years, from July 2004 to July 2008.

If you look closer however, you'll see that most correspond to the middle of summer in each year, specifically in July, which most likely corresponds to the slowest month for soup sales in the U.S. and thus is the month in which grocers are least likely to advertise sales for canned soup!

The exception is 2007, which is especially troubling because this corresponds to a time when the price of Campbell's tomato soup was rapidly escalating, where the missing data would help fill in what was happening at this time of significant inflation that established itself in the months ahead of the official onset of the Great Recession in January 2008.

Speaking of which, we should also note that the highest price we've recorded in our data is the $1.19 per can that was documented in New York City in the Battery Park Broadsheet for the period from 26 September through 11 October 2007, where the price of $1.19 per can at Fresh Direct was actually the lowest price recorded among several grocery stores in the city.

2007 also marks the time when the advertised sale prices of Campbell's Tomato Soup stopped dropping below the 50 cents per can mark. A year earlier, it wasn't uncommon to see sales of 5 cans for $1.00, or 20 cents per can.

Why that happened at that time is its own separate story....

Bonus: We've filled in the gaps and have updated the price data through January 2021!