Before we get into explaining the major market driving events of the week that ended on Friday, 19 February 2016, we're going to test your ability to interpret what our alternative futures chart is communicating. Here's the chart showing all the action that has taken place in the S&P 500 since 18 December 2015, where we've drawn a red box around the most recently completed week. 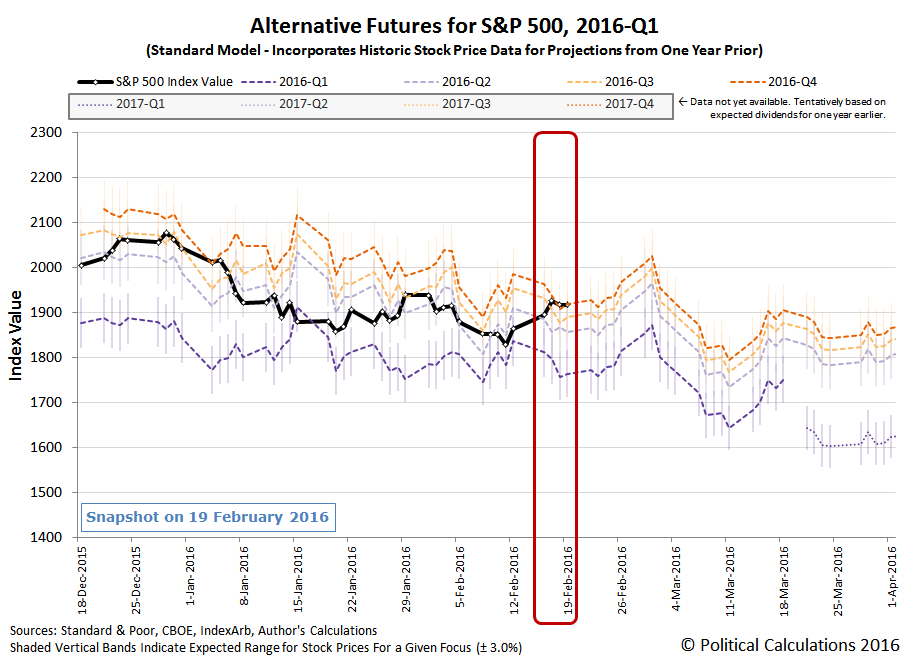 Here are your test questions:

The first four questions are pretty easy, or should be really easy if you're one of our regular readers!

The last question is definitely the hardest, and we don't expect that you would know the answers off the top of your head without doing some research. Fortunately, we kept track of the main market driving events that we saw during the past week, so all you need to scan through the following discussion of what we found to be the major market driving events of the third week of February 2016 (or if you prefer, the seventh week of 2016), where nearly all of the above questions will be answered!

So, all in all, things went just about exactly as our alternature futures model led us to suggest last week:

The good news though is that stock prices are likely to be less volatile over the next two weeks than they were in either January 2016 or in the first two weeks of February, at least in the absence of market driving news that might cause investors to suddenly shift their attention with little warning to more distant points of time in the future, which would be a good thing in the short term if that were to happen.

And so it was in Week 3 of February 2016. We'll know next week if that continued to hold in Week 4, after which, what we called the "short term" will be just about over....