According to new jobless claims, economic distress within the U.S. has spread outside of the oil patch states, as what had been a trend of improvement stoked by falling oil prices has apparently come to a clear end.

Here is how we know. Thanks to our adaptation of a unique kind of statistical analysis that was originally developed by Bell Telephone's Walter Shewhart over 90 years ago to improve the quality of both manufactured goods and the processes used to produce them, we are able to identify major statistical trends in the rate of seasonally-adjusted new jobless claims, including the timing of when they begin and when they end, which we base on the rules developed by Western Electric to determine when a break in an established statistical trend has occurred.

Having laid that basic groundwork, lets start by looking at the most recent statistical trend for new jobless claims for the entire United States. 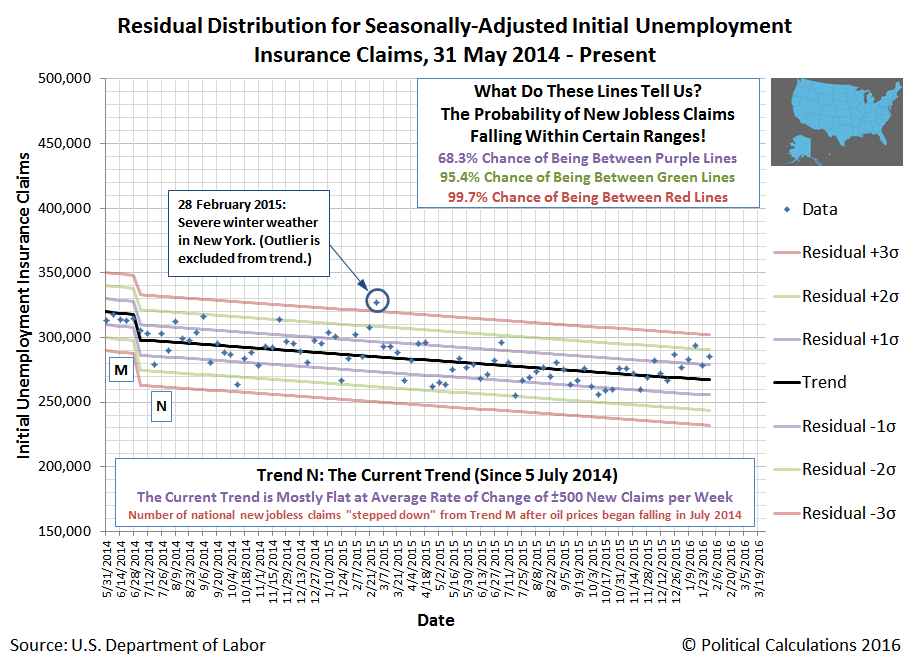 In this chart, we see that what we identify as "Trend N" is still intact, as all recent data points are within the range of values where we would expect to find them based upon the variation of the data with respect to the main overall trend since it began. This trend, which began when oil prices began falling in late June and early July 2014, has been characterized by the number of new jobless claims falling at an average pace of 400-500 per week.

We also observe that there is a microtrend within the data that suggests the larger trend may be breaking down, where all data points since 28 November 2015 falls on one side of the main trend line, but nothing as yet to confirm that it is on its way to fully breaking down.

Since global oil prices have been falling steadily since September 2015, so much so that average retail gasoline prices within the United States began dropping below the $2.21 per gallon level that marked the bottom of the previous fall in oil prices from July 2014 through January 2015, we quickly assumed that the increase in new jobless claims was likely happening in the eight states where high production cost oil industries represent a significant share of their local economies: Colorado, North Dakota, Ohio, Oklahoma, Pennsylvania, Texas, West Virginia and Wyoming. 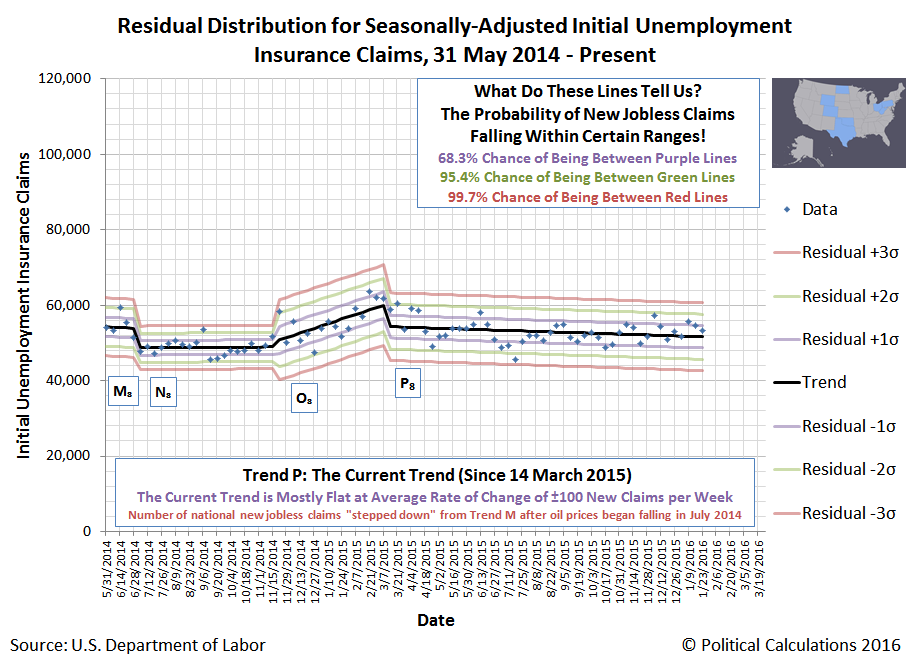 This chart is pretty remarkable in that what we identify as "Trend P8" is very well intact, with the most recent data points falling mostly within one standard deviation of the main trend line. As you can see, Trend P8 is characterized by a flat-to-slowly falling overall trajectory, which had its origins after the sharp increase in new jobless claims in these eight states during the first period of falling oil prices, as oil prices rebounded in the months from January 2015 through July 2015.

Though oil prices have fallen in each of the months since, there has been little change in that overall trajectory. Our thinking here is that the layoffs that occurred during the earlier fall in oil prices in these states effectively cleared the field for additional layoffs in these states, at least until oil prices drop below the level where they previously bottomed.

It has only been in very recent weeks where that has happened, so we'll continue monitoring new jobless claims in these states to see if our hypothesis is valid, as changes in new jobless claims tend to lag some 2 to 3 weeks behind the events that prompt changes in the outlook for businesses.

Of course, having isolated these 8 states means that we've also isolated the remaining 42 states outside of the oil patch. And there is where we see a significant statistical break in the trend that previously existed. Our next chart shows when that trend broke down. 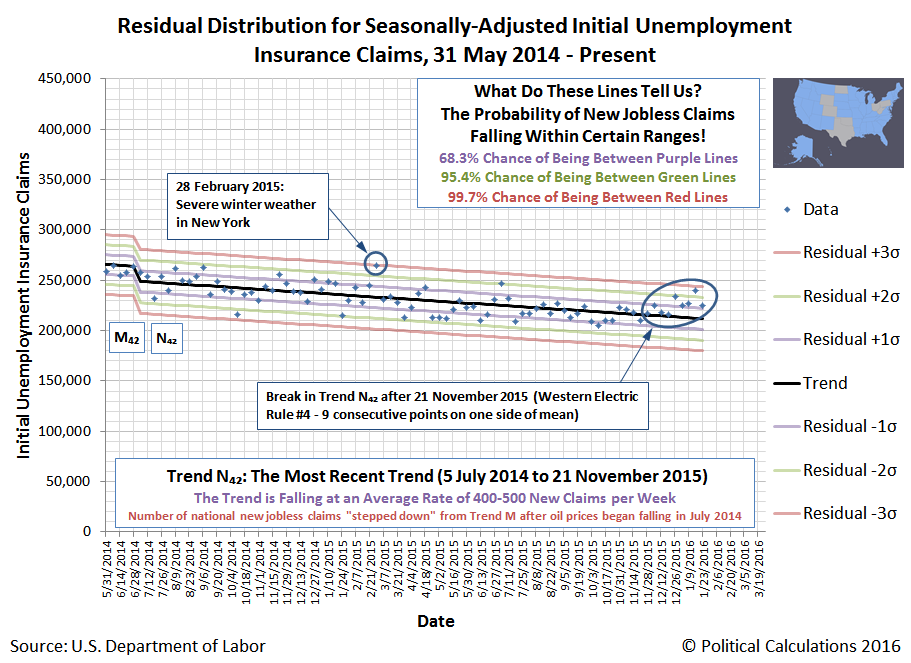 As we might expect, the statistical trends for the other 42 states outside of the high production cost oil states more closely resembles the overall national trends, as falling global oil prices have not negatively impacted the economies of these states the way it has in the oil patch. The most recent "Trend N42" has been characterized by a steadily falling level of new jobless claims each week, declining at a rate of 400-500 per week.

But all of the data in the nine weeks from 28 November 2015 onward has been above the main trend line, which violates Western Electric's Rule #4, which identifies this specific pattern as a very unlikely event for a well established statistical trend. Moreover, we also see that the micro-trend represented by this limited number of data points appears to be following an upward trajectory.

The new jobless claims data, coupled with the kind of statistical analysis that has been commonly used by U.S. manufacturing firms since the 1920s, is telling us that layoffs at U.S. firms are now on the rise in states that are outside of the oil patch.

That's not what we expected to see, and certainly isn't what we wanted to see, but there it is all the same.