What effect does El Niño have on the rate at which the concentration of carbon dioxide changes in the Earth's atmosphere changes? And for that matter, what is the effect of El Niño's cooler counterpart, La Niña, have on airborne CO2 as well?

We're asking the question today because we've ruled out China's attempts to stimulate its economy in 2015 as a significant contributor to the increase in atmospheric CO2 levels that have been observed since July 2015. In China's place, we're considering the impact that widespread and intense wildfires in Indonesia as the most likely culprit that contributed to the increase measured at the remote and high altitude Mauna Loa Observatory in the middle of the Pacific Ocean.

Reports on Indonesia's wildfires have pointed to the effect of El Niño on weather patterns as an influence that explains its severity, where the warming of surface waters in the Pacific Ocean contributed to drier than normal conditions on the Indonesian islands of Sumatra and Borneo, which in turn, promoted the rapid spread of wildfires on these islands once they had started.

That observation agrees with what the National Aeronautics and Space Administration (NASA) has reported on the topic back in 2004.

Scientists notice significant changes in the air during an El Niño year. Concentrations of two important greenhouse gases, methane and carbon dioxide, go up significantly. These gases are normally present as the product of burning fossil fuels like gasoline, oil or coal. Many scientists thought the increases in greenhouse gases during El Niño years were likely due to a changing balance of plant growth and death. However, new research is providing a different diagnosis to the source of the Earth's heartburn.

Wildfires seem to ignite the geological version of the big belch. During El Niño, vast areas of the tropic regions dry out and become vulnerable to fire. During the 1997/1998 El Niño, wildfires ravaged huge areas in Latin America and Southeast Asia, belching large quantities of carbon dioxide (CO2) and methane into the air.

"We found that a large part of the [carbon dioxide] increases [were] the result of increased fire activity," said Guido R. van der Werf, of NASA's Goddard Space Flight Center.

That seems like a promising explanation, so we thought we'd take advantage of the chart that we've already developed showing atmospheric CO2 against the backdrop of globe-impacting recessions and tweak it to show the changes in carbon dioxide levels against a backdrop of El Niño (red) and La Niña (blue) events instead. The resulting chart, should give a good idea at how well correlated global weather-impacting El Niño events are with rising CO2 levels is presented below: 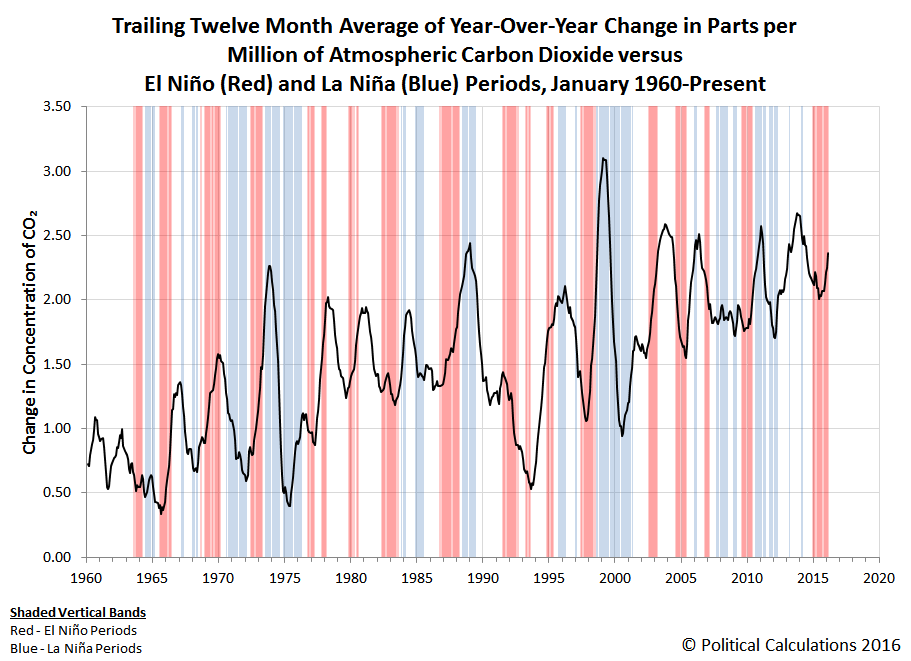 The chart provides about as simple of a check for correlation as can be made. In quickly scanning it, we quickly would appear to see that El Niño events are indeed correlated rising concentrations of atmospheric carbon dioxide levels.

That was a surprising result to us. Looking next at La Niña periods, we see these events are actually correlated with transitions between rising and falling rates of CO2 increases in the Earth's atmosphere. Or more accurately, rising-then-falling rates, and also falling-then-rising rates.

Keep in mind that what we're doing is more of a simple, first-pass kind of analysis. We're not considering things like the relative strength of the various El Niño or La Niña events to assess what correlation that factor might have on what we observe in the trends for carbon dioxide increases in the Earth's atmosphere.

Based on what we've observed here however, we would say that changes in economic activity levels are a more reliable predictor of changes in the rates at which CO2 levels in the Earth's atmosphere change than either El Niño or La Niña events. But then, who's to say that these weather events might not be influencing the world's economic activities, where in particular, La Niña events may have something of a moderating or stabilizing effect, while El Niño might have more of an amplification effect on CO2 levels?

We wonder if Tim Haab is still looking for project ideas for first year PhD students?...