Today, we're going to revisit a hypothesis we proposed at the beginning of the year, where an uptick in China's increased importation of U.S. soybeans and increases in atmospheric carbon dioxide prompted us to propose that these facts might be evidence of some success in the Chinese government's efforts to stimulate China' slowing economy during 2015.

Although the available trade data at that time supported that hypothesis, the trade data that has come out since has not. We confirmed last month that China's year over year consumption of U.S. soybeans declined in both nominal and real terms.

That still left the question of where all the extra carbon dioxide in Earth's atmosphere was coming from. As we've seen in our previous analysis, China is one of the few nations on Earth where changes in its leadership's economic policies show up in the air we breathe, so we proposed a second hypothesis that might account for why the rate at which the world's CO2 levels had reversed and begun to increase after July 2015, which we'll call the "dead cat bounce" hypothesis. 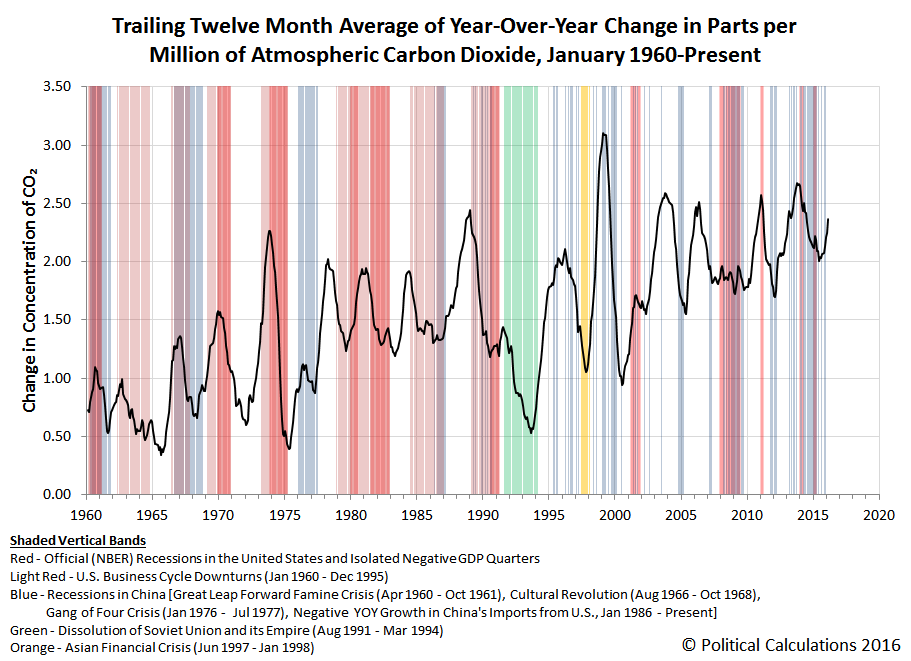 Here, we considered how China's political leadership would act to stimululate its economy by accelerating the construction of coal-fired power plants, where having more of these plants go into operation would most certainly increase the nation's output of carbon dioxide emissions.

If China's faster construction of coal-fired power plants were behind the increase in global CO2, we should alse be seeing China's imports of traded goods increase, particularly raw materials needed for producing manufactured goods. As we saw yesterday however, that's not happening, as the very latest evidence suggests that no significant improvement in China's economic performance is taking place.

What that means is that something else is most likely behind the recent, rapid escalation in the level of carbon dioxide levels in the Earth's atmosphere.

Using the Mauna Loa Observatory's data for atmospheric carbon dioxide levels to establish the timing for what might have triggered the reversal and increase in the rate at which CO2 is increasing in the air, we found one prime candidate that might fully account for the increase, which just happens to be coming from just one nation: Indonesia.

In July 2015, a large number of forest fires began igniting in Indonesia's forests and peatland, which soon grew out of control in what has since been described as an ecological disaster.

Until seasonal rains dampened their burning, Indonesia's wildfires burned around five million acres (7,812 square miles, or 20,234 square kilometers) of the nation's forests and peatlands, putting an estimated 600 million tons (544 million metric tons) of CO2 and other greenhouse gases into the planet's atmosphere.

In reviewing these stories, the influence of the current El Niño-driven weather patterns is often cited as a contributor to the severity of Indonesia's wildfires, having produced drier conditions for the southeastern Asian nation that made fires spread more easily. In an upcoming post, we'll explore the extent to which either El Niño or its cooler La Niña counterpart would appear to contribute to the rate of increase of global atmospheric CO2 levels.