We've finally gotten lucky, so to speak, with the S&P 500 behaving differently than what our futures based model of how stock prices behave would otherwise indicate! 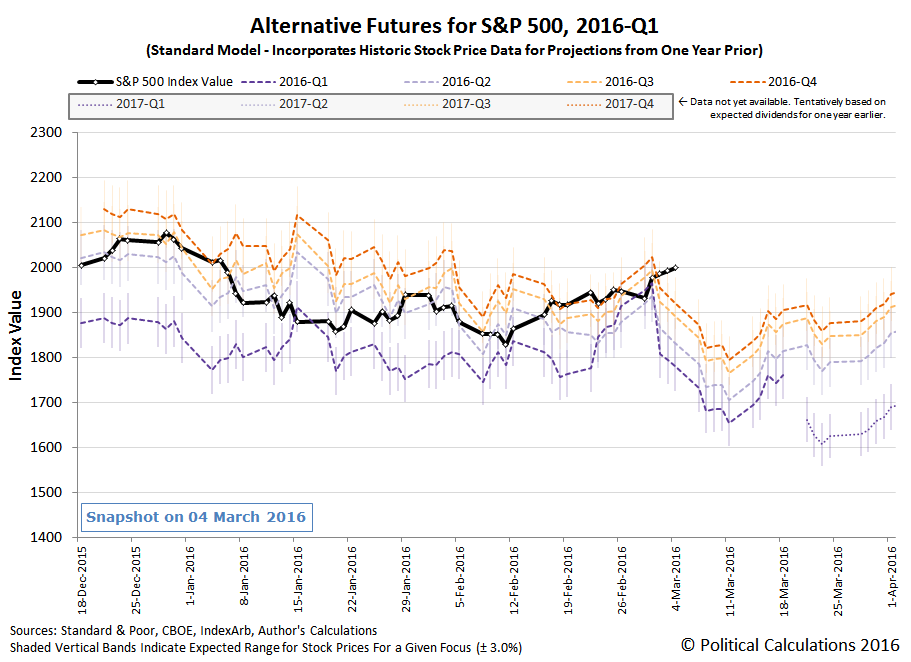 Not only is the S&P 500 appearing to defy gravity, but its trajectory over the first four days of March 2016 is so seemingly steady as to defy explanation!

But we wonder - is our model experiencing another one of those echoes that disrupt its ability to forecast? Or did our model simply get four days ahead of itself, where it projected stock prices could reach the level they did on Friday that many days earlier?

We can't answer the second question yet, but we can answer the first. What we'll do is compare what our model projected for this period back in the middle of January 2016 with what its showing through 6 March 2016. Let's animate how much the future has changed between those two points in time:

That's seems to be quite a lot of movement, particularly for the future associated with investors focusing their forward-looking attention upon 2016-Q1, but if we look at the alternatives for the three more distant points of time in the future (2016-Q2, 2016-Q3 and 2016-Q4), we see that the likely trajectories for future stock prices depending upon which point of time in the future that investors are fixing their attention upon really didn't change that much over the last seven weeks.

That's also true for the projections for the remainder of March 2016, which suggest that stock prices are in for a rough ride before recovering. However, that apparent trajectory is really an artifact of the historic stock prices we use in our model to project their future trajectory, and as such, it is an echo of past volatility, which means that our model will be less accurate until that echo subsides.

Of course we can! For short periods of such apparent echo-driven volatility in our model's projections, it's just a matter of connecting the dots for the trajectories on both sides of the echo event. And for that, let's look past the end of 2016-Q1 to get an early look at what lies beyond: 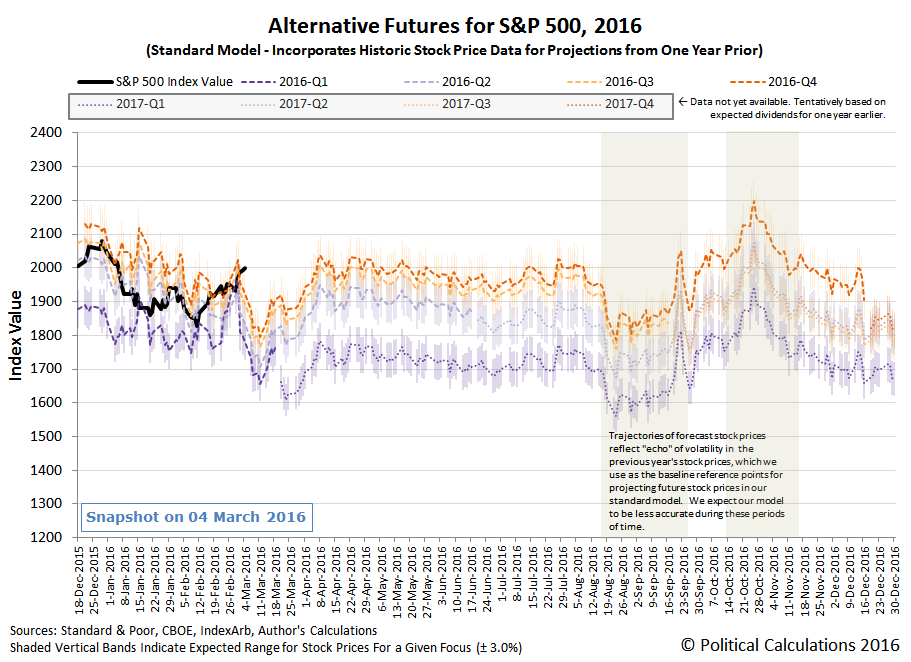 That makes it easy, doesn't it? Provided investors keep their forward-looking focus on 2016-Q4 in making their current day investing decisions, we can expect that the S&P 500 will continue to track largely sideways (plus or minus 3% of their current value of just under 2000), through the end of March 2016.

And by extension, that will largely hold true up to August 2016, where we already anticipate having to deal with another echo event in our model.

Should investors shift their forward looking focus to a different point of time in the future, stock prices will rise or fall accordingly. The only thing we can say for sure is that given where stock prices are today, should that happen, they are more likely to fall in the near term, with how far they fall defined by which point of time in the future investors focus their attention upon.

The main wild card for what we're able to project today is the alternative future associated with investors focusing upon 2017-Q1, for which we'll get a first glimpse later this month.

Looking backwards, we see only one notable market driving event in the first week of March 2016 that significantly drove U.S. stock prices: the influential New York Fed president William Dudley's assertion on Tuesday, 1 March 2016 that he was "tilting" his economic outlook to the downside, which when combined with news of economic data that was initially viewed as weak prompted investors to shift their attention from the 2016-Q1/Q2 time frame toward 2016-Q4 in a small Lévy flight rally, where it remained throughout the rest of the week.

In the days since, stock prices have only moved half as much, despite the influence of what ZeroHedge describes as the biggest bear market short squeeze since November 2008.

But as we've previously observed, that's the mechanism by which Lévy flight rallies accounted for by our futures-based model come to be.