Since January 2007, the GDP of the United States has been boosted by an unusual source: the wars it is fighting abroad.

We can see that from our pioneering analysis of the upcoming July 2016 revision of national GDP, which becomes clear when we pair that data with the national roll up of GDP data for the individual 50 states and the District of Columbia.

The difference between the two data series is entirely made up of the contribution to the nation's GDP from federal military and civilian activity located overseas, which because it falls outside of the territory covered by the U.S. Bureau of Economic Analysis' Gross Domestic Product measurements, cannot be attributed to a particular state.

And because it primarily represents the work of contractors to support the U.S. government's various military and foreign policy endeavors overseas, primarily in Iraq and Afghanistan, it represents the hidden contribution to the national Gross Domestic Product of the United States from its foreign wars. 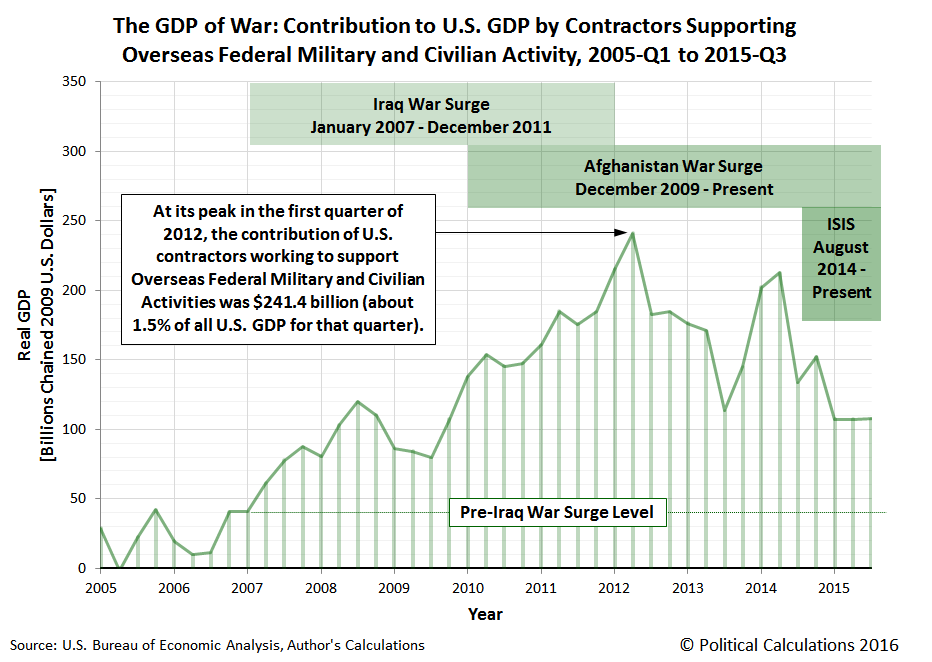 What this chart reveals is just how much the unknown soldiers of Afghanistan and Iraq contributed to the economy of the United States, which may very well be the only quantifiable recognition they will get.

President Barack Obama, speaking at Arlington National Cemetery, used standard language of reflection declaring, “We honor the sacrifice of the thousands of American servicemembers — men and women — who gave their lives since 9/11, including more than 2,200 American patriots who made the ultimate sacrifice in Afghanistan.” This is factually accurate.

However, it overlooks the important sacrifices made by non-service members on behalf of military missions. Since 9/11, a total of 1,592 private contractors (approximately 32 percent of whom were Americans) working on Department of Defense contracts were also killed in Afghanistan. Last year, private contractors accounted for 64 percent of all U.S. deaths in Afghanistan (56 service members and 101 contractors died). But we cannot know exactly where last year’s deceased are from, because shockingly the U.S. Department of Labor “does not routinely track the nationality of workers injured or killed under any of the laws administered by the program.”

This common practice of omitting the contractors’ role in U.S. military operations is troubling for several reasons. It overlooks their service and sacrifice, it disperses the burden of war onto poorly paid or protected locals or third-country nationals, and it gives a false impression of a much smaller U.S. military footprint and national commitment. Whenever the White House and Pentagon announce how many troops will be deployed to Iraq or Afghanistan, they never mention how many contractors will be deployed alongside them. When journalists and analysts request information, officials and spokespersons seem to never have it on hand, and it’s difficult to later obtain accurate or updated estimates....


This relative disregard for contractors is especially puzzling given that their support for recent military missions spans almost all phases of operations: shaping the environment, deterrence, support to stabilization operations, and civil governance. Their tasks include training, intelligence, transportation, translation, and force protection. But “contractors” is a dirty word in some military and policy circles, one that many Americans may conflate with the notorious firm formerly known as Blackwater, which was responsible for the massacre of 17 Iraqis in September 2007. However, even at the height of the surge, Blackwater employees comprised only 1 or 2 percent of all contractors in Iraq.

At its peak in the first quarter of 2012, the contribution of U.S. contractors working to support Overseas Federal Military and Civilian Activities was $241.4 billion, which is about 1.5-1.6% of the entire GDP of the U.S. that was recorded for that quarter.

It likewise represents the billions of dollars that were wasted through what can only be considered to be the military and foreign policy failures of the Obama administration in both Iraq and Afghanistan.