The Boeing company's KC-46A Pegagus program for the U.S. Air Force has had a very troubled history. 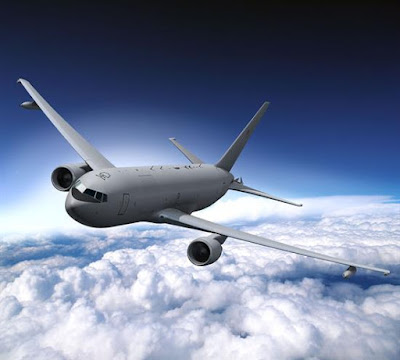 The KC-46A is a military version of the Boeing 767 commercial jetliner, which is converted into a airborne refueling vehicle for military aircraft. In theory, the tanker should represent a very cost effective solution for the U.S. A‏ir Force to be able to extend the range of its aircraft to reach any corner of the world to carry out their missions.

In practice, turning a Boeing 767 into an aerial refueling tanker has proved to be problematic. Not necessarily because of technical challenges, so much as because of the company's poor business decisions.

Although the aircraft was conceived in the early 2000s to meet the Air Force's need for a new, more capable aerial refueling vehicle to replace its aging KC-135 and KC-10 tankers, also manufactured by Boeing (and in the KC-10's case, McDonnell Douglas, which merged with Boeing in 1996), the development of the aircraft was delayed for a decade because of a hiring scandal that led the company to fire its CEO and CFO in December 2003.

It wasn't until February 2011 that the U.S. Air Force finally awarded a $4.9 billion fixed-price contract to build 150 KC-46A tankers to Boeing, which would be the initial step toward replacing all 400+ aircraft in the Air Force's refueling fleet.

But to win the lucrative contract, Boeing aggressively underbid its main competitor, EADS North America, even though the terms of the fixed price contract would place it at risk of business losses if the company's costs to produce the aircraft escalated by more than planned, unlike the cost-plus contracts that are more typical in military programs.

What’s unusual about the tanker program is that Boeing signed up for a fixed-price development contract despite all the uncertainties surrounding such efforts. That decision was dictated in part by a desire to deny arch-rival Airbus access to the U.S. military-aircraft market, and in part by a recognition that the tanker program could become one of the biggest projects in the company’s history. In other words, a franchise worth losing some money on in the near term to secure for the next 50 years.

The problem for Boeing is that its costs to produce the KC-46A tanker began going up almost immediately after it was awarded the Air Force contract in 2011.

Boeing is projected to exceed its cost ceiling by as much as $300 million — about 6 percent — on the initial contract to develop and build Air Force aerial-refueling tankers, according to government officials. The jet maker will have to absorb the extra costs.

Boeing's projected costs to manufacture the KC-46 continued to rise in 2011, reaching a critical point in December 2011 after it reached a 4-year agreement with its biggest union in Washington state, some 10 months earlier than planned.

The union pushed to nail down a contract early to ensure that Washington keeps final assembly of the modernized 737, the MAX. Earlier this year McNerney had signaled it could go elsewhere.

Many in the aerospace industry couldn’t see a business case for Boeing to put the MAX anywhere but Renton. But the union — stunned by Boeing’s choice in 2009 of South Carolina for its second 787 Dreamliner assembly line — couldn’t take that for granted.

In committing to produce the 737 MAX commercial airliner in the Puget Sound, the contract ensured that Boeing would have higher labor costs, which would pinch the company's bottom line.

For the KC-46A program, the combination of the company's underbidding to win the contract to build the aerial refueling tanker with the program's escalating costs and now the guarantee of higher labor costs meant that something had to give to keep the tanker program in the black.

So Boeing chose to shutter its plant in Wichita, Kansas, where it planned to perform the conversion of its 767 commercial airframe into the KC-46A refueling tanker and also where it had been performing maintenance on the Air Force's KC-135 tankers, even though the state's politicians had consistently gone to bat for the program over its history.

Their steady support however was no match for the company's pinched margins.

Although this story fits all too easily into the narrative that Boeing is a heartless industrial behemoth driven solely by profits — the Bain & Company of the aircraft business — the truth is a bit more complex. It doesn’t make sense for a big defense contractor to alienate its political base unless there are vital concerns at stake, and the reality is that the Wichita plant’s revenue stream has been slowly drying up for some time. With key programs coming to an end, the tanker effort would have had to carry much of the under-utilized facility’s overhead, making it unnecessarily expensive.

It’s not that Boeing is trying to escape organized labor. Its Seattle-area workforce is famously militant. But the company has to find efficiencies everywhere it can to make a profit on the tanker program, and therein lies an overlooked fact about Pentagon purchasing practices. The acquisition strategy that the Obama Administration put together to finally break the impasse over purchase of a new tanker was what people in the defense business call a “price shootout.” In other words, price was the key determinant of who won, because both bidders met all the other criteria for selection.

Unfortunately for Boeing and the workers of Kansas, the other bidder was Airbus, a European company that the World Trade Organization has found to be chronically in violation of treaties regarding export subsidies. Subsidies were the main reason why the European company thought it could beat Boeing in its home market to win the tanker program. And they were the reason why Boeing management was convinced it had to bid very aggressively if it was to have any hope of besting its rival. Senior executives were so nervous about the bid that they discussed it with Boeing’s board of directors before going forward.

The bottom line is that Boeing assumed considerable risk to secure the tanker contract and keep Airbus out of its home market. Pentagon acquisition officials were able to brag that they had secured a new generation of aerial-refueling tankers for less money than anyone thought possible. But here’s the downside: Boeing ended up having to cut costs everywhere it could to avoid losing money on the tanker program, including Wichita. Keeping an under-utilized, high-cost facility in the production mix would have eroded the program’s already razor-thin profit margin. With Boeing’s resources over-stretched trying to match Airbus’s heavily subsidized development efforts on the commercial side, Wichita had to go.

Over 2012 to 2013, Boeing transferred all of the 2,170 jobs and work at its Wichita facility to other locations, marking the permanent loss of $570,300,000 in annual revenue to Wichita's economy, which equates to 0.5% of the state of Kansas' entire GDP. With many of the city's general aviation manufacturers also struggling to sell their small aircraft products to the world market during that time, Boeing's choice to move the production of its KC-46A tanker program was a major blow to the entire region.

Four years later, the program is still greatly troubled, as it was just reported that Boeing's KC-46 tanker isn't capable of refueling Boeing's C-17 cargo planes in the air because of a major design flaw.

The plane is designed to refuel jets in midair, replacing the KC-135, a plane that has been around since the 1950s.

However, Boeing has admitted a flaw in the plane's refuelling boom means it will not be delivered in August 2017 as expected.

By the time the KC-46A aerial refueling tanker enters military service, more than two decades will have passed from when the aircraft was first conceived, where it will have cost Boeing at least $1.3 billion more than it planned to put the plane into service. Not to mention the jobs and reputations of several of its top leaders.

The cost of redesigning the tanker's refueling boom has yet to be added to that total. For a program that has always had razor thin margins, that cannot be a good development for Boeing. Perhaps winning the KC-46A contract wasn't really worth it.