What is the "typical" annual trajectory for the S&P 500 during a year?

We're attempting to answer that question today using some 66 years worth of historical data for the S&P 500 from 1 January 1950 through 31 December 2015, as published by Yahoo! Finance.

As an added bonus, because the actual trajectory of the S&P 500 during these years can be very different from these "typical" trajectories, we'll also identify the best ever and worst ever values recorded on each trading day during this 66 year-long period, just to give a sense of how different the actual performance of the S&P 500 has been with respect to its "typical" performance. Our results are presented in the following chart, where the divisions on the horizontal axis roughly correspond to each calendar month of the year. Meanwhile, the best ever trajectory shown in the chart above, which represents the highest value recorded in any year, and not the trajectory of any specific year, shows the S&P 500 reaching as high as 144.1% of its first day of the year starting value by the end of the year. The worst ever trajectory, representing the lowest value recorded in any year for each trading day, shows the S&P 500 falling to be just 61.5% of its value at which it closed on the first day of the year.

Just for fun, lets zoom in on just the mean and median annual trajectories for the S&P 500. 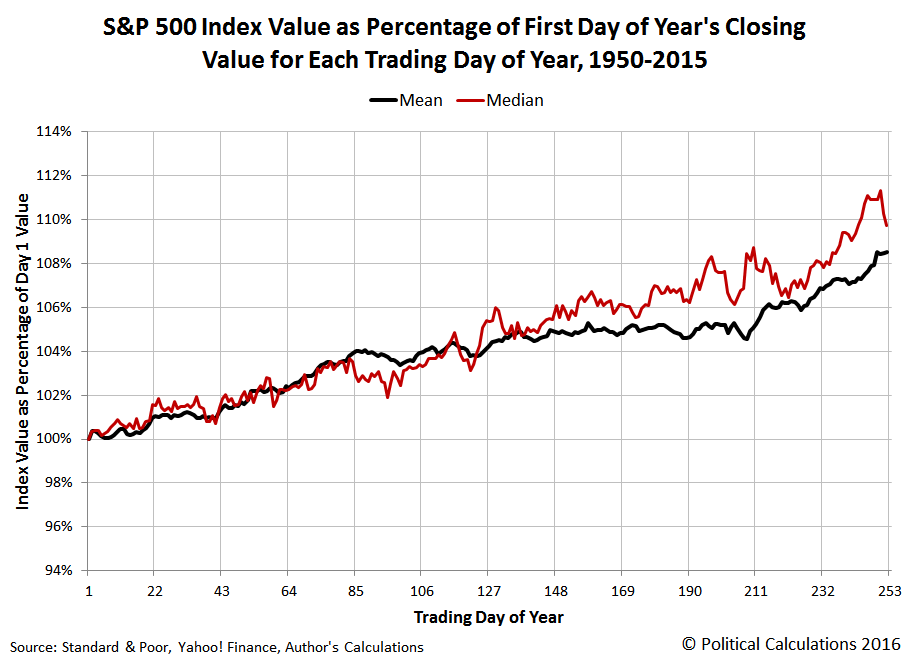 The median values shown above represent the actual values at the middle of the range of values we calculated for each trading day from 1950 through 2015. The average values reveal the extent to which abnormally strong or abnormally weak performances in particular years within the sample either pulled the mean trajectory above or below the median recorded value.

We'll leave it up to you to decide which is more "typical" of the historic annual trajectory of the S&P 500!