Political Calculations
Unexpectedly Intriguing!
July 22, 2016
The Up and Coming Math 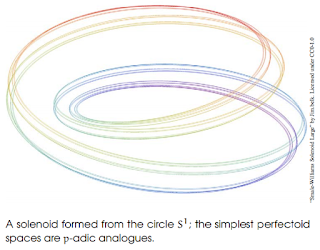 There are some really exciting developments starting to bubble up like perfectoid spaces in mathematics.

Talk about a sentence that we never thought we'd ever write, because:

It's that second thing that's motivated us to write on the topic today.

Here's the best, simplest description we could find of what they are (we've added the links to good starting point references for the different mathematical fields mentioned):

Scholze’s key innovation — a class of fractal structures he calls perfectoid spaces — is only a few years old, but it already has far-reaching ramifications in the field of arithmetic geometry, where number theory and geometry come together.

By far reaching ramifications, they're referring to the use of the new tool to greatly simplify mathematical proofs, such as Scholze did in rewriting a proof of the Local Langlands Correspondence, which had originally required 288 pages, in just 37 pages.

That's possible because of what perfectoid spaces can do in being able to transform very difficult math into much easier math to do, which was Scholze's breakthrough in the field (we've added some of the links in the following passage again for reference purposes).

He eventually realized that it’s possible to construct perfectoid spaces for a wide variety of mathematical structures. These perfectoid spaces, he showed, make it possible to slide questions about polynomials from the p-adic world into a different mathematical universe in which arithmetic is much simpler (for instance, you don’t have to carry when performing addition). “The weirdest property about perfectoid spaces is that they can magically move between the two number systems,” Weinstein said.

This insight allowed Scholze to prove part of a complicated statement about the p-adic solutions to polynomials, called the weight-monodromy conjecture, which became his 2012 doctoral thesis. The thesis “had such far-reaching implications that it was the topic of study groups all over the world,” Weinstein said.

When we discuss math, we like to focus on the practical applications to which it can be put. In this case, mathematician Bhargav Bhatt, who has collaborated with Scholze on several papers, gets to the bottom line for why perfectoid spaces will matter for solving real world problems (reference links added by us again).

Namely, as perfectoid spaces live in the world of analytic geometry, they actually help study classical rigid analytic spaces, not merely algebraic varieties (as in the previous two examples). In his “p-adic Hodge theory for rigid-analytic varieties” paper, Scholze pursues this idea to extend the foundational results in p-adic Hodge theory, such as Faltings’s work mentioned above, to the setting of rigid analytic spaces over Qp; such an extension was conjectured many decades ago by Tate in his epochmaking paper “p-divisible groups.” The essential ingredient of Scholze’s approach is the remarkable observation that every classical rigid-analytic space over Qp is locally perfectoid, in a suitable sense.

Which is to say that a whole lot of problems that have proven to either be very difficult to solve or have evaded solution by other methods might yield easily to solution by the newly developed mathematical theory of perfectoid spaces. For a field like mathematics, that's a huge deal!

We'll close with Peter Scholze speaking on perfectoid spaces in 2014.