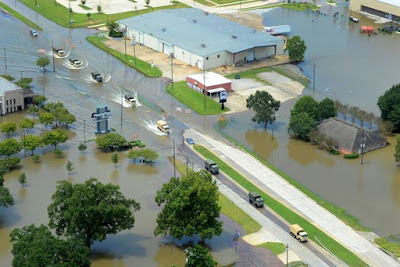 InsureBlog's Hank Stern reached out to us last week in connection with an effort to link blogs and other social media outlets with support for much needed disaster relief in the flooding-struck Gulf Coast region of the U.S. We're going to keep the ball rolling by pointing to a number of disaster relief resources that should draw your attention no matter where in the world you are.

With much of the worst flooding having taking place in Louisiana's Acadiana region, a great place to start identifying ways to make the biggest difference with your donation or your volunteer efforts can be found through Baton Rouge's CBS affiliate WAFB's site, which has been regularly updating a list of needs and volunteer opportunities in the region.

We've also selected a handful of charitable organizations that are focused on providing disaster relief across Acadiana, which are tied to national organizations that have been ranked highly by Consumer Reports and the Christian Science Monitor for their effectiveness in putting donated funds into real relief efforts.

The American Red Cross has channels to either support taking your donations to support their efforts or to direct you to where hands-on volunteers are needed, including for blood donations.

One of the things we learned during the aftermath of Hurricane Katrina is how rapidly available blood supplies across the nation can dwindle because of the disruption of blood donations in the disaster-affected area of Louisiana and the Gulf Coast. Going to your local Red Cross or UBS blood donation center or participating in a blood drive can do a lot to alleviate a potential shortage that would now in the making.

Much of the flooded area falls within the parishes served by the archdiocese of New Orleans, which has a well established distribution network to provide disaster relief services in this area.

The Baton Rouge, Louisiana Corps of the Salvation Army is actively engaged in providing assistance to families displaced by flooding and is also very much in need of volunteers to support its efforts.

There are two branches of United Way that are well positioned to provide disaster relief: United Way of Acadiana and United Way of Southeast Louisiana, both are accepting online donations.

We would be remiss if we didn't recognize how social media is making disaster relief efforts more effective. To that end, we're really impressed by an organization that didn't exist during the days of Hurricane Katrina, but which has already made a big difference in its short history: Crisis Cleanup. Here's a good description of what they're about:

You don't. You let them organize themselves.

Crisis Cleanup was developed by and for field volunteers, team leaders, canvassers, and the people who work one-on-one with survivors whose homes have been affected by flood, tornadoes, earthquakes, wind, fire, or other disaster. Crisis Cleanup can respond to a new disaster the same day, permitting relief organizations to instantly coordinate efforts.

Crisis Cleanup implements a "Craigslist" philosophy to recovery efforts– organizations that are aware of work orders enter them into the system, and organizations with capacity to help can claim and perform the work. The system is not public, but it is open and transparent among participating organizations. No centralized organization is "in charge." This non-threatening approach minimizes duplication and maximizes communication, coordination, and efficiency.

While entering a client into Crisis Cleanup does not guarantee that he or she will be served, it guarantees visibility and maximizes the chances for assistance, while helping relief organizations prioritize their limited resources.

It's been over 10 years since the flooding from Hurricane Katrina demonstrated the need for this kind of decentralized coordination tool for making relief efforts more effective. We're excited to see this particular evolution in how disaster assistance is directed.