Periodically in the course of the various projects we're developing, we come across data that's interesting in and of itself. Today, that data is about the business of business jets, in which we're looking at the number of new business jets manufactured in the United States in the years from 2002 through the present. 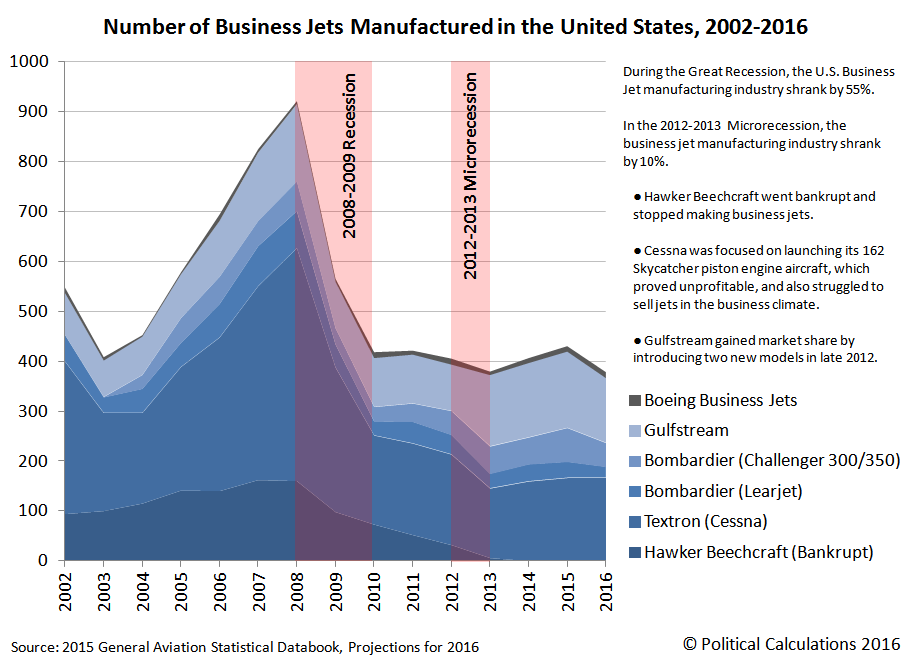 When new, business jets can carry price tags of anywhere between $3 million and $65 million, where at the typical sales price of $20 million for a midsize business jet, a change of just 50 sales in a single year can represent a billion dollar swing in the economy.

That makes the 55% decline in the industry that occurred in 2009 and 2010 an especially dramatic event. Lagging behind the official starting and ending dates of the Great Recession, the U.S. business jet industry effectively shrank its annual production by somewhere in the ballpark of $10 billion.

Something similar happened on a considerably smaller scale between 2012 and 2013, where the total number of business jets made in the USA fell by 10%. That microrecession directly led to Hawker Beechcraft's bankruptcy, where the company discontinued making business jets altogether as part of its subsequent reorganization. The company today is owned by Textron (NYSE: TXT), the parent company of Cessna, which manufactures a line of small to mid-size business jets.

Cessna's production was also hammered during the Great Recession, like all manufacturers, and uniquely between 2012 and 2013.

Sales of business jets were expected to improve in 2013 after being hit last year by fears of a "fiscal cliff". However, mandatory U.S. government spending cuts have made small business owners - Cessna's main customers - cautious about big purchases.

Global shipments of business jets fell 4 percent to 283 aircraft in the first half of 2013, according to GAMA, which represents more than 50 fixed-wing aviation aircraft makers, including Cessna.

Part of that negative business climate was directly generated by President Obama, who specifically targeted the buyers of business jets for criticism during his first term and also during the 2012 presidential debates. President Obama also proposed the budget sequester that produced the cuts in federal government spending cited by small business leaders as a leading reason for why they put off acquiring business jets during this time.

The only U.S. business jet manufacture to gain market share during this time was Gulfstream, a wholly owned subsidiary of General Dynamics (NYSE: GD), thanks largely to the introduction of two new models in late 2012, the G280 and the G650, the latter of which opened up a new niche in the business jet market: large-cabin executive jets. These new planes would fall in between the mid-size cabin aircraft manufactured by Cessna and Boeing's converted commercial transport aircraft, and proved especially popular with global customers, particularly in the Middle East.

Flashing forward to 2016 however, reports indicate that the market for Gulfstream's large-cabin business jets has begun slipping compared to previous years, while Canada's Bombardier, which manufactures Learjets and its Challenger 300/350 model in the United States, has seen sales drop by nearly one third. At the same time, Cessna's sales are projected to rise during the year, thanks in part to new models it has begun producing.

And then, there's Boeing, whose business jet business represents a small fraction of its overall sales, which are pretty stable from year to year at a very low number.