We're catching up with two weeks worth of action in the S&P 500, so let's start with what stood out during Week 3 of November 2016.

First and foremost, our prediction from five weeks ago appears to have held throughout nearly every trading day of the last five weeks, with the S&P 500 actual values consistently falling within 3% of the red-dotted line that we sketched on top of our standard forecasting model to anticipate its future trajectory at that time, as almost indicated by the hand-drawn red-shaded region (since we drew it slightly narrower than intended). 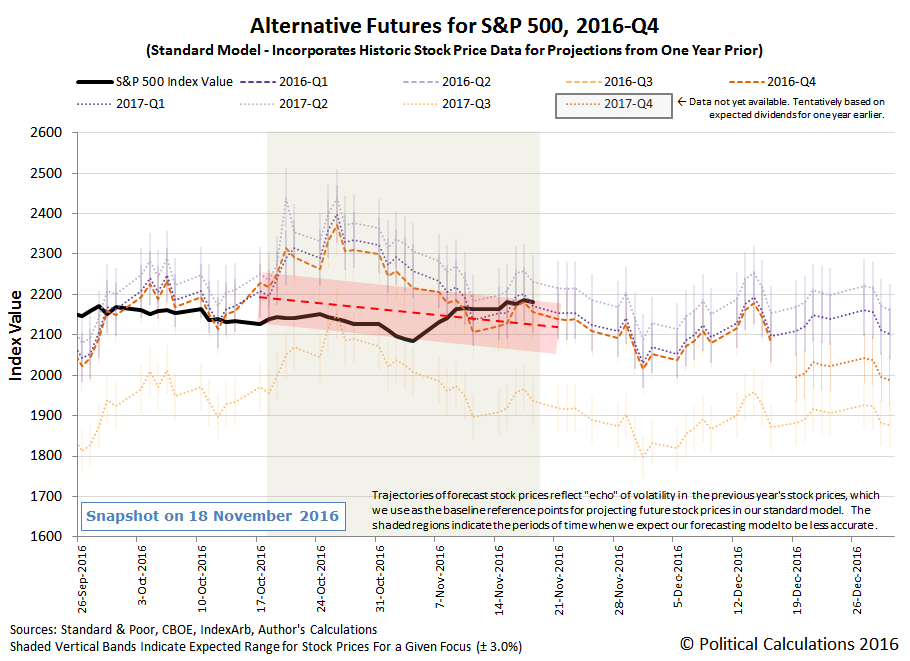 In the chart above, our hand drawn forecast applies only to the period where our standard model would be affected by the echo effect from past volatility (indicated as the brown-shaded region), which is an artifact of our model's use of historic stock prices from 1 month, 12 months and 13 months earlier in its projections of future stock prices. To work around the echo effect, we literally connected the dots corresponding to the trajectory associated with 2016-Q4 on both sides of the period we identified over five weeks ago where we anticipated that our model's projections would be less accurate than usual.

Back then, we assumed that investors would keep their forward-looking focus fixed on the very near term future defined by the expectations associated with the current quarter of 2016-Q4, which we predicted would be the case as investors would be greatly influenced by their concerns over the Fed's plans to hike short term interest rates, where that concern would largely trump (pun intended) any noise introduced by the U.S. national elections.

Speaking of which, the outcome of the elections contributed quite a lot of noise, where the actual trajectory of the S&P 500 swung from the low end of our forecast range to the high end. That said, coming out of Week 3 of November 2016, it would appear that investors remained focused on 2016-Q4 in setting current day stock prices.

Here are the headlines that we identified as being relevant to the stock market in Week 3 of November 2016:

Now, let's move into Week 4 of November 2016, where something more interesting happened in a Thanksgiving holiday-shortened week.

For investors focusing on the future, the big news of the week was the shift in how far forward investors were looking, which changed from 2016-Q4 to 2017-Q2 during the course of the week. 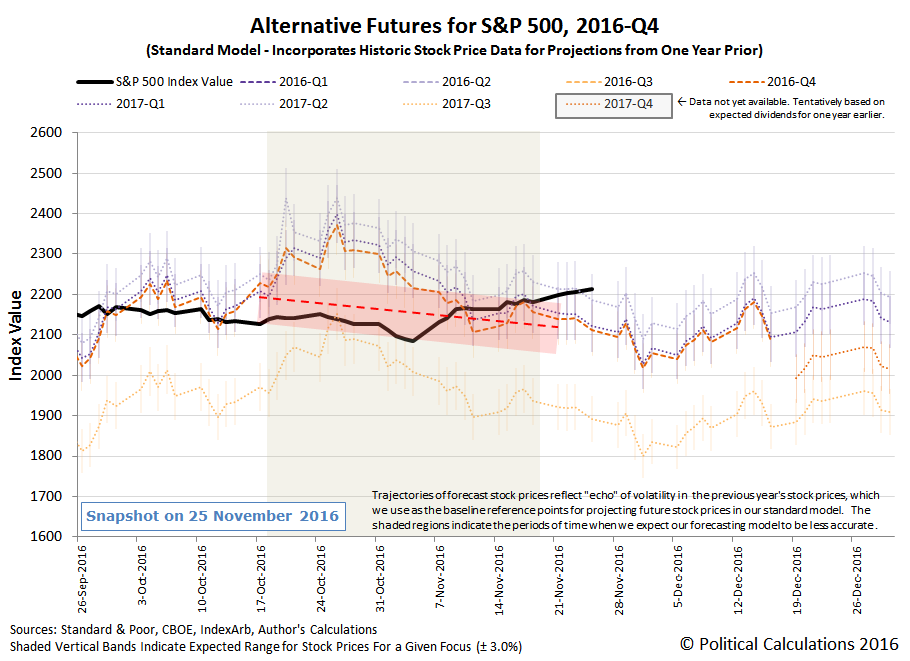 As for what caused that shift, here are the news items for which we took special note of during Week 4 of November 2016.

Elsewhere, Barry Ritholtz divided the economic and market news into its positives and negatives for both Week 3 and Week 4 of November 2016.

Looking forward over the next couple of weeks, in the absence of more fundamental events to change expectations or new noise events, we think that the S&P 500 will continue running to the high side of our forecast range for 2017-Q2, which shows the effects of a small echo from late 2015. That said, pay attention to the difference in where stock prices can be expected to go if investors focus on either 2017-Q2 or 2017-Q3. Unless the expectations for the change in the growth rate of future dividends for 2017-Q3 improves significantly, any news that would reasonably delay the expected timing of the Fed's next rate hike out of 2017-Q2 would likely coincide with a significant downward change in U.S. stock prices.