As promised, we're taking a closer look at the volume of exports of soybeans from the United States to China today, where we find that 2016 is on track to break all previous records. The following chart reveals what we found when we extracted the U.S. Census Bureau's data on the value of U.S. soybean exports to China for each month from January 2012 through the just reported month of October 2016 and the average monthly price per bushel of soybeans over all that time to estimate the equivalent number of bushels of soybeans being shipped from U.S. farms to Chinese consumers. 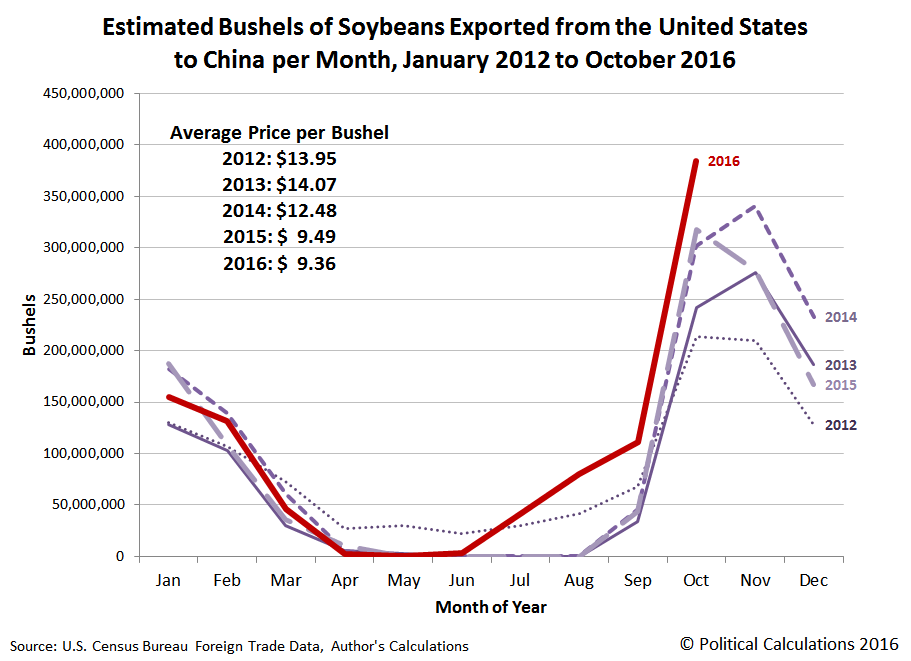 In fact, the outsize volume of soybean exports in July through September 2016 is a major reason why real U.S. GDP growth in the third quarter of 2016 was so unexpectedly strong.

Neil Dutta, the head of US economics at Renaissance Macro, said in a note that these added 0.61 percentage points and 0.83 percentage points, respectively. That implies that GDP excluding trade and inventories rose at a 1.4% seasonally adjusted annual rate, he said.

A closer look at the trade boost to GDP shows that soybean exports were the big driver.

Earlier in October, the international trade report foretold that trade would make a big contribution to growth.

Here's what Jeremy Lawson, chief economist at Standard Life Investments, said in a note about why soybean exports were a huge contribution to growth:

"In a normal year, US soybean exports increase strongly in the winter months after the fall harvest. The Census Bureau then smooths these spikes out through its seasonal adjustment process. This summer, however, soybean exports from South America (Argentina and Brazil are by far the world's largest exporters) have been very weak thanks to a poor harvest, leaving US producers to fill the gap.

"The application of the normal seasonal factors to the unusually large increase in soybean exports has meant that seasonally adjusted food, feed and beverage exports are up 121% in three-month-on-three-month (3m/3m) annualized terms."

So there's an important seasonal distortion to the numbers — albeit a boost — that should not be overlooked.

What we see in the data for October 2016 is that factor looks like it could boost the reported real GDP of the U.S. economy in the fourth quarter of 2016 and would boost it if soybean buyers elsewhere in the world were pulling their weight.

It is also important to recognize that this boost to the U.S. economy is coming as China was not able to purchase the volume of soybeans that it would otherwise have done from the southern hemisphere nations of Brazil and Argentina, whose soybean exports would ordinarily peak in the second quarter of each year.

We should also note that the shortages resulting from poor soybean harvests have boosted soybean prices in 2016 above what they would otherwise be in times of better harvests for them in these countries.

These reasons are the real contributing factors to why U.S. soybean exports in 2016 are really less impressive than they might at first seem, where their contribution to U.S. GDP is not likely to be repeated in 2017.