The Presidents Day holiday may have shortened the trading week that was the fourth week of February 2017, but unfortunately, squeezing the entire trading week into just four days didn't make the market's action any more interesting, despite the setting of new record highs. Our alternative futures chart, where we track actual stock prices against where our standard dividend futures-based model of where stock prices would project them to be based upon how far forward in time investors are collectively looking shows how unimpressive the market's movements have been over the past week. 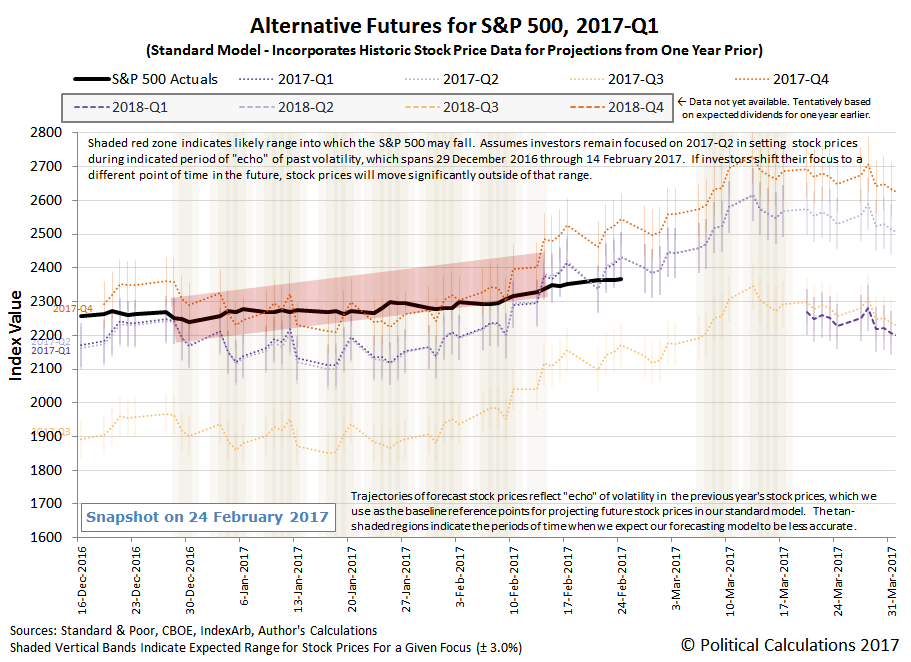 Based on what we observe, the actual trajectory of the S&P 500 is running along the lower half of the range that our standard forecasting model would predict for investors being focused on either the very near term future of 2017-Q1 or the slightly more distant future of 2017-Q2. Which future quarter they're focused upon doesn't make much difference because their projected trajectories are nearly identical, which has been the case since 19 January 2017.

Now, the most likely reason for why investors would be so closely focused on either of these two quarters comes down to the expected timing of its next planned hikes in short term interest rates, which is why we've focused on the news headlines related to the expectations that Fed officials are seeking to set in our summary of the week's market-moving headlines. Which for Week 4 of February 2017, really represents the reasons for why the daily closing value of the market didn't move much at all during the week (considering that they were already focused on either 2017-Q1 or 2017-Q2 coming into the week)!

On a side note, with the Fed ending its Zero Interest Rate Policy (ZIRP), we've noticed an increase in interest in our "Reckoning the Odds of Recession" tool, which we haven't had much need to pay attention to over the last eight years with the Fed essentially holding its thumb on the scale for short term interest rates. For what it's worth, we think that the scale is still showing the signs of the Fed's heavy thumbprint upon it, so we think that it will still be some time before it might begin delivering useful information on recession probabilities for the U.S. economy.

Going back to the week that was, Barry Ritholtz has outlined the pluses and minuses for the U.S. economy for the trading week that ended on Friday, 24 February 2017.

Going forward to the week that will be, the next edition of this series will be for Week 1 of March 2017, keeping with our practice of assigning those weeks with a split in days between months to the month that supplies the most trading days!