How well can dividend forecasts for individual stocks predict their future prices?

That's a question that we took on earlier this year, where we resuscitated an old stock price prediction technique to see how well it might work to identify potential investment opportunities for five companies, whose stocks had been identified as strong candidates for dividend increases during 2017-Q1. The five stocks and their dividend increase forecasts were:

We then took annual dividend data and the stock prices recorded for each of these firms on the first day of trading in each year going back over the last several years, and plotted a relationship between them. We then used that relationship to identify if any stock prices in early 2017 were either potentially overvalued or undervalued with respect to the trends we identified. And then we sat back until we had results to see how the stock prices for each changed after they declared their dividends during the quarter.

We now have the results for 4 of the 5 companies, where we're only awaiting TJX's next dividend declarations to officially close the books on this experiment. The following chart shows the historical data we used to generate the trendlines for each stock, their forecast annual dividend for 2017, where their stock prices went on the day they declared their dividends and also where they were as of the close of trading on 20 March 2017. 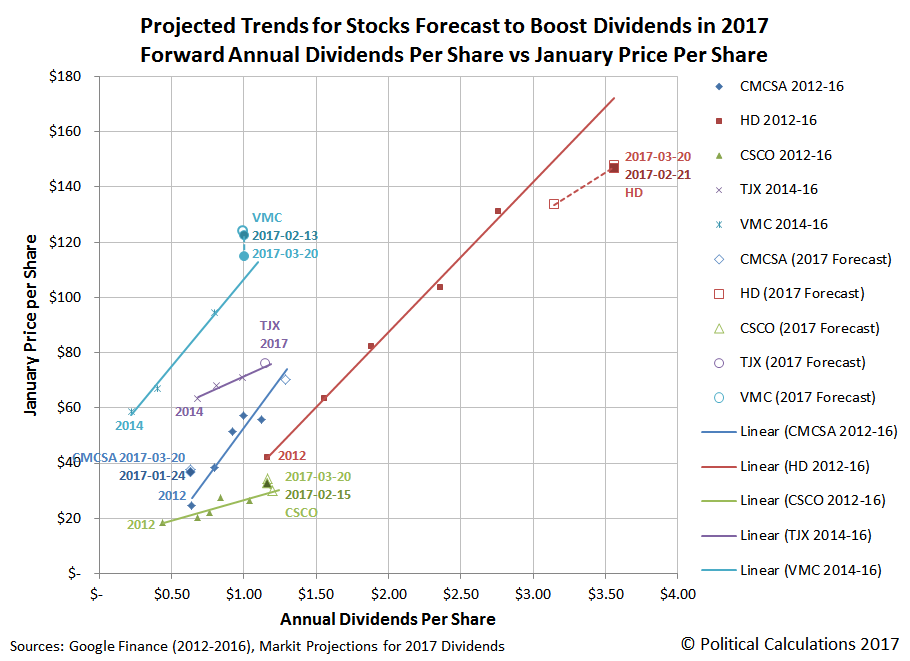 In our original forecast, we had only identified two stocks that offered any sort of investment potential based on the value of their stock prices with respect to their trendlines: Home Depot (NYSE: HD), which looked to be undervalued, and Vulcan Materials (NYSE: VMC), which looked to be overvalued.

In the nearly two months since that analysis, we see that both assessments were correct. In VMC's case, we see that as VMC's dividend came in as expected, its stock price has moved downward to converge with its trendline. In Home Depot's case however, we see that company's dividend hike was far in excess of what had been forecast for it as the company reported a blowout quarter, where its stock price has risen, but not as strongly as its trendline would have suggested it might. And in truth, it has been diverging away from its historic trendline even as it has risen, which perhaps suggests that older trend may no longer be in effect and needs to be redrawn.

There was one real surprise for the quarter where these five stocks were concerned. Bucking the best-laid plans of professional dividend forecasters, Comcast (NASDAQ: CMCSA) pulled a fast one and split its stock on a 2:1 ratio, halving its dividend and very nearly also its stock price! The fun part of that change is that the stock price appears to have continued to track along its trendline, although it is now on the high side of it, suggesting that the stock is somewhat overvalued. Meanwhile, the stock price for Cisco Systems (NASDAQ: CSCO) behaved almost exactly as expected, keeping comparatively close to both its forecast and its historic trendline.

After TJX has declared its next dividend, which we think will be in April, we'll update the original version of this post on our site.