Previously, in looking at the total market cap of the new homes sold in the United States, we found that the market for new homes in the U.S. began to noticeably decelerate after September 2016. 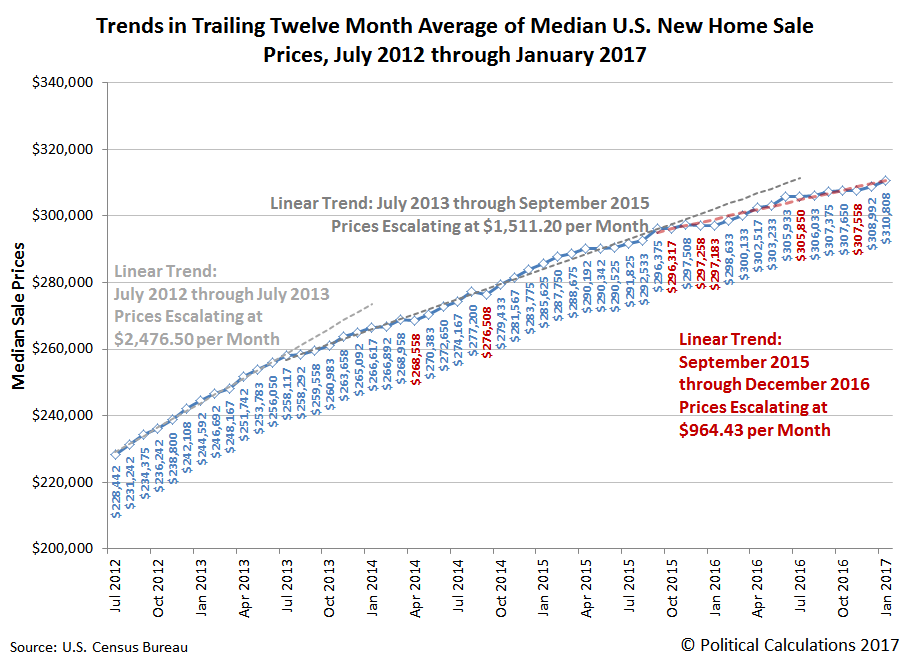 In this chart, we see that after having risen at a relatively slow pace in the months from August through October 2016, they briefly dipped in November 2016, before rebounding to rise at a somewhat faster pace than they had in the months preceding November 2016.

But since the market cap was falling from October 2016 onward, that combination can only mean that the number of new homes being sold was falling more sharply than their sale prices were rising. And sure enough, we do see that after spiking in July 2016, the number of new home sales was rising slowly up to November 2016, after which they dropped sharply in December 2016. 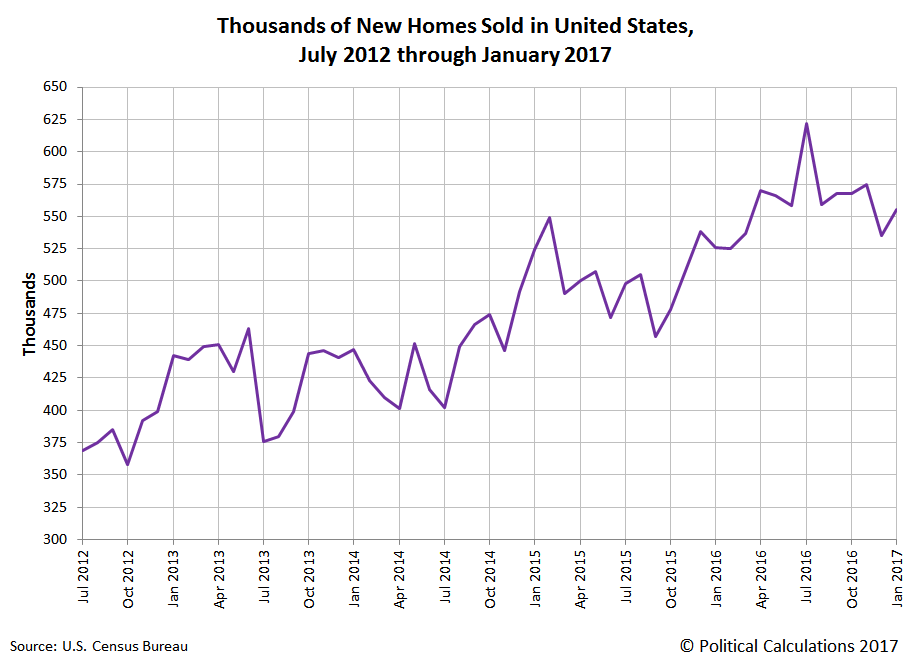 Before we continue, we should note that the most recent three months of data shown in the charts above are still subject to revision, so the price and quantity data for new home sales during the months of November 2016, December 2016 and January 2016 may all change during the next several months.

Back to the topic at hand, one obvious candidate to consider that could potentially explain what we see in both the price and quantity data for new home sales is mortgage rates. The following chart shows how the average interest rates for conventional 30-year have changed from month to month from July 2012 through January 2017. 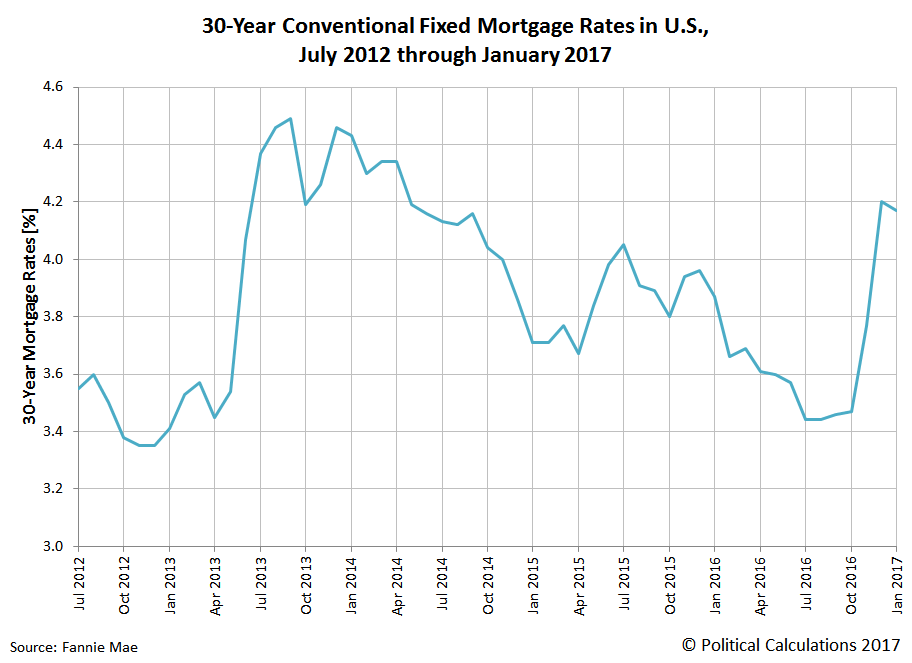 In December 2016, the average 30-year fixed interest rate mortgage in the U.S. rose by 0.43 points to 4.20% from the previous month, which just happened to be nearly three-quarters of percentage higher than where it had bottomed in July and August 2016.

But that is not the only factor behind the stalling of the new home market in the U.S.

Let's next update our chart showing the relationship between the trailing twelve month average of median new home sale prices and median household income, which we'll do for the period from December 2000 through January 2017. 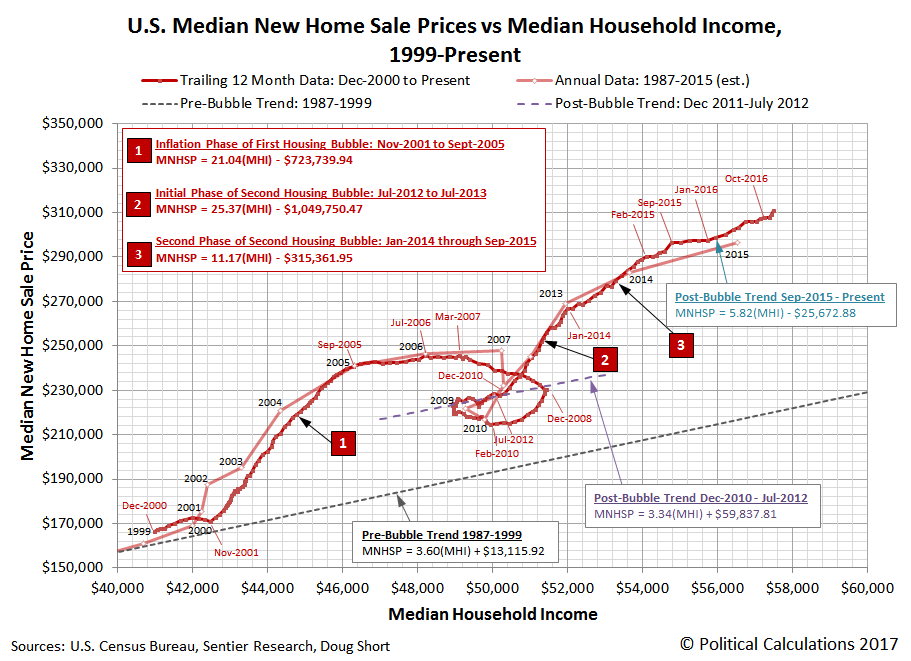 In this chart, we can confirm the generally rising growth trend for median new home sale prices, but we also see a slowing growth trend for median household income in the latter half of 2016. The following chart shows just median household income in both nominal (current dollar) terms and in real (constant January 2017 U.S. dollar) terms. 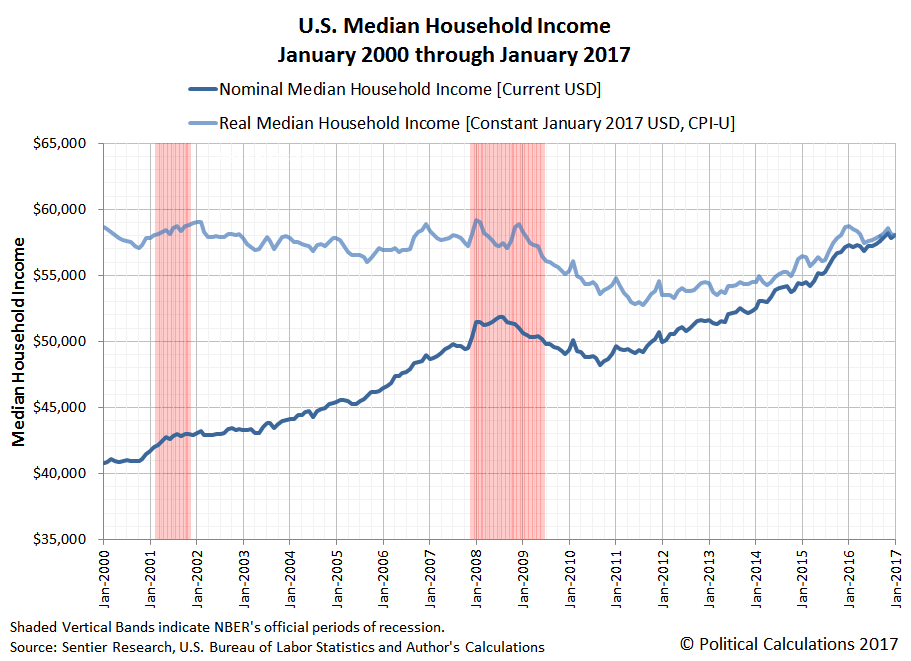 The final chart we'll share today will look at the median household income data again, but this time, measured as the year over year growth rate for the nominal and inflation-adjusted data. Since we only have the monthly median household income data back to December 2000, we'll show the year over year growth rates from January 2001 through January 2017. 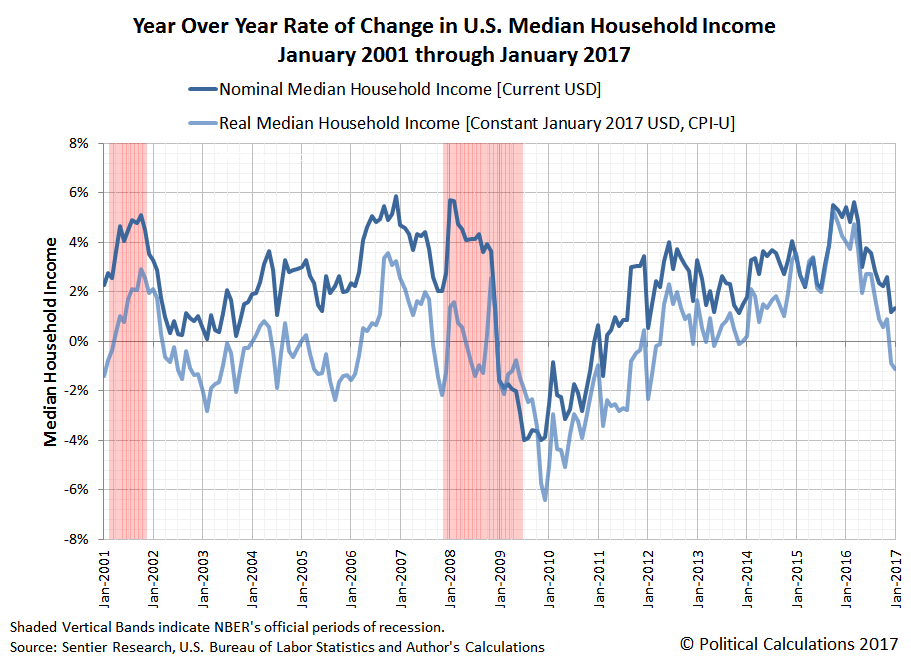 Measured year over year, we see that the growth rates of both nominal and inflation-adjusted median household income in the U.S. began to sharply decline after March 2016. As of December 2016, the year over year growth rate of the inflation-adjusted median household income had fallen significantly into negative territory for the first time since early 2012.

So, the slowing market cap for new homes in the U.S. in the latter part of 2016 is a consequence of the combination of rising new home sale prices, substantially fewer new home sales (which is likely contributing to the rising prices), rising mortgage rates, and slowing or falling household income growth. With that kind of negative momentum, is it any wonder that the Fed has sharply reduced its nowcast for GDP growth estimates in 2017-Q1?