BillyPenn ran the following headline, which suggests that things might be looking pretty rosy for the city's coffers:

And so they would seem to be! Here are the figures for the revenues collected by the City of Philadelphia from its controversial soda tax from the article, which update previously reported numbers for January and February 2017, and provide a preliminary value for March 2017:

Sugary beverage tax collections increased in Philadelphia this month by nearly a million dollars compared to the previous month, the city's Department of Revenue announced today.

So far, the city has received $7 million in collections for the month of March for the three-month-old sugar-sweetened beverage tax. Those taxes were due April 20. That's well over the $5.9 million revenue collected in February following the first month of the soda tax and also an increase over the $6.2 million collected in March following the second month.

That's three months worth of data, so let's summarize how much of Philadelphia's soda tax was collected for the months of January, February and March 2017, as well as describe how the earlier data was revised:

Those figures seem like an improving trend, however as we're about to demonstrate, they also reveal that Philadelphia's soda tax collections are consistently falling between 8-to-10% short of the figures that the city's politicians were anticipating they would be collecting.

That assessment is based on our estimates of the soda taxes that would need to be collected each month based upon the seasonal pattern for U.S. soft drink consumption to add up to the $92.4 million that Philadelphia's mayor and city council were counting upon to pay for new pre-Kindergarten schooling, "monumental" public park improvements, and to fund generous raises for the city's unionized employees among other general expenses. The following chart updates the previous edition to take the city's newly reported and revised sweetened beverage tax revenue data into account. 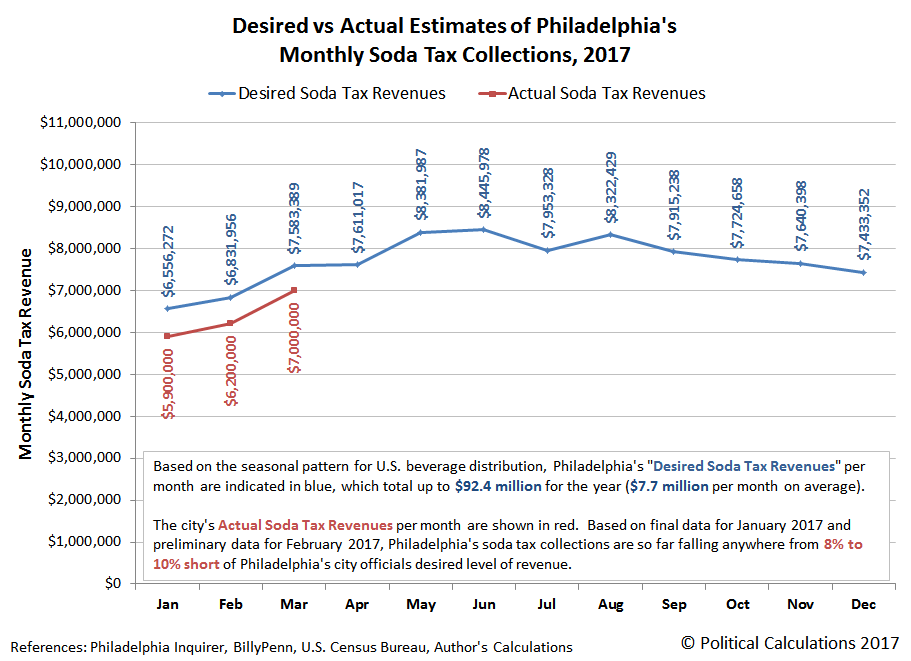 If the current pattern for the soda tax collections continues through the whole year, the city of Philadelphia will find itself somewhere between $7.4 million and $9.2 million short of the total funds that its politicians are depending upon to fund their goals for new spending, which would put the city's total soda tax collections for the year somewhere between $83 million and $85 million.

For their part, Philadelphia city officials are holding out hope that they will succeed in collecting every dime they thought they would in 2017:

City officials wrote in a news release that Department of Revenue officials "remain confident" the tax will reach its fiscal year 2017 goal of bringing in $46 million (which covers six months of beverage distribution). The city expects to make more than $90 million over a full year of the beverage tax.

To hit their stated mid-year target of $46 million worth of soda tax collections, Philadelphia's city government will need to collect an average of nearly $9 million per month from April through June 2017.

But if the current pattern for the city's sweetened beverage tax revenues holds and the city's soda tax revenues fall short, it will be interesting to see which political constituency within the city will get stiffed because the city's leaders didn't get all the money they were counting upon.