By staying the same, we're referring to the relative lack of change in the closing value of the S&P 500 on each trading day of the first week of April 2017. 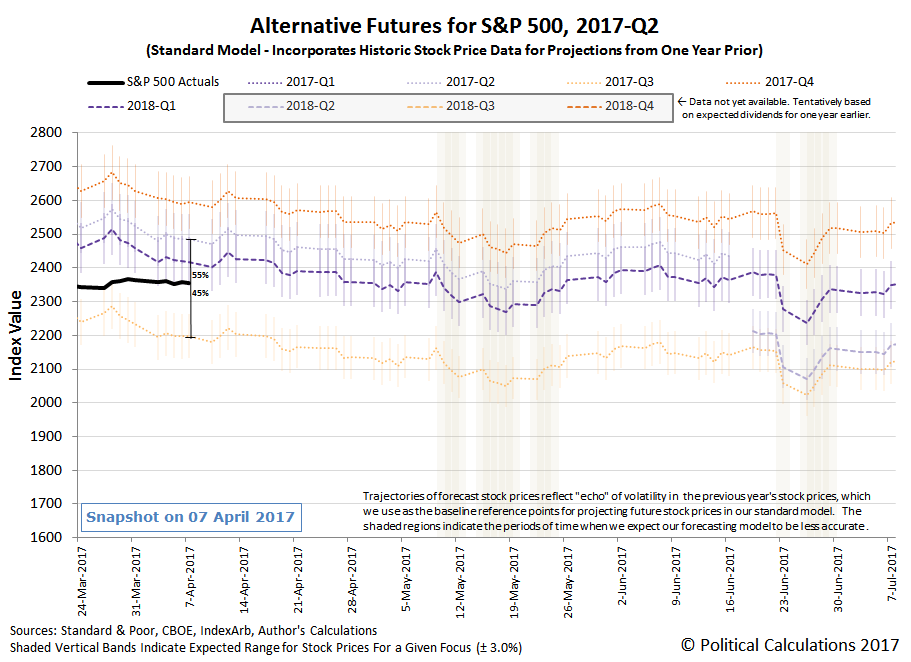 But over Week 1 of April 2017, we see a change in the future expectations that investors have. Specifically, investors would appear to have flipped the relative probabilities that they were assigning to the likelihood that the Fed will next hike interest rates in 2017-Q2 and 2017-Q2 from where they had set them a week earlier.

This week, thanks to the heavier weight of positive economic news that came out during the week, it appears that those relative probabilities have reversed to where investors are giving a 55% chance that the Fed will hike U.S. interest rates before the end of the quarter, and a 45% chance they'll hold off on doing so until the next quarter.

And all stock prices had to do to communicate that change in expectations was to mostly drift sideways to slightly lower as investors modestly reacted to the non-market moving news released throughout the week, where even the surprise U.S. bombing of Syria following reports of its government's use of chemical weapons in its civil war did little to roil the U.S. stock market.

That's not to say that other markets were not greatly affected by other news that came out during the week, but since we focus on the S&P 500, we have to play the cards that we've been dealt....

Speaking of which, here are the headlines that stood out from the pack for Week 1 of April 2017.

Elsewhere, Barry Ritholtz categorizes the week's positives and negatives for the U.S. economy and markets.

Finally, on a programming note, since U.S. markets will be closed on Friday, 14 April 2017, so will we! Have a great, short week!