There's an old saying among coders, the polite phrasing of which goes as follows: "To err is human; To really foul things up requires a computer."

We definitely had a mischievous daemon do a number on us last week, where we managed to repeatedly refer to Week 2 of April 2017 as being Week 3 of April 2017, with all references to the week being consistent with a week further ahead in time than the week we were describing (now since fixed)!

So if your last contact with us was that post, and you've now come across this one, that's why it seems like we're talking about the third week of April 2017 again, when in reality, we really are reviewing Week 3 of April 2017 this time. Really!

So let's start with the most significant observation we can offer about what happened to the forward-looking outlook of S&P 500 investors during the third week of April 2017, where we think that the news of the week combined with the onset of earnings season to shift investors more strongly toward focusing on the current quarter of 2017-Q2 as being the most likely period in which the Fed will next hike short term interest rates in the U.S. by what appears to be a 2-to-1 margin. 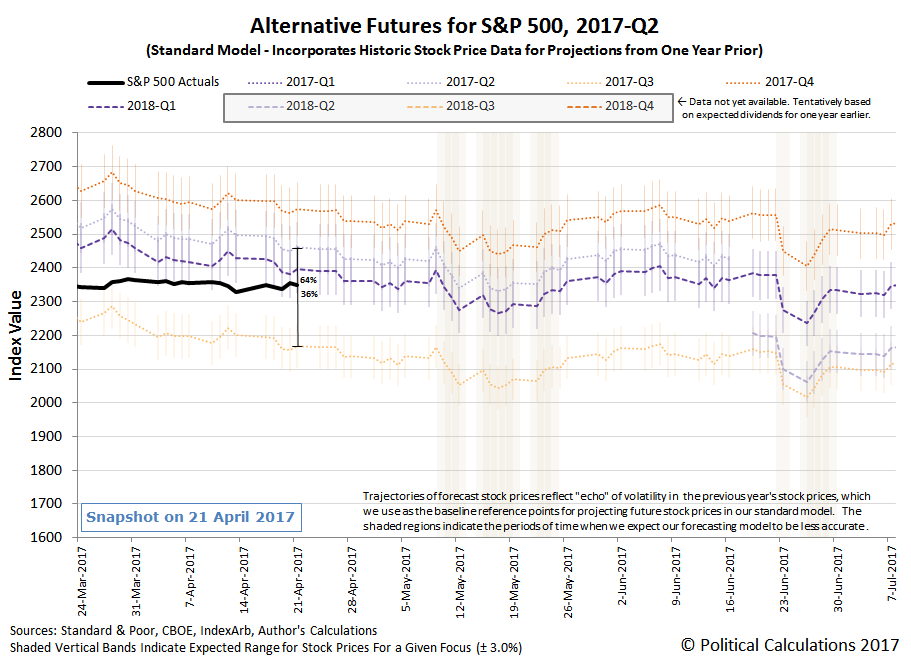 That's a significant shift compared to what we've seen over the last several weeks, where that probability has ranged near the 50-50 mark, keeping within a narrow margin of an even split.

As for why that's our thinking, here are the headlines we flagged during the week to provide the context in which stock prices reacted. You'll notice that we're starting to pick up news headlines related to the potential shutdown of portions of the federal government as early as Week 4 of April 2017, mainly because it's another element of noise to add on top of the noise from other geopolitical concerns. Outside of noise, history indicates that particular event would be pretty much of a nonfactor where the stock market is concerned, where even a prolonged event would have little to no economic impact as well.

This was a day that began and ended in France as a greater geopolitical concern....

That's it for the overall context of the market's forward-looking concerns this week, where we've definitely erred on the side of documenting the week's high noise to signal ratio. Be sure to follow this link for Barry Ritholtz's succinct summation of the week's pluses and minuses for the U.S. economy and markets for that additional context and a touch more signal.