The second week of April 2017 had bigger negatives than positives for the U.S. economy and markets, with stock prices behaving accordingly during the week. In this case, we think that those negatives led investors to bet that the Fed would delay the timing of its next expected rate hikes into the third quarter of 2017, which pulled the S&P 500 closer toward where our dividend futures-based model projects that stock prices would be if investors were fully focused on that period of time in the future. 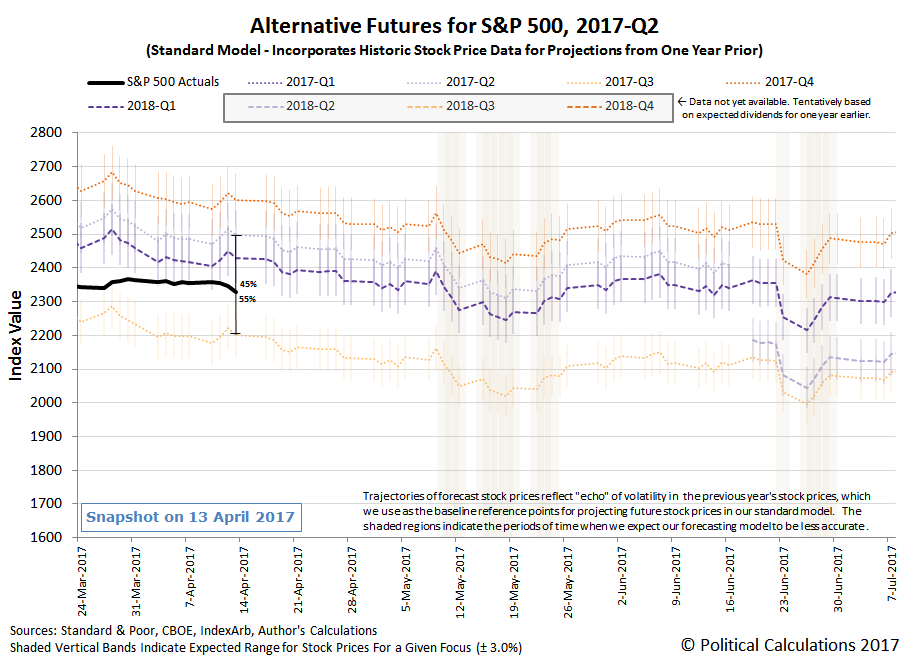 In the chart above, we observe that investors are still splitting their forward-looking focus between the current quarter of 2017-Q2 and 2017-Q3, where the weighting between these two quarters is now tilted slightly more heavily toward 2017-Q3.

The big reasons for that change are evident from the news for the week. First, from the perspective of economic fundamentals, banking stocks declined because of an apparent deceleration in the rate of growth for their lending operations.

The second reason has more to do with the effect of noise, in this case, arising from geopolitical concerns. Here, our thinking is the increase of tensions between the U.S. and Syria, increasing tensions with North Korea, and also the deployment of the U.S.' largest aerial-delivered ordnance in Afghanistan during the week is contributing to the future outlook of investors in that they are betting that the U.S. Federal Reserve will be more likely to pursue a policy of greater stability with respect to U.S. interest rates, which would be realized by the Fed keeping interest rates steady for a longer period of time.

Combined, these two events, one fundamentally-driven and one noise-driven, led investors to collectively refocus their attention away from 2017-Q2 and toward 2017-Q3 instead.

The interesting thing about this dynamic is that our model indicates that stock prices have considerably more room to move toward either quarter than was the case for the investing outlook during 2016-Q4 and 2017-Q1, when investors could shift their forward-looking attention between the future quarters of 2017-Q1 or 2017-Q2 without any noticeable impact on stock prices. We estimate that there's currently a potential 300 point spread between the alternative trajectories for the two quarters, where as of 13 April 2017, stock prices could fall by more than 130 points if investors were to fully focus on 2017-Q3.

But whether it might will depend upon what new information investors learn during the weeks ahead. As for what news influenced investors in Week 2 of April 2017, just scroll down for our summary of what we identified as the week's more significant headlines.

Barry Ritholtz summarized the holiday-shortened week's positives and negatives for the U.S. economy and markets.