We're surprised that nobody has put this information together before now, but here's the quick tally of jobs gained and lost as a direct consequence of Philadelphia's controversial soda tax. First, here's the positive side of the jobs ledger:

Here's the negative side of the jobs ledger:

The following chart shows how the jobs gained compare with the minimum announced jobs that will be lost. 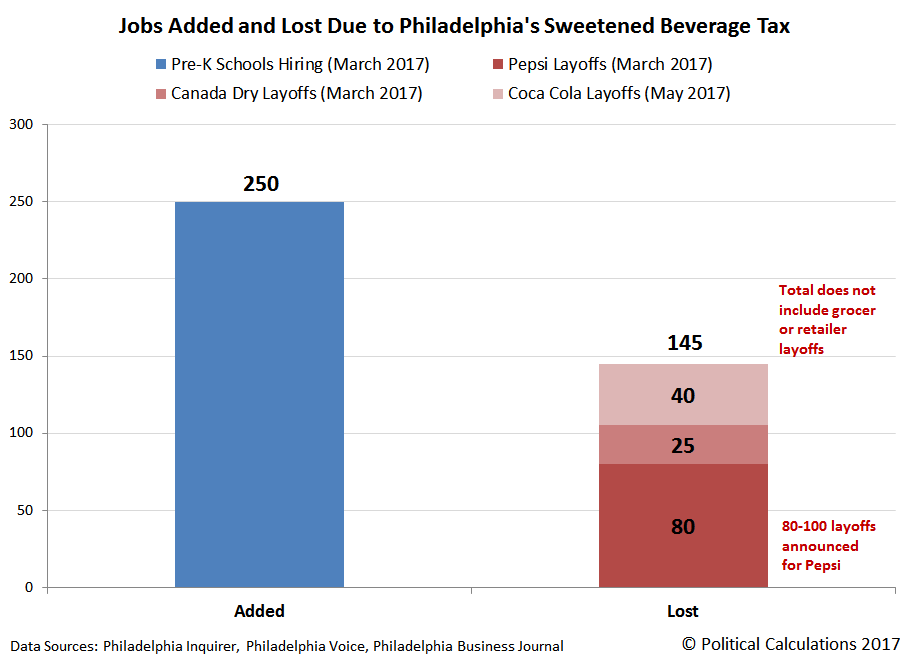 The problem is that at an average wage of $14.72 per hour, the jobs added to support Philadelphia's pre-K school program pay a lot less than the estimated average of $21.50 per hour that the city's bottling plants and distributors were paying the employees who will be losing their jobs as a result of the city's controversial soda tax (based on similar jobs in Indianapolis).

Plus, according to the city's Pre-K enrollment applications, the pre-K jobs only require work during the School District of Philadelphia’s 2017-2018 School Year Calendar, which only covers nine out of the twelve months of the year. The school schedule covers less than seven hours per day, four days a week, with a just over a half-day on Fridays.

By contrast, the job layoffs affecting the employees of Philadelphia's beverage producers and distributors are mostly hitting people who work 40 hours per week, all year round.

In the following chart, we'll estimate the aggregate annual incomes for the jobs being added and lost in Philadelphia due to the city's sweetened beverage tax. 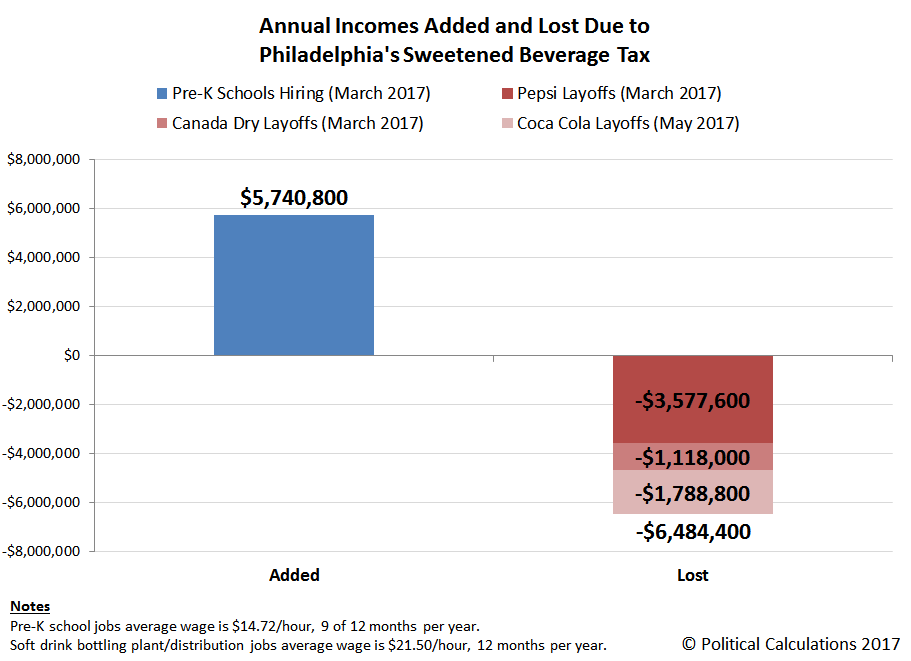 We find that at a minimum, the city's economy is losing more income than it is gaining through this point in time. We should also note that the negative $743,000 gap in the annual incomes between jobs lost and jobs added is a low end estimate that is based on the minimum announced layoffs attributable to the soda tax to date, where if the Pepsi layoffs total up to 100 (rather than 80), it would represent another $894,000 worth of annual incomes being taken out of the city's economy.

These estimates do not yet extend to job losses or work hour reductions that might also be likely to occur at the city's bodegas, grocers and soft drink retailers, which would further increase the income gap between jobs added and jobs lost.

One factor that would reduce the gap would be the "extremely generous" increase in wages that were awarded to the city's unionized employees at the same time the soda tax was being passed, but since that increase in incomes wasn't the result of adding or losing jobs, we've omitted those incomes from this analysis. Similarly, we have also not considered lost incomes through reduced labor hours.

Finally, we should also note that focusing just on jobs represents just a portion of the lost economic activity that has resulted within Philadelphia as a result of the imposition of its sweetened beverage tax. We'll refine our estimates of the projected deadweight loss to Philadelphia's economy sometime in the near future as new and updated data becomes available.