Earlier in 2017, the state of Georgia ran a social welfare experiment, which resulted in the state decreasing the number of welfare recipients enrolled in the state's Supplemental Nutrition Assistance Program (SNAP) by over 200,000 individuals in a single month.

Georgia's secret? Back in January 2016, the state launched a pilot program in three of the state's counties requiring all able-bodied food stamp recipients without children to find work or lose their SNAP benefits. In August 2016, the state expanded the program to 24 counties, and also set a hard deadline of 1 April 2017 where all childless, able-bodied SNAP beneficiaries in these counties would become ineligible for the state's food stamp program unless they were employed.

The following chart uses available data from the U.S. Census (Excel spreadsheet) and the USDA's Food and Nutrition Service shows the number of individuals enrolled in Georgia's SNAP (or Food Stamp) program from January 1981 through March 2017 to show the impact of Georgia's welfare-to-work initiative: 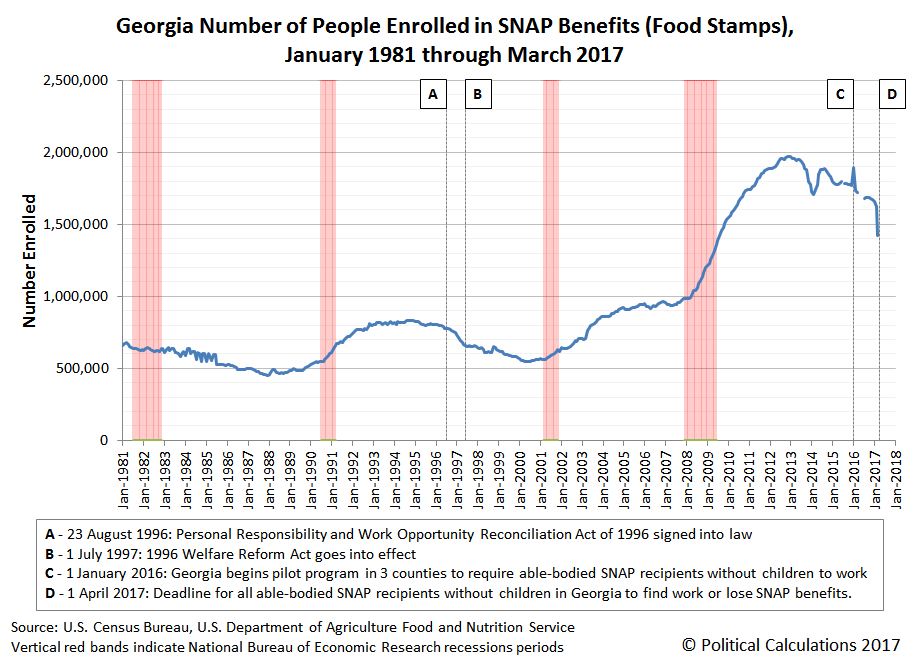 Perhaps the most remarkable aspect of the data is the sheer drop in enrollment levels in the month before the hard deadline came and went, where if jobs were truly hard to obtain for the affected SNAP benefit recipients, we should have seen the enrollment levels stay elevated through March 2017 before seeing such a sharp decline resulting from their loss of eligibility. It also far outstrips the state's previous experience in enforcing work requirements in its food stamp welfare program to reduce its welfare rolls, which came as part of the 1996 Welfare Reform Act.

That's the positive power of incentives. Faced with the hard deadline to get a job before their food stamps ran out, over 200,000 people preemptively entered into the job market in the month before they would lose their welfare benefit.

Better still, there are greater benefits for the state and nation as a whole from Georgia's success (the excerpt from the 24 May 2017 article below references Georgia's SNAP enrollment data through February 2017):

Georgia is seeing a significant decrease in the number of people receiving food stamps as the improving economy lifts many recipients into new jobs and frees them from the fear of going hungry.

The number of Georgians getting food stamps has dropped by 300,000 from 1.9 million in April 2013 to 1.6 million. That decrease of 16 percent in the federally funded program saves taxpayers tens of millions of dollars monthly.

Georgia will expand the state's SNAP work requirements initiative to an additional 60 counties in 2018. Georgia has 159 counties in total, but appears to be prioritizing its more highly populated ones in rolling out its SNAP benefit work requirements, so we would anticipate that future benefit cutoff deadlines won't prompt the same scale of preemptive enrollment declines.

If anyone can point us to where the FNS archives its monthly data for the number individuals covered by SNAP benefits, so we can fill in the missing months of data for 2016 in our chart, we would greatly appreciate it! (Otherwise, we'll have to wait for the U.S. Census Bureau to get around to updating its records.) We do plan to revisit the topic again several months from now so we can see how things evolved in the months following the deadline.